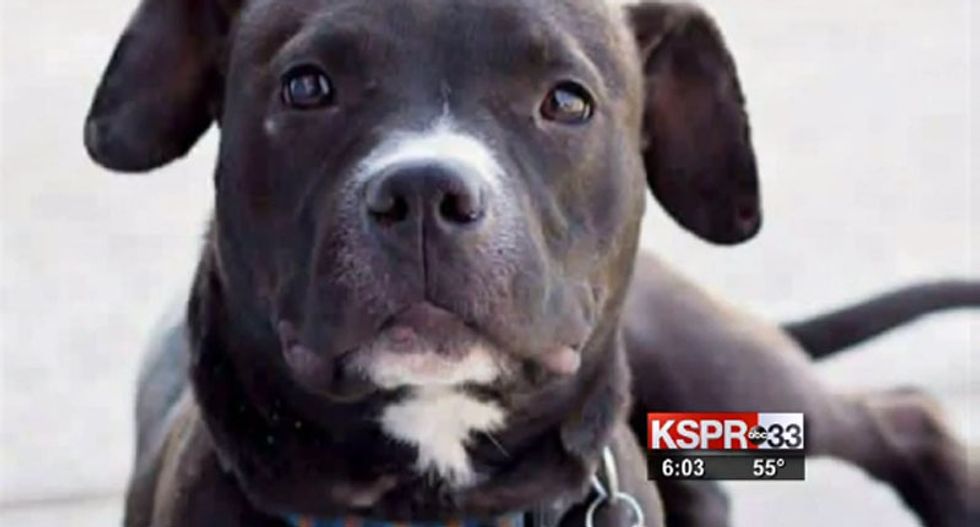 A dog, named Chase, that was shot by a former police chief (KSPR.com)

Police Chief Andrew Spencer resigned this week after it was revealed that he shot and killed an innocent dog that was in a cage and meant no one any harm. To make matters even worse, he took the puppy to a firing range and killed it there because he did not want to deal with finding its home.

Spencer found the dog and managed to get it into a cage using a catcher pole. He then wrote in his report that he had planned to take the dog to a shelter where it would be “destroyed,” but then he got another call about a car accident so he decided to do it himself.

After the fact, Spencer claimed that the dog was charging at people in the neighborhood. However, he said that he did not believe that the dog bit anyone, otherwise he would have had it taken to the vet and tested for rabies.

Also, at the time the dog was shot, it was in a cage and thus not a threat to anyone. If Spencer just had a little bit more patience and compassion, he would have found that the family of the lost puppy was looking all over the town for him. Owner Elizabeth Womack said that her puppy Chase was extremely peaceful and friendly animal.

Womack wrote on her Facebook page how she attempted to contact the police and was lied to on several occasions about the incident. Eventually, she was told by the police Chief that he shot and killed her dog, and that they would be free to identify him if they wanted to go dig him up.

“I was told by a police officer that they didn’t catch any dogs that day. He said they got a call about Chase, but responded to an assault call instead. So we called for a whole week trying reach chief Andrew Spencer. He did nothing but give us a run around for days. So we called all dog pounds and shelters and rescue one where we got Chase from. A few days later we get a call from chief Spencer, saying he had shot a pit bull chow mix that he picked up in the trailer park down the road from us. He told us He buried him in the sludge field if we wanted to make sure it was him. We didn’t find any freshly dug holes anywhere. So we tried the Sparta shooting range but we only found a pile of burnt meth pipes, cell phones and pill bottles. Then we found out from our neighbor on Friday evening that Chase had been picked up from an unmarked police car in front of our house. So we call and call and call trying to get a hold of chief Spencer again. To pick up our dog. Finally, 5 days later, chief Spencer contacted us saying he dug him up and left him at the police station. We picked him up that night after work. He was wrapped in a garbage bag, no traces of dirt on him or the trash bag anywhere. We got the police report. It never showed who he supposedly bit. So we took our fur baby home after searching for him for a week and laid him to rest.”

The excuses Spencer gave for his actions are not acceptable. The dog was in a cage and could have been easily transported while Spencer responded to his other call. The dog could have remained in the car and in the cage as it would be highly unlikely that the entire car would be needed for an accident. If Chase was able to live just a few more hours he would have likely been reunited with his family.