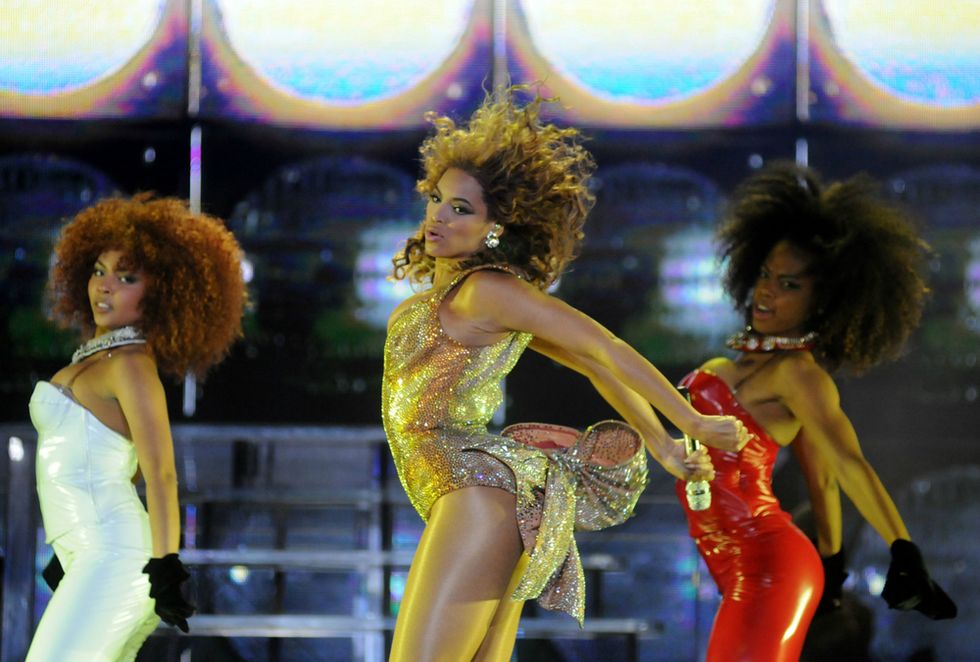 When she declared herself a feminist in blazing lights at the 2014 VMAs, Beyoncé ignited a fierce debate among her fans and critics, who questioned her role in the gender equality movement. Since the release of her visual album and explicit alignment with feminism, her role as a pillar of pop culture has only solidified. Perhaps the greatest signal of her position is this: just the fact that she doesn’t give interviews generates more noise than a single word from anyone else.

But there is one realm where Beyoncé’s influence is not taken as a given: academia. It’s something professor Kevin Allred has been tackling since he first designed his Politicizing Beyoncé course at Rutgers University back in 2010, and which he’s taught for 11 sessions.

Allred crafted the class around Beyoncé’s work, using her artistry and persona as an access point for the study of race, gender and sexuality through a syllabus composed entirely of black feminists.

Through the work of influential writers and theorists such as Alice Walker , Audre Lorde and Chimamanda Ngozi Adichie , he encourages students to interrogate the treatment of black women through Beyoncé’s modern-day commentary.“I wanted to teach a course grounded entirely in black feminism,” Allred told the Guardian. “There are a lot of ways to teach that information, but I thought using Beyoncé would bring a younger and more engaged audience.”

“I think she’s a good lens for the material, because she is a prominent black woman and the only artist putting feminist messages explicitly in her music,” he continued. “She’s dropping all these pieces and asking us to unravel her message. There is so much to work with.”

Perhaps unsurprisingly, Politicizing Beyoncé is among the most popular of the university’s offerings, consistently filling to capacity. But this spring, for the first time since it was reintroduced in the summer of 2014, the class is not being renewed.

“Behind the scenes, they told me that because so many people wanted to take it, it was detracting from other courses,” Allred said. “But beyond that, I have seen a larger issue with Beyoncé intervening in academic debates and black feminism in general.”

Lorenza Jerez, a student at Rutgers, says administrators need to look beyond the title of the class and recognize the importance of its subject matter. “I think the pushback for the course comes from an ignorance to what the class is actually about,” she said. “Some people might hear ‘a class on Beyoncé’ and roll their eyes. Its approach to feminism is just received better [through] a respected artist that we’ve grown up with.”

Allred found out he wouldn’t be teaching the class this spring through a department-wide email. The schedule had been finalized, it informed him, and his class wasn’t listed. The head of undergraduate studies, Nikol Floyd-Alexander, declined to comment beyond confirming the course was no longer being offered.

“Pushback is nothing new,” Allred said. “That started as soon as people heard of the class. You know, ‘Oh my God, my tax dollars are going to a class about Beyoncé?’ ”

Louis Masur, the acting chair of Rutgers’s American studies department, argues that pop culture figures, such as Beyoncé or Bruce Springsteen (the subject of a class he teaches), are worthy of academic pursuit.

“Imagine when the first courses on film and television were offered in history departments and communication departments,” he laughed. “You can have a course on the French revolution that is a joke and a course on Beyoncé that is the most serious course you will have ever taken.”

When Allred proposed his dissertation studying Beyoncé through black feminists, there was hesitation about the pop star but also a question of whether his chosen theorists were sufficient.

In his dissertation, Allred has set out to prove a point about analyzing Beyoncé outside of the traditional lens of academia. He links the theories of bell hooks with Beyoncé’s storytelling in Partition and Jealous, focusing on the hypersexualization of black bodies in private and public. He ties Melissa Harris-Perry’s Sister Citizen theory of the crooked room to the way Beyoncé combats structural constraints from her position of fame and relative privilege.

“They basically asked me where all the white men were,” Allred said of the approval committee. “It was, ‘Where’s Foucault? Where’s Deleuze?’ ”

They basically asked me where all the white men were. It was, ‘Where’s Foucault? Where’s Deleuze?’

The struggle around legitimizing the study of black feminism is not specific to Rutgers, Allred or Beyoncé. While Beyoncé is taught at other colleges – the University of Waterloo and University of Victoria both have courses around her work – she is typically studied as a performer or musician. The itchiness around Politicizing Beyoncé seems to come specifically from attaching her to black feminism, a realm of study that is in danger of being dismissed even when it is not attached to a controversial pop star.Evelyn Simian, a professor at the University of Connecticut’s department of political science and institute for Africana studies, is all too aware of the issues attached to black feminism in the academic landscape.

“You often need to speak their language. It’s called code-switching,” she said. “If you’re going to introduce a marginalized topic or something that’s considered ‘easy’, how do you then make it more rigorous to that very audience that you’re receiving pushback from? Sometimes, you have to learn to use the master’s tools.”

“Some of this certainly has to do as well with a general social ire toward Beyoncé,” said Brittany Cooper, a black feminist theorist in the women’s and gender studies department at Rutgers. She noted that Politicizing Beyoncé is probably the only course at the school with a named black woman in the title, despite the fact that it’s standard practice to have an entire directory of classes titled after white men.

“Disdain feels appropriate to [detractors], because they’re like, ‘Oh, it’s just because we don’t like Beyoncé and don’t think she’s serious,’ ” Cooper continued. “But it turns out that, structurally, we don’t take very many black women seriously in university curriculum. Period.”

As for the future of the course, Masur and Allred met earlier this week to talk about moving it to the American studies schedule. In fall of 2016, Politicizing Beyoncé will be resuscitated in Masur’s department, among the likes of Masur’s Springsteen course, History and Culture of Hip Hop or the class just called Spike Lee.