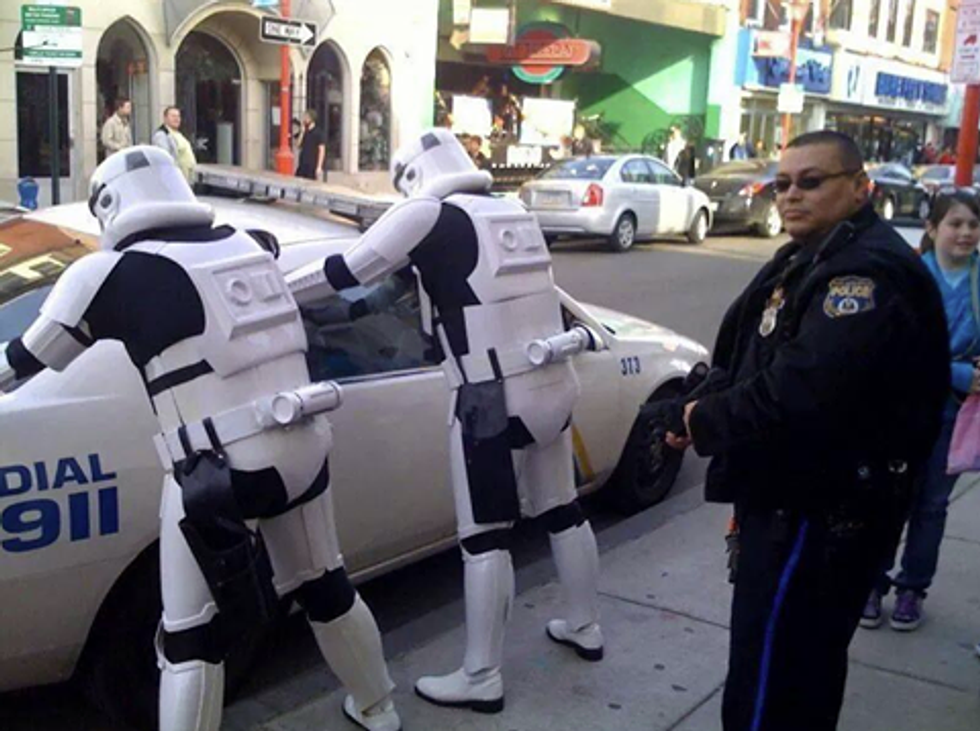 If you should accidentally discover, before you’ve even had the chance to view Star Wars: The Force Awakens for yourself, that Maz Kanata is Luke Skywalker’s twin, or that Chewbacca is BB-8’s uncle, you might well think the perpetrator of said spoiler ought to be locked up. According to police in Philadelphia, a change in the law is indeed well overdue: officers have taken to an official Twitter feed to declare that leaking Star Wars secrets ought to be illegal.

The Philadelphia Police Department’s post, in which it reluctantly admitted that posting spoilers was not a criminal offence, has now been retweeted more than 9,000 times. Officers from the (ahem) force later joined in the fun by posing for photographs with fans dressed as stormtroopers, who they appeared to be arresting.

Meanwhile, Reddit users who post spoilers risk finding themselves being handed the online equivalent of jail time, according to reports . Administrators on the popular bulletin site have already started to ban anyone who posts vital plot information about the Star Wars: The Force Awakens, which opens in the US at 12.01 tonight.

“We’ve banned dozens of users so far for this,” said TheGreatZiegfeld, one of Reddit’s moderators, in an online post. “I think all the mods have had it spoiled for them by now. We’ll do our best to make sure you guys don’t suffer the same fate.”

The move follows threats by a group of rogue Star Wars fans to spoil The Force Awakens on social media unless studio Disney agrees to film the saga’s abandoned “expanded universe” stories. Members of the Alliance to Preserve the Expanded Universe have been caught making threats to reveal The Force Awakens’ deepest secrets via social media in a process dubbed “spoiler jihad” in online circles.