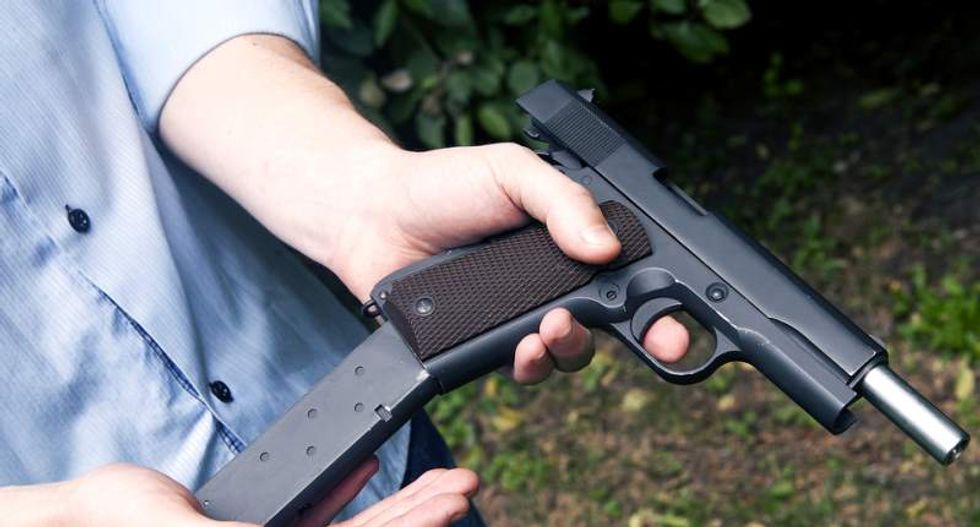 A man with a gun (Shutterstock)

Even before the facts of the San Bernardino mass shooting are in, a familiar argument is dividing Americans along political, religious and racial lines: was this terrorism? The right-wing news site Breitbart.com wasted little time describing Syed Farook and Tashfeen Malik as the “ jihadis next door ”, even before initial reports emerged that the couple may have visited radical Islamist websites and had unspecified forms of contact with people being investigated for links to extremist groups. Other outlets preferred to focus on the fact that Farook worked for the county public health department whose holiday party was targeted without immediately assuming his religion or political beliefs had anything to do with it.

Across social media sites, people asked if the “t-word” would have been invoked so quickly if the couple were white Christians instead of brown-skinned Muslims. Some saw a double standard between the way events in San Bernardino have been characterized and last weekend’s murders at Planned Parenthood in Colorado Springs , whose alleged perpetrator was notoriously described in the New York Times as a “ gentle loner ”, not a terrorist, despite the apparent political motivation behind his attack.

“It’s obvious,” Ibrahim Hooper of the Council on American Islamic Relations (Cair) told the Guardian. “If it’s a mass shooting with no Muslim angle, it’s treated one way … If a Muslim is involved, religion trumps all. Everything will be related to his or her faith.” Fox News, however, seemed to find it equally obvious that Farook and Malik were “jihadists armed to the teeth and hellbent on slaughtering innocent Americans”, as it wrote on Thursday morning.

Other commentators, whether or not they sympathized with Fox’s world view, felt that the level of violence qualified as terrorism, whatever the motivation for it. Marc Cooper, a former professor of justice and journalism at the University of Southern California, thought the media was obtuse even to pose the question. “When two people don flak jackets and masks,” he said, “and calmly walk into a gathering of innocents and slaughter 14 people while wounding an equal number with AR-15s, you have to ask?”

The argument quickly spilled over into the political arena on Thursday, after President Obama – following the Federal Bureau of Investigation’s lead – said it was too soon to say whether the San Bernardino shootings had a political motivation and thus whether they could be said to be an act of terrorism. The Texas senator and Republican presidential candidate Ted Cruz wasted little time taking issue with that cautious approach, telling a Republican Jewish Coalition meeting the attacks were “another manifestation of terrorism – radical Islamic terrorism here at home” akin to last month’s Isis attacks on Paris and said the country needed a “wartime president”.

Part of the confusion stems from the fact that terrorism is notoriously difficult to define, and many experts doubt whether it can in fact be defined at all without dragging along a lot of cultural and ideological baggage. A famous 2003 paper for the US Army War College said the term was “mired in a semantic swamp” and had been defined more than a hundred different ways by government agencies over the years. Sometimes the definition emphasized political motivation or the targeting of noncombatants, and sometimes it barely distinguished terrorism from “war, coercive diplomacy, and barroom brawls”.

In the United States, the term’s modern usage stemmed from a desire, during the Cold War, to describe attacks on US targets by foreign militant groups. But it ran into trouble almost immediately because definitions alluding to the political uses of violence could easily be attached to some of the actions of the United States itself. Thus the State Department and the national security establishment began to define terrorism – especially after 9/11 – as attacks perpetrated by “sub-national” or “sub-state” actors. That eliminated the entire category of state-sponsored terrorism, even though successive US administrations have been deeply concerned about that phenomenon.

Likewise, the insistence on restricting the definition to civilian victims inadvertently eliminated events like the 2000 al-Qaida attack on the USS Cole in Yemen, which the US government described as terrorism even though the victims were active servicemen. The FBI has relied for several years on a definition designed to create a standard for prosecuting terrorism cases in court. It says terrorism is “the unlawful use of force or violence against persons or property to intimidate or coerce a government, the civilian population, or any segment thereof, in furtherance of political or social objectives”.

The rash of mass-casualty shootings in recent years poses several challenges to that definition, not least the fact that many of the perpetrators might visit radical websites or immerse themselves in an extremist ideology without furthering any objective other their own and others’ destruction. Is that terrorism or not? Often, the answer seems to be analogous to the supreme court justice Potter Stewart’s famous definition of pornography : “I know it when I see it.”

Curiously, since the 2012 movie theatre shooting in Aurora , Colorado and the elementary school shooting in Newtown , Connecticut, a few months later, the FBI has been quietly moving away from prioritizing motives as expressed by the assailants and focusing more on developing a model for predicting and identifying personality types with a propensity to carry out mass killings – for any reason. In other words, while politicians and much of the country bicker over semantics and ideology, those with the greatest responsibility for responding to the threat of mass shootings are progressively less interested in the terrorism question and more interested in studying patterns of mental health issues – as manifested in antisocial behavior, dysfunctional family backgrounds, feelings of failure and so on.

“These things don’t necessarily fit into neat legal definitions,” John Cohen, the former head of counterterrorism at the Department of Homeland Security, told the Guardian. “If we’re going to be successful in preventing future attacks, we need to move beyond motive and look at the common characteristics of these attackers.”

James Comey, the FBI director, and his key aides, including deputy director Mark Giuliano and Andrew McCabe, until recently executive assistant director for national security, have all embraced this new approach. How the rest of the country debates the terrorism question still has important implications, however, with American Muslims feeling much of the immediate brunt of the rush to lump brown-skinned perpetrators with al-Qaida, Isis and other enemies of the United States.

“Islam and Muslims have become metaphors for terrorism and barbarity,” Hamid Dabashi, a professor of Iranian literature at Columbia University, complained after last summer’s shootings at a black church in Charleston, South Carolina. “Today, even the most ‘progressive’ Westerners use terms such as ‘jihad’, ‘jihadist’, or ‘fatwa’, when they want to refer to their own (Christian or Jewish) fanatics, as if no other term in English or other European languages can be found to label their own instances of terrorism.”

Even among Muslims, however, there is little agreement about the use of the word terrorism. Many Muslim Americans do not shy away from the word; they just want it applied across the board. “If someone is attacking civilians based on political or religious ideology, I view that as terrorism,” Ibrahim Hooper of Cair said. “We view all of those cases as terrorism. The problem is that the rest of society doesn’t view them with one standard.”