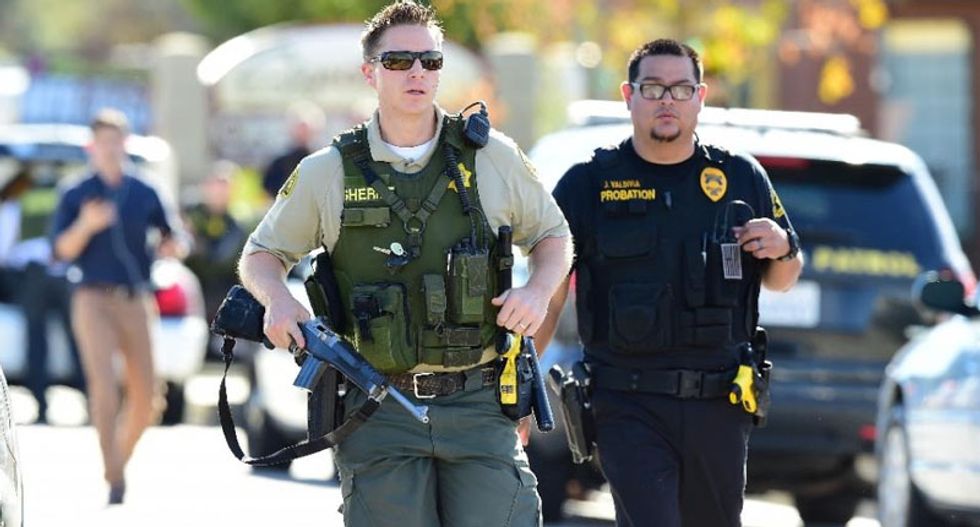 Police patrol the scene of a mass shooting on December 2, 2015 in San Bernardino, California, where one or more gunmen opened fire inside a building, leaving at least 14 dead (AFP Photo/Frederic J. Brown)

One of the two people accused of killing 14 at a holiday party in California apparently pledged allegiance to a leader of Islamic State militant group, two U.S. government sources said on Friday.

Tashfeen Malik, 27, and her husband, Syed Rizwan Farook, 28, were killed in a shootout with police hours after the Wednesday massacre at the Inland Regional Center social services agency in San Bernardino, about 60 miles (100 km) east of Los Angeles. The attack was the deadliest mass shooting the United States has experienced in three years.

U.S. investigators are evaluating evidence that Malik, a Pakistani native who had been living in Saudi Arabia when she married Farook, had pledged allegiance to Islamic State leader Abu Bakr al-Baghdadi, two U.S. officials told Reuters. They said the finding, if confirmed, could be a "game changer" in the investigation.

CNN reported on Friday that one U.S. official said Malik had pledged allegiance to al-Baghdadi in a posting on Facebook made on Wednesday, the day of the attack, under an account that used a different name.

The investigation has been focused on the motivation for the attack with officials including President Barack Obama and San Bernardino Police Chief Jarrod Burguan saying it may have been motivated by extremist ideology.

Islamic State claimed responsibility for the Nov. 13 coordinated shooting and bombing attacks in Paris that killed 130 people and injured hundreds. The group has called on its supporters around the world to strike targets in the West.

Malik and Farook left behind a 6-month-old daughter. Farook's brother-in-law, Farhan Khan, told NBC News he had begun legal proceedings to adopt the girl and was "very upset and angry" at Farook.

"You left your 6-month-old daughter," Khan said. "In this life some people cannot have kids. God gave you a gift of a daughter. And you left that kid behind ... What did you achieve?"

Twenty-one people were wounded in the attack, the worst gun violence in the nation since the December 2012 shooting at Sandy Hook Elementary School in Newtown, Connecticut.

Farook, a U.S. citizen born in Illinois, was the son of Pakistani immigrants, said Hussam Ayloush, head of the Los Angeles area chapter of the Muslim advocacy group Council on American-Islamic Relations.

Christian Nwadike, who worked with Farook for five years, told CBS that his co-worker had been different since he returned from Saudi Arabia.

"I think he married a terrorist," Nwadike said.

Investigators are reviewing the couples' computers and cellphones to see if they had browsed jihadist websites or had contact with militant groups, according to officials in Washington familiar with the investigation.

Police said the couple had two assault-style rifles, two semi-automatic handguns and 1,600 rounds of ammunition in their vehicle, with 12 pipe bombs found in their home.

(Reporting by Yasmeen Abutaleb and Lisa Baertlein; Additional reporting by Mark Hosenball and Doina Chiacu in Washington and Suzannah Gonzales in Chicago; Writing by Scott Malone; Editing by Bill Trott)