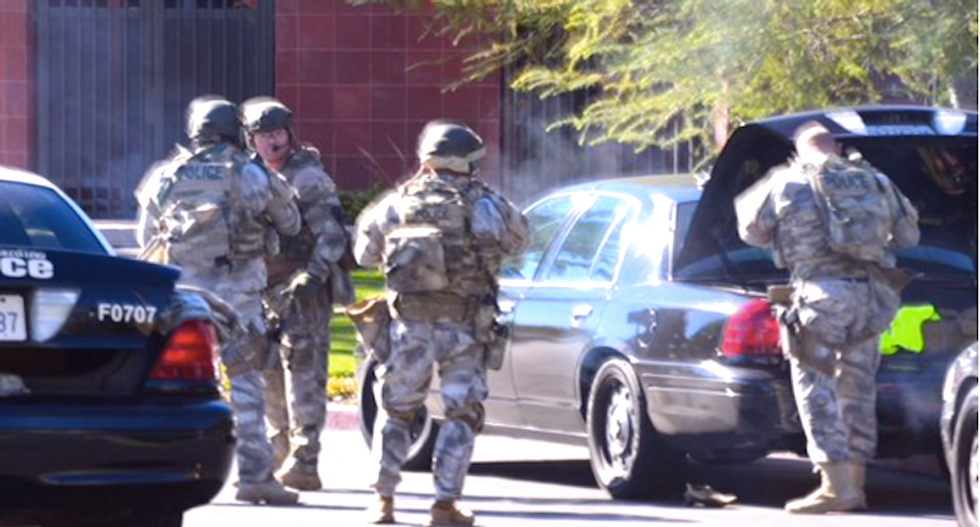 When is it okay for public officials and the news media to withhold information from the public? Although “never” might seem like the right response, perhaps the correct answer is “When it saves lives.”

On Wednesday at 11 am a mass shooting erupted in a convention building at the Inland Regional Center in San Bernardino, California. After killing 14 people and injuring 17, a county employee and his wife took police on a car chase before dying in a street shootout. The situation was over within hours, and soon after San Bernardino Police Chief Jarrod Burguan gave reporters what seemed to be an intentionally vague description of the shooters. Although the suspects were said to have been armed with assault-style guns and tactical gear, no other physical description was given. However, for many these details alone spelled out a well-planned terrorist attack.

For the next 24 hours, news pundits on CNN very clearly and repeatedly reported that the motive of the shooters remained a complete mystery, with statements like “The motive is still far from clear,” on constant rotation. This point was further reiterated by various guests they had on, like a law enforcement analyst, an FBI spokesman, and over and over again, Police Chief Burguan. However, by that time the shooters had been officially identified as being 28-year-old Syed Farook and his girlfriend or wife, Tashfeen Malik.

Upon hearing the Middle Eastern names (my real name is the same as the shooter, albeit with a slightly different spelling), I immediately wondered whether this was an ISIS-inspired attack, but quickly assumed that if the police, FBI, or media had any information to support this, they would have of course made it known. As such, my instinct was to assume that the shooters must have been carrying out the agenda of some ultra-right wing militia group, in light of the shooting that occurred at the Planned Parenthood clinic in Colorado just days before. But what I heard in subsequent hours from the police, FBI agents, analysts, and pundits on CNN confused me further.

The news continued to focus on the possibility that the shooting was a result of a dispute that occurred at a holiday office party where the shooter was employed. Chief Burguan further explained how Farook was an environmental specialist in the public health department, who was said to have left the party after becoming very angry due to some exchange.

Huh? Wait a minute; didn’t they already say that there were at least two shooters with military-style guns and gear? Does that sound like the work of a disgruntled employee, or an impulsive crime of passion? Surely not.

I remained glued to the screen as I listened to the Executive Director of CAIR (the Council on American-Islamic Relations), who apparently felt the need to speak out about the incident on behalf of the Muslim community before any motive had been publicly stated. After re-emphasizing the fact that the motive remained unknown, and mentioning mental illness or a work dispute being potential causes, he expressed deep sentiments on behalf of the American Muslim community. When asked by CNN why he chose to come forward, he explained that he was concerned about Islamophobia, and thought it was important that the attack be condemned as quickly as possible. Additionally, while also standing in front of the CAIR backdrop the male shooter’s brother-in-law spoke. “Why would he do that? I have no idea, I am in shock myself.”

By that time, I began to suspect that everything being said by officials and reporters—all the information they were providing to the public—was very carefully constructed and delivered in a way that would not implicate ISIS or some other Islamic extremist group. My curiosity encouraged me to test this hunch.

A quick Google search turned up a New York Daily News article that told a quite different story from the narrative being put forward by CNN and officials. In it, the father of the shooter, Syed Farook (senior) told the Daily News, “He was very religious. He would go to work, come back, go to pray, come back. He’s a Muslim.” Additionally, a female neighbor of Farook said, “Maybe two years ago he became more religious. He grew a beard and started to wear religious clothing. The long shirt that’s like a dress and the cap on his head”.

Then, after some more digging I quickly found a second article, this time on the CNN website, that stated that Meredith Davis with the Bureau of Alcohol, Tobacco and Firearms and Explosives told a CNN affiliate, “A device that looked like a bomb also flew out of a vehicle.”

Seriously? If CNN knew these types of details, which they obviously did, why would the pundits continue to spend so much time discussing the possibility that this could simply have been the result of a work dispute at a holiday party? Could anything be more ridiculous? For a moment I even felt somewhat insulted. Do they think I am a complete fool? Do they think we are all complete fools?

Then I thought to myself and realized that, in fact, I would have advised doing the exact same thing. CNN and police officials aren’t trying to fool people. They are trying to protect them.

In recent weeks we’ve seen bigoted protesters with assault rifles surrounding mosques in states like Florida. It is no secret that tensions between Muslims and Americans—specifically those in southern states that tend to have more conservative views—are at an all time high. It is not hard to imagine how violently such people might react to being suddenly told that the U.S. was under attack from ISIS. How many innocent American-Muslims’ lives would instantly be put in jeopardy? How many hate crimes would occur as a direct result of this type of alert?

Although I understand and agree with the reasoning behind why news outlets like CNN and MSNBC, as well as the police and intelligence officials handling the situation, continue to stall or subtly mislead the public regarding the real motivations of the shooters, I still can’t help feel like there is something potentially dangerous about this strategy. Considering what just happened in Paris, isn’t it logical and necessary to immediately ask the question, “Could this be ISIS?”

Perhaps in some cases, such as this one, it is okay to distort the truth—or at least delay it. But by pretending to not know who the enemy is in order to protect some, we also run the risk of being caught completely off guard by extremists who seek to destroy our lives. In the days to come, we will learn much more about the motives of the shooters, and we will also see how the public will respond. What is critically important is that we all stay calm and collected, and take to heart the message put forth by the director of the California chapter of the Council on American-Islamic Relations: “The Muslim community stands shoulder to shoulder with our fellow Americans in repudiating any twisted mindset that would claim to justify such sickening acts of violence.”