Last October, every racist's favorite hero George Zimmerman retweeted a guy who applauded him for shooting Trayvon Martin, along with a photo of the unarmed boy's  dead body. While Zimmerman continued to gloat about the fact that he murdered Martin after profiling and following him in a gated community, calls to #BanGeorgeZimmerman began to gain some traction.

Unfortunately, that didn't seem to matter much to the fine people over at Twitter, because not only did they refuse to do anything about the rotund wannabe neighborhood watchman, they didn't even provide an explanation for their inaction. I thought Twitter had a comprehensive abuse policy.

Finally, there has been a minuscule piece of justice now that Zimmerman went even further to prove that he's nothing more than a low-life piece of scum. Twitter has suspended Zimmerman's account due to two extremely abusive tweets aimed at a woman. The tweets were geared toward a white woman who he was allegedly dating....and I say allegedly because it's hard to believe anyone would find a boastful killer, alleged domestic abuser, and MMA failure attractive.

The two tweets in question featured nude photos of the woman, with one caption that read "She cheated on me with a dirty Muslim." He then shared her phone number and followed it with a classy "She'll sleep with anyone." 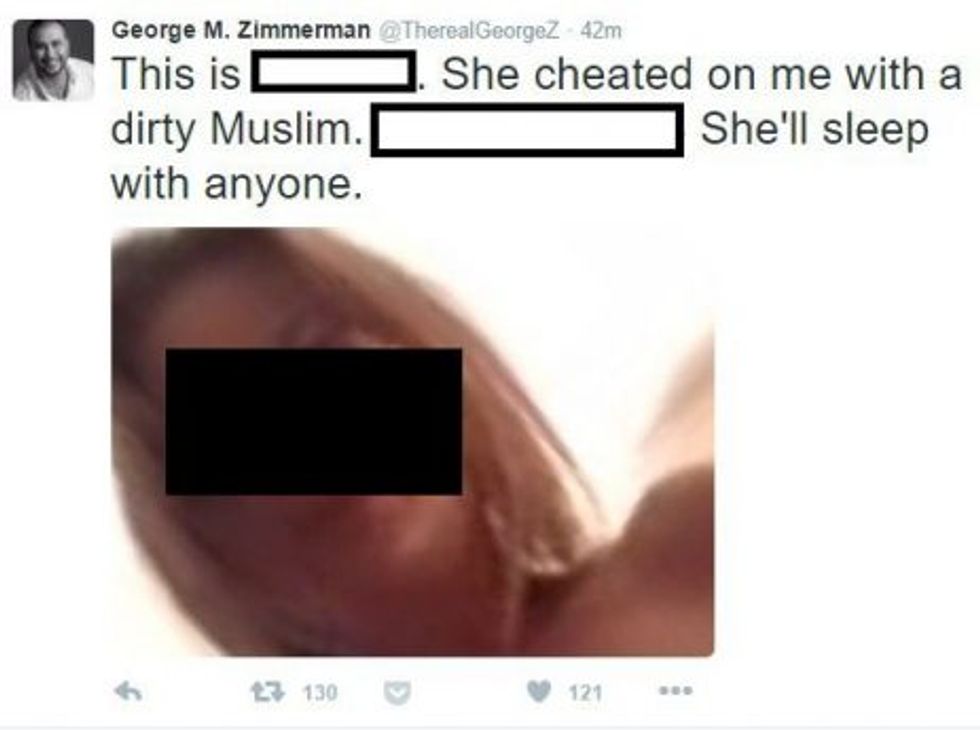 The second tweet accused the woman of stealing from him, and included her email address.

While I'm elated that Twitter finally suspended Zimmerman's account, I wish the action was taken months ago when he decided to brag about killing someone. Zimmerman has been emboldened by the number of times he's gotten away with criminal behavior, including several instances of domestic violence. When we live in a society that rewards bad behavior, we can't be surprised when people behave badly.