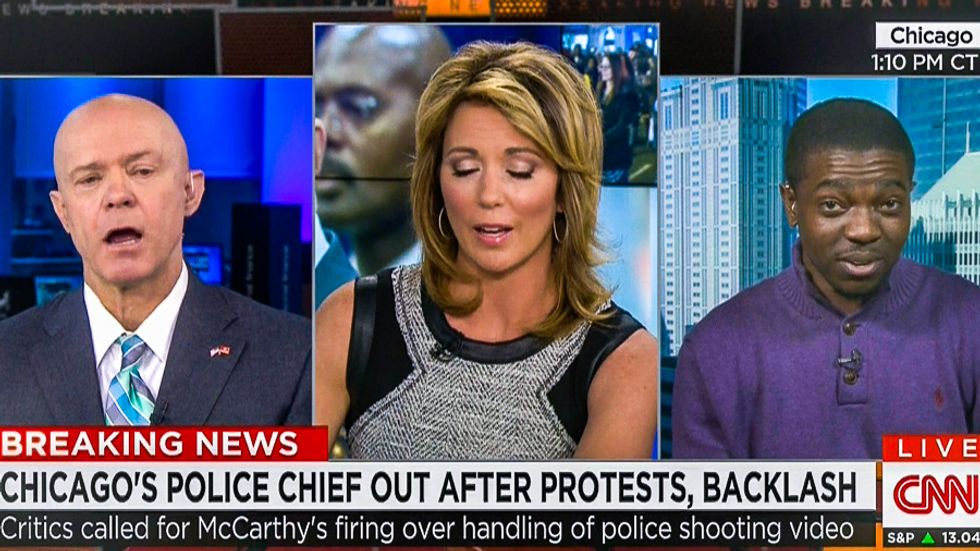 CNN anchor Brooke Baldwin called out the network's law enforcement analyst, Harry Houck, on Tuesday for referring to a black activist from Chicago as "you people."

Houck took the side of the outgoing police chief, saying that Emanuel should have been made to resign instead.

"This mayor should be impeached, he should resign," the former NYPD detective opined. "The National Guard should go into Chicago, take that city back from the thugs."

Green explained that activists had called on the Justice Department to do a "top-down investigation over the overall patterns and practices of the Chicago Police Department."

"This isn't new," he pointed out. "When you have a police department that has its own domestic Guantanamo Bay [Detention Center], when you have neglect on the South Side of Chicago, when you have cases that go unheard as it relates to young black children and queer and transgender voices, we have a problem in the city of Chicago."

Houck charged that Green was refusing to call for Emanuel's resignation because both men were Democrats.

"Aren't you tired of dead black children on the streets of Chicago?" Houck exclaimed at Green. "Not from cops, but from thugs shooting at each other?"

"The only way to take back the inner city of Chicago is for police to go in there with aggressive police work," Houck argued. "You've got to be able to point the fingers at the bad guys."

Green, however, observed that Chicago's "system" of oppression had "gone on for generations."

"Maybe," Houck shrugged. "I'm just tired of the police getting the brunt of everything that's going on inside the inner city of Chicago."

"You people," the law enforcement analyst continued before he was interrupted by Baldwin.

"You people who live in Chicago," Houck shouted, "should start voting for maybe another person, maybe a Republican, instead and see how he -- a Republican -- can come in there and straighten that city out."

"We're asking for transformation and change in the city of Chicago and we're not silent," Green remarked. "Much to your dismay and much to your upset, we're not quiet."