WATCH: NYC woman takes a bite from her pizza and walks away as hit pedestrian dies bleeding on sidewalk 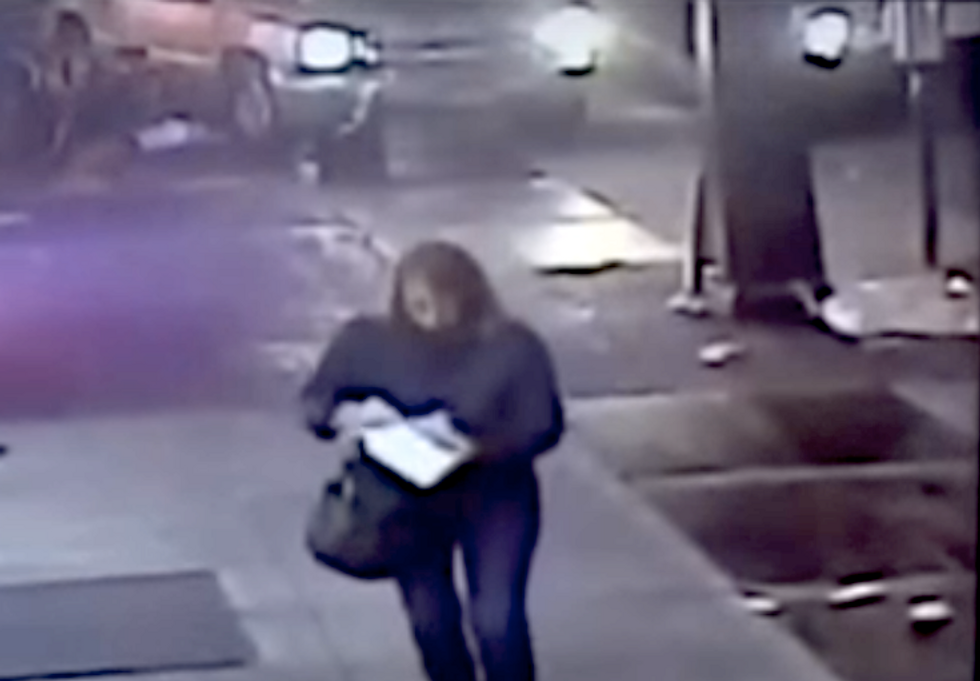 Image: An unidentified woman eats pizza at the scene of a fatal crash in Brooklyn on Sunday (Screen capture)

On Sunday, in the Ft. Greene area of Brooklyn, one woman was killed and four other people were injured when an SUV ran up on the sidewalk outside a pizza restaurant and plowed into a crowd of pedestrians.

Witnesses described a grisly scene in which Nicodemus' body was flung to the pavement, bleeding heavily. Bystanders attempted to perform chest compressions to save her life, but it was too late. The other victims -- including Nicodemus' boyfriend -- were hospitalized, but police said their injuries were not life-threatening.

“This place was a madhouse,” said Byron Logan, 72, to the Daily News. “I’ve never seen so many people screaming.”

One woman, however, appeared unperturbed by the scene of carnage unfolding feet away as she calmly turned around, took in the scene, took a bite of her slice of pizza and walked away, even as bystanders rushed to aid Nicodemus and the others.

Often in emergencies, bystanders fall victim to the so-called normalcy bias, a mental state in which people deny the severity or existence of oncoming danger or disaster. When confronted with danger, some people enter a state of "frozen calm" in which they feel they are viewing the events around them from a great distance and that what is happening is of very little significance or import.

So, while the woman's reaction may seem callous, it is important to bear in mind just how poorly the human mind reacts to unexpected stressful situations.

The SUV driver -- 39-year-old Marlon Sewell -- was arrested at the scene and charged with driving without a license or insurance.