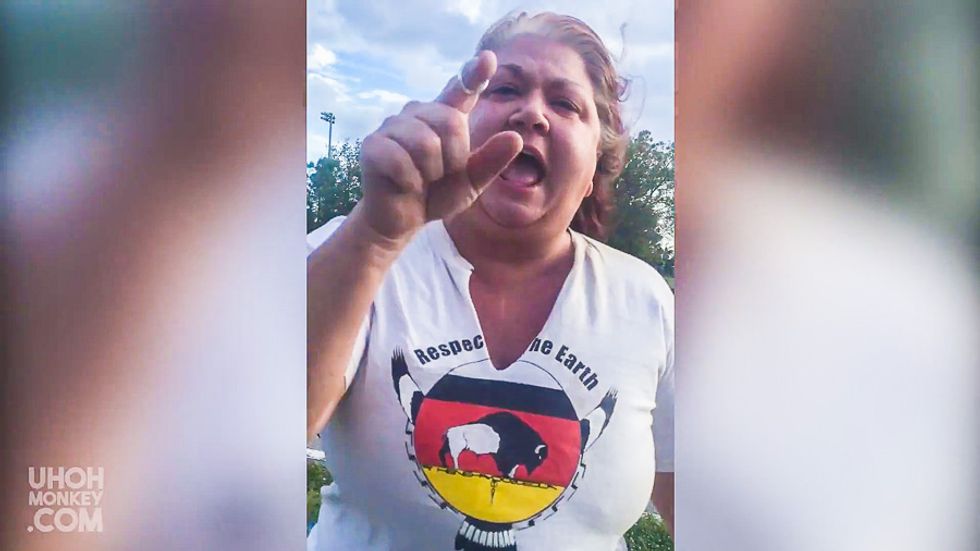 Two Brazilian men said they were filming a video for their YouTube comedy channel when an irate white woman pulled over because she mistook them for terrorists.

"I was filming a sketch for youtube in front of a local airport, when a racist woman stopped her vehicle on the side of the road and started calling my friend and I terrorists," performer Uhoh Nick wrote on Facebook. "Being that I'm an inspiring filmmaker, I pulled out my camera and started recording the incident. I honestly never thought this would happen to me."

In the video, the woman immediately begins hurling racial insults as soon as one of the men pulls out his cell phone to begin filming.

"I said you were a scum bag, you're child pedophilers [SIC], faggot bitches that turn into terrorists," she rants, adding several other anti-gay slurs. "You're turning terrorists now because you hate yourself so much. Now you're taking pictures in front a plane to remind you of 9/11."

"You're American terrorists!" the woman insists after exiting her SUV. "And God told me so. God is your brain and your brain."

Peppering her rant with homophobic slurs, the woman yells at the two men about Jesus, 9/11, hoverboards before insisting that the two Brazilian men "are Middle Eastern" and then getting back in her vehicle.

"You want little Middle Eastern boys like you to get raped and go to hell!" she yells as she drives away.

Uhoh Nick lamented on his personal Facebook page that people "like her need to be shunned out of society, because that's the mentality that keeps us from progressing."

Raw Story requested clarification from Uhoh Monkey about whether this encounter was part of a comedy routine, but the performers did not respond by the time of publication.