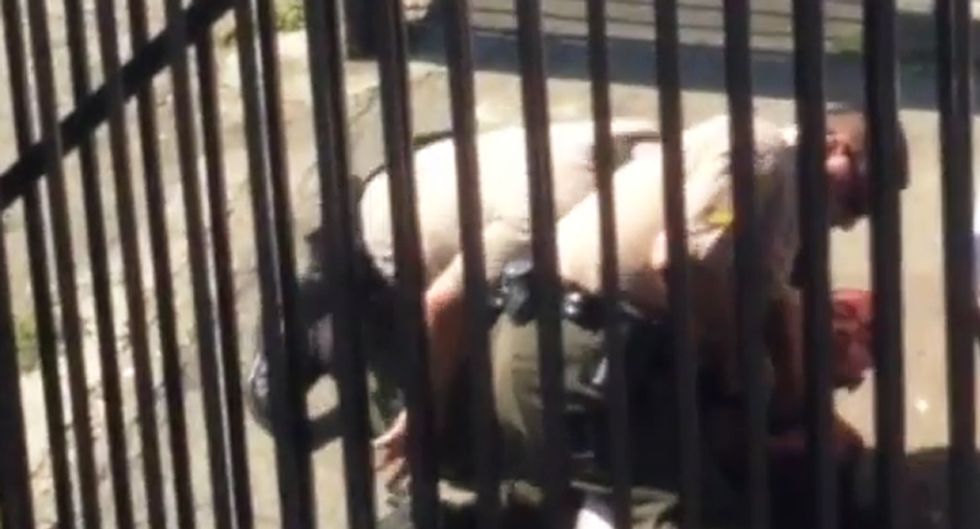 Long Beach, CS – Last year, two Los Angeles County Sheriff Deputies stopped a man for wearing headphones while biking, and when he attempted to continue on his way, he was thrown to the ground and then shot and killed. Police quickly made a cover story and accused the victim, Noel Aguilar, of pulling a gun on the officers, and until now there has been no evidence to prove them wrong. However, video of the incident has recently surfaced showing how the murder actually took place.

Aguilar attempted to avoid the police harassment by running away, but they eventually caught up with him and slammed him into the ground. In the video, the victim can be seen on the ground with two police officers piled on top of him. Police began to accuse Aguilar of having a gun, but they quickly knock it away. The gun can be seen very clearly behind one of the officers and nowhere near Aguilar. However, one of the officers continued to make threats and acted like the gun has not been recovered.

“Is it a gun?” deputy Albert Murade asks his partner Jose Ruiz. “It’s a gun, it’s a gun,” Ruiz responds. “You fucking move, I’m going to kill you bitch,” Ruiz shouted. Around that same time, Aguilar can be heard in the video saying “I don’t have anything.” Just a moment later, Aguilar attempted to get up and break free from the officers, at which point deputy Ruiz fires blindly and shoots deputy Murade in the stomach by accident.

Murade yells out that he had been shot, and Aguilar quickly responded saying “I didn’t shoot nobody.” Ruiz had plenty of time and ability to tell his partner that he was the one to fire the shot, but he said absolutely nothing and shot Aquilar again. Murade then shoots Aquilar three more times, and then both officers proceed to put their full body weight on him, seemingly to suffocate him, let him bleed out and “finish him off.”

Angel Carrazco, an attorney representing Aguilar’s says that the video proves that the officers are guilty of murder.

“The first shot is not justified because the victim is very vulnerable, he’s on his side. The other three shots from the back, every single one of those is unjustified. For me, it seems like it’s murder,” Carrazco told OC Weekly.

“We got the video through an independent witness that was there. This is evidence that we’ve had in the last twenty days,” he added.

Immediately after the incident happened, the media reported it as if Aguilar had shot the officer, because that is what the officers said in their initial statement, however, further investigation proved that they were lying. Also, police claimed that Aguilar reached for their guns, but the video proved that this was a lie as well.

Carrazco explained even after the shooting, the officers did not attempt to revive him in any way, but instead it looked as if they were trying to make his condition worse.

“He’s facing down after being shot four times and they’re on top of him. There needs to be a medical conclusion to find out whether they were trying to get him to asphyxiate or bleed to death. By the video, it seems like they were trying to do both,” Carrazco explained.

Many people would argue that because he was attempting to resist that he somehow deserved the treatment he was given. However, the police had no right to stop him to begin with, and it is a natural human reflex to attempt to move around when a large man is on top of you putting you in incredibly uncomfortable positions.

This video clearly shows that the man was murdered and that many of the officer’s initial statements were blatant lies. Police should not have the right to stop and harass people if they aren’t hurting anyone, and they shouldn’t have the right to use whatever kind of force they want on people who don’t react with immediate obedience.

Watch the video below from the OC Weekly: