Water on Mars and landing on comets: 2015 was a good year in space exploration 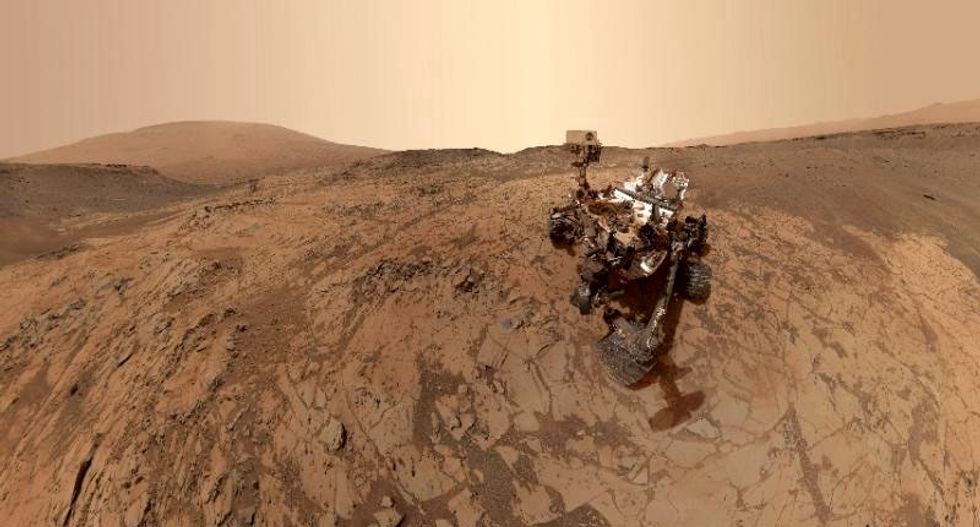 When the Soyuz rocket carrying Britain’s Tim Peake blasted off from Baikonur cosmodrome in Kazakhstan this month, he took much of the nation with him . He is not the first British astronaut and not even the first from Sussex , but he is the only one ever admitted to the European astronaut corps . That makes a difference. As a career astronaut for the European Space Agency, Peake is uniquely placed to inspire British children for many years to come. The launch was a historic moment, but far from the only highlight of 2015.

It was already an exceptional year in space. The face of Pluto emerged from the gloom to reveal a dazzling landscape of ridges, ice mountains and plains of solid nitrogen hundreds of miles wide. Robots on the ground and in the sky above Mars found ancient water marks and then evidence that water flows there today, leaving dark streaks on the walls of craters and gullies. Another probe plunged through frigid geysers that spray from Enceladus, one of Saturn’s moons : the vapour propelled by hydrothermal energy in a global ocean under the surface.

For one group of British scientists 2015 began with a bittersweet discovery. Images from Nasa’s Mars Reconnaissance Orbiter revealed the fate of the Beagle 2 spacecraft. Not seen since Christmas 2003 when it parted from the European orbiter, Mars Express, the pictures showed the unmistakable Mickey Mouse-shaped remains of the little lander. Partially opened, its outer cover apparently nearby, the images showed how close the budget mission had come to success. “I had given up on ever knowing what happened to Beagle. After so many years you think you’ll never know,” said Mark Sims , the project’s mission manager at Leicester University. “It had obviously gone through its whole landing sequence and had started to deploy itself. When I first saw the images, I thought ‘My God, it might actually have made it’.”

It was not the last we heard from Mars. In March, Nasa drew on the world’s most powerful telescopes to show that the red planet once hosted a vast, ancient ocean that covered nearly half of the northern hemisphere. That Mars had once been warm and damp was nothing new, but the amount of water was a revelation. The scientists envision the north of Mars under around 20 million cubic kilometres of water, more than is found in the Arctic ocean. The huge body of water stood for millions of years but as the atmosphere thinned the ocean was lost to space. What remains, a mere 13% of the water, is locked up in the planet’s polar ice caps.

More breathtaking, though, was the finding in September that there is liquid water on Mars today. The Mars Reconnaissance Orbiter, the same probe that found Beagle 2, had swung around the planet taking pictures of strange dark streaks that appeared on crater walls and canyons during the planet’s summer months. Infrared analyses of the images found the hallmarks of hydrated salts on the surface, but only when the streaks were present. It looked a sure sign that liquid water was either condensing on the surface, or rising up from the briny reservoirs in the ground.

Water is regarded as a prerequisite for life, or at least for life on Earth. The discovery that water flows on Mars means the planet may, in some parts, harbour niches where microbes evolved and exist even now. That would be in line with the discovery of methane plumes on Mars last year, though chemical reactions on rocks can release the same gas.

The prospect is tantalising but the practicalities are frustrating. To find life elsewhere would answer one of the greatest questions of human existence. But there is a glitch. Planetary protection guidelines say that robotic landers must not spread Earthly microbes to sites where life might exist on other planets. Nasa’s Curiosity rover was not sterilised before launch and so is not clean enough to venture on to Mars’s damp patches. Nor is its twin, a rover planned for launch in 2020. It is a quandary that scientists may work around though. Trundle about on Mars for long enough and the radiation may kill off any microbes that hitched a ride. Expect more in 2016.

“It looks more and more like Mars was a very habitable world three to four billion years ago,” said Monica Grady , professor of planetary science at the Open University. “What we don’t really know is: did life develop there? If you asked me 20 years ago I’d have bet heavily against the possibility of life. But nowadays we know Mars was a pretty habitable place. The question is: did it start and did it go anywhere?”

Between Mars and Jupiter, a spacecraft named Dawn became the first to visit a dwarf planet. At 300 miles wide, Ceres is the largest object in the asteroid belt. As Dawn approached, two mysterious shiny spots became clear on the surface. The nature of the bright patches sparked a debate among astronomers, with the latest spectral images from the spacecraft suggesting they are not ice, as some suspected, but salts .

The European Space Agency’s Rosetta spacecraft, the first to drop a lander on a comet, continued to orbit the body, sniffing oxygen in its gas cloud and flying close enough to film its own shadow on the comet’s surface. The Philae lander which landed not once, but thrice, fell silent three days after touchdown. But as the comet neared the sun and more light fell on its solar panels, Philae stirred to life again , long enough to call Rosetta. The moment was the highlight of the year for Grady, who works on the Ptolemy instrument onboard. “It powered up and it could still happen again,” she said. For now, the comet is too active for Rosetta to fly close enough to make contact.

Meanwhile, on the sixth moon of Saturn, Nasa’s veteran Cassini probe went looking for signs of life . The spacecraft dived down to Enceladus and passed through geysers that erupt from a saline ocean under the surface . Scientists are still analysing the chemicals detected in the plume. If they turn out to include hydrogen gas, researchers would have good evidence for hot vents at the bottom of the moon’s ocean and good reason to consider Enceladus the most promising place to find life beyond Earth.

Orbiters and rovers have peered and poked at Mars for a long time. But other corners of the solar system had gone unexplored until this year. As John Bridges , a planetary scientist at Leicester University, puts it: “2015 was the year of the outer solar system.” It was an important year for images too. For 85 years, the best pictures we had of Pluto showed no more than a blurred blob. In July, the US space agency’s New Horizons probe changed all that . Barrelling past the dwarf planet on the edge of the solar system, the spacecraft captured Pluto in all its staggering beauty .

“It’s opening up our view of the outer solar system,” Bridges said. “We have this idea of the outer solar system being this cold, inert place of dust and ice. But the key thing now, when we get a close-up view, is that there’s geological activity going on out there.” Inactive planets and moons are pocked with ancient impacts but active ones look different: the ground is turned over and refreshed. The Pluto images showed clear signs of activity in the form of giant regions of smooth, young terrain. “These are halcyon days for planetary science,” said Bridges. “There’s no question about that.”

The year produced, a fine demonstration of the fates of space hardware. In April Nasa crashed its Messenger probe into Mercury once it was done mapping the planet. A month later, the Russian cargo ship, Progress 59 , fell back to Earth after going wrong en route to the International Space Station. In the race to develop a reusable rocket, Elon Musk ’s SpaceX failed to land its Falcon 9 rocket on a barge at sea and then succeeded on land , while Jeff Bezos ’s Blue Origin company landed its New Shepard rocket at a West Texas launch site. He made sure the world knew, too.

With ever more powerful telescopes on the ground and in space, astronomers added to the haul of thousands of planets spotted beyond our own solar system. One is Kepler 438b, claimed by Kepler mission scientists to be the most Earth-like planet found to date. But the alien world, which lies 470 light years away, is not the most habitable. Intense blasts of radiation from the planet’s host star are thought to have stripped the atmosphere , leaving the planet Earth-sized but less than Earth-like.

The search for life beyond Earth took an extraordinary turn in October when an astronomer from Penn State University suggested that strange signals around a distant star might be the signature of a swarm of alien “megastructures” in orbit around the planet. In December the possibility, which was seriously speculative from the start, was dealt a blow. Scientists dedicated to the search for extraterrestrial intelligence (Seti) used an observatory in Panama to look for signs of life around the star and found none .

Those impatient for contact with alien life should not lose heart though. The world’s most comprehensive search for ET begins in earnest in January with backing from Yuri Milner, the Russian internet billionaire. Backing the launch earlier this year, Stephen Hawking said: “Mankind has a deep need to explore, to learn, to know. We also happen to be sociable creatures. It is important for us to know if we are alone in the dark.”