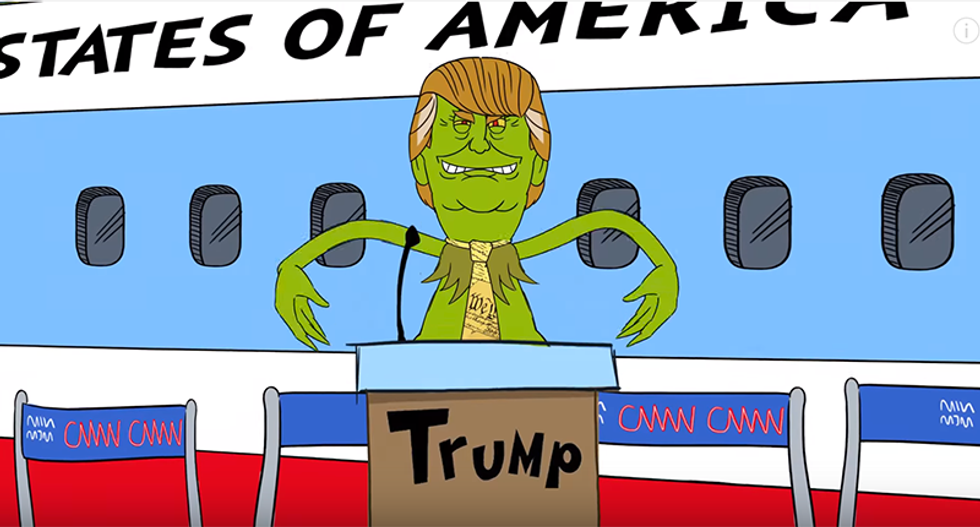 Screenshot from the video "You’re A Mean One, Mr. Trump" (College Humor)

CollegeHumor.com crushes it once again with this video that’s quickly going viral, calling Donald Trump “Mr. Grinch” and changing the words to the famous song from the Dr. Seuss classic.

The video walks through some of the most egregious things Trump has said over the course of his candidacy. Some of the best lines include:

"You're as racist as a klansmen dipped in dumb misguided zeal."

"You're a monster, Mr. Trump You say Muslims are uncontrolled. Claim they cheered on 9/11, now you want to ban them all... Donald Truuuuuump! I wouldn't touch you despite your 39 and a half percent lead in the polls!"

The video also features Trump’s comments from his announcement speech this past summer, where he said that Mexican immigrants are all rapists. “You say you want to build a wall and make Hispanics pay it all… Mr. Truuuump…”

About halfway through, the song abruptly stops as the lyrics present the choices between Trump and Carson. The singer is suddenly disgusted wondering if the two are really the only options. He asks if we're actually doing more harm than good by highlighting Trump's bad side since far too many in the right-wing seem to be so attracted to it.

Then there's Trump's sexism. As the Trump "Grinch" leans out of his frame on a faux Fox News screen there's a blond anchor that he hands a box of tampons. He mocked the disabled reporter, called Carly Fiorina ugly and insulted Senator John McCain.

An adorable bear in a suit as a debate moderator insults him in the most perfect way: "Your candidacy is an appalling dump heap overflowing with the most disgraceful assortment of deplorable rubbish imaginable and you probably disapprove of this song because it's about Christmas, but it's not religious enough. Even though YOU don't really care! Jesus f*cking Christ!"