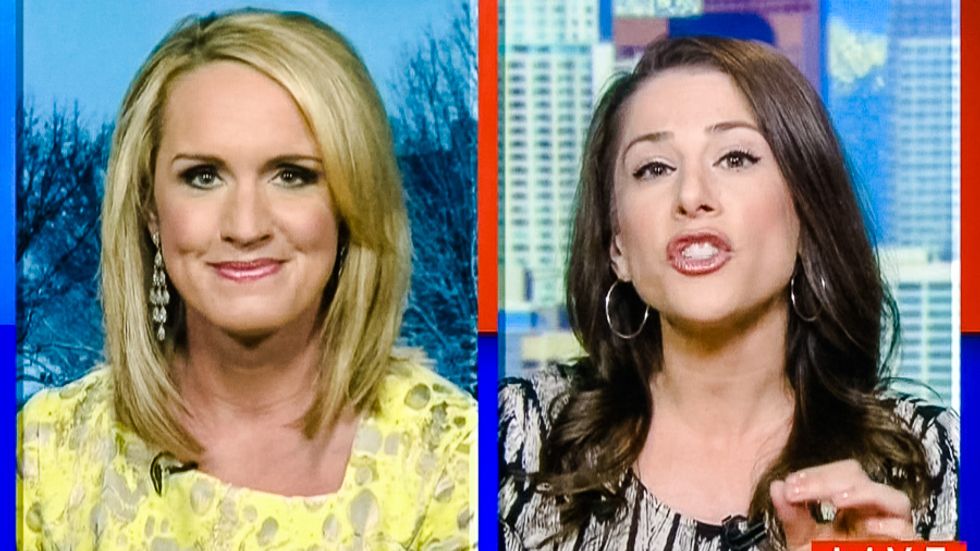 Ana Kasparian, host of The Young Turks, schooled conservative CNN guest Scottie Nell Hughes on Sunday for suggesting that Muslims were a bigger problem for Americans than income inequality.

Kasparian hinted that CNN was not blameless, observing that both the "establishment media" and politicians had been corrupted by the same forces.

"So it's really difficult for mainstream -- let's say, cable outlets -- to talk about things like income inequality, wealth inequality when the advertisers that are funding their shows are the same corporations that want to ensure that the same system continues," she explained.

Hughes disagreed: "When we have 94 million people out of the workforce, we see terrorism issues not only abroad but here at home, those are the stories that are leading our headlines."

"And so, a journalist has to have their head completely in the sand if they don't realize that that is what people are watching, and the ratings show that those types of headlines make it," the Tea Party pundit added.

Kasparian pointed out to Hughes that "a lot of the issues that matter to the electorate don't get covered at all."

"Student loan debt is one of them," Kasparian continued. "That is impacting our economy in one of the most negative ways imaginable, and we're sitting here having discussions about immigration and building walls."

"Immigration is below net zero," she noted. "We have more Mexican immigrants leaving the country right now than coming in. And instead of focusing on issues that actually matter to millennial voters, for instance, we're focusing on non-issues in the country, the fear mongering about Muslims and terrorism."

Hughes shot back that there was "more in this world than just millennials."

"When people are actually scared for their lives, that is the headline," Hughes opined. "I'm sorry, if there was a terrorist action in the United States and they led off with college debt, I would consider that media outlet to be a complete joke."

"You'd rather fearmonger about non-existent threats inside the United States," Kasparian replied, "as opposed to focusing on the issues that are burdening our economy."

"How are you going to talk to me about 'these issues don't matter'?" Kasparian concluded.

Watch the video below from CNN's Reliable Sources, broadcast Jan. 24, 2015.