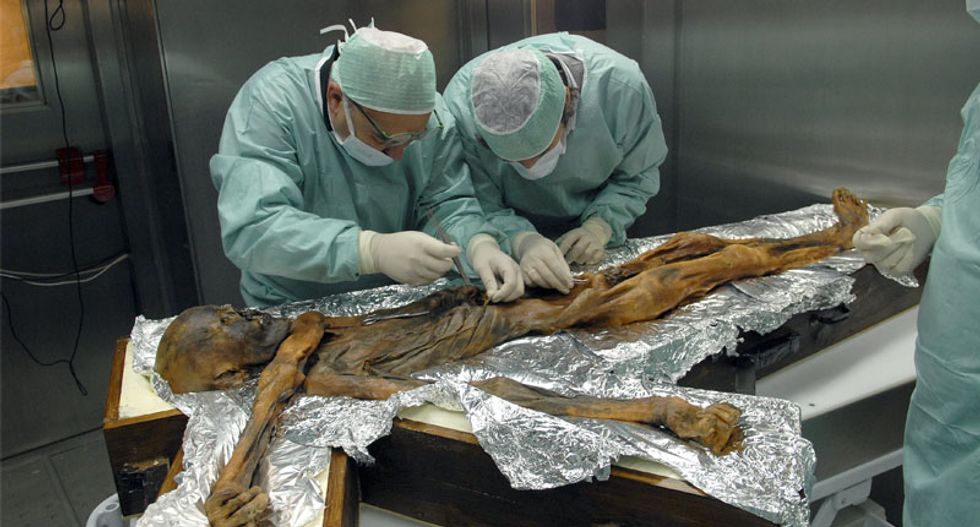 Scientists at the European Academy (Eurac) Eduard Egarter-Vigl (L) and Albert Zink (R) take a sample from the Iceman mummy in Bolzano, northern Italy, in this November 8, 2010 picture. REUTERS/Marco Samadelli/EURAC/Handout via Reuters

Archaeologists said on Tuesday they had discovered what were believed to be the best-preserved Bronze Age dwellings ever found in Britain, providing an extraordinary insight into prehistoric life from 3,000 years ago.

The settlement of large circular wooden houses, built on stilts, collapsed in a fire and plunged into a river where it was preserved in silts leaving them in pristine condition, Historic England said.

Discoveries from the dwellings in Whittlesey, in central England, which archaeologists said had been frozen in time and dated from between 1000-800 BC, included pots with food inside and finely woven clothing.

"We are learning more about the food our ancestors ate, and the pottery they used to cook and serve it," Duncan Wilson, Chief Executive of Historic England, said in a statement.

"This site is of international significance and its excavation will transform our understanding of the period."

Among the finds at the site, about two meters (6.5 ft) below the modern ground surface, are exotic glass beads forming part of a necklace, rare small cups, bowls and jars. Archaeologists also said that the site was so well preserved that even the footprints of those who lived at the site had been discovered.

There are also charred roof timbers clearly visible in one of the houses and the excavation team have speculated that those living at the settlement abandoned it in haste when it caught fire.

David Gibson, Archaeological Manager at the Cambridge Archaeological Unit, said they only usually came across a few pits or metal finds at Bronze Age sites.

"This time so much more has been preserved - we can actually see everyday life during the Bronze Age in the round," he said. "It's prehistoric archaeology in 3D with an unsurpassed finds assemblage in terms of range and quantity."