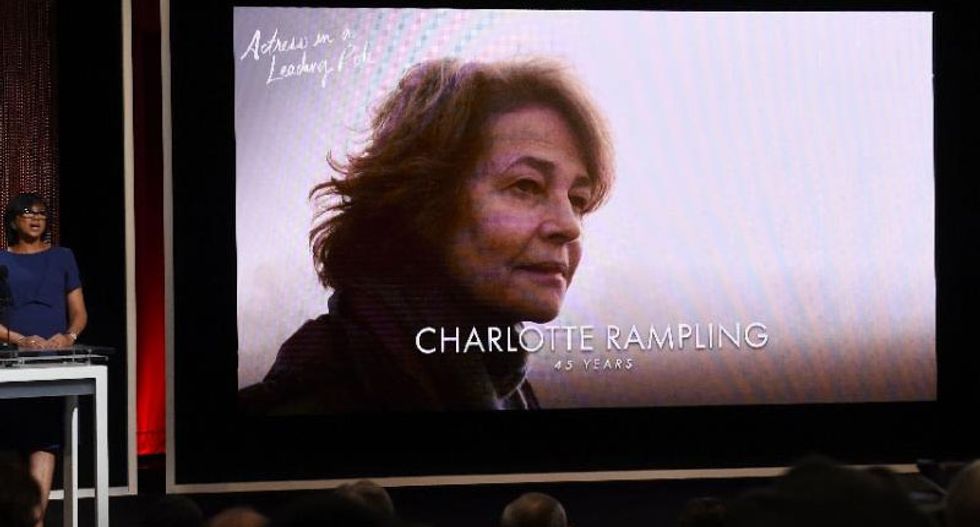 A screen shows the Oscar nominee Charlotte Rampling for the film '45 Years' in the Best Actress category during the Academy Awards Nominations Announcement in Beverly Hills, California on January 14, 2016 (AFP Photo/Mark Ralston)

British actress Charlotte Rampling, nominated for a best actress Oscar this year, said Friday that black US director Spike Lee was "racist to whites" for his stance over this year's all-white nominations lineup.

"It's in the other direction, it's racist... to whites," Rampling, nominated for her role in Andrew Haigh's romantic drama "45 Years", told French radio.

"You can never know for sure, but maybe black actors did not deserve to be in the final selection," Rampling, 69, said in French on Europe 1 radio.

She also rejected Lee's idea that the Academy Awards should have quotas to level the playing field for minorities in the Oscars chase.

"Why classify people? We live in countries now where people are more or less accepted," she said.

For a second year in a row, the Academy of Motion Picture Arts and Sciences nominated only white actors for the 20 slots for Oscars, causing an outcry.

Lee and his wife will be skipping the February 28 awards ceremony, though he has said he is not calling for a wider boycott.

Will Smith and his wife Jada Pinkett Smith will also stay away.

Lee, who won an Oscar last year honouring his lifetime achievements as a moviemaker, wrote an open letter to the academy Monday decrying the "lily white" acting nominations.

He suggested the only way things would change is if the studios adopt a system akin to that used by the National Football League, which requires that minorities be interviewed when coach or executive positions open up.

Even Academy president, Cheryl Boone Isaacs, said she was "both heartbroken and frustrated about the lack of inclusion".