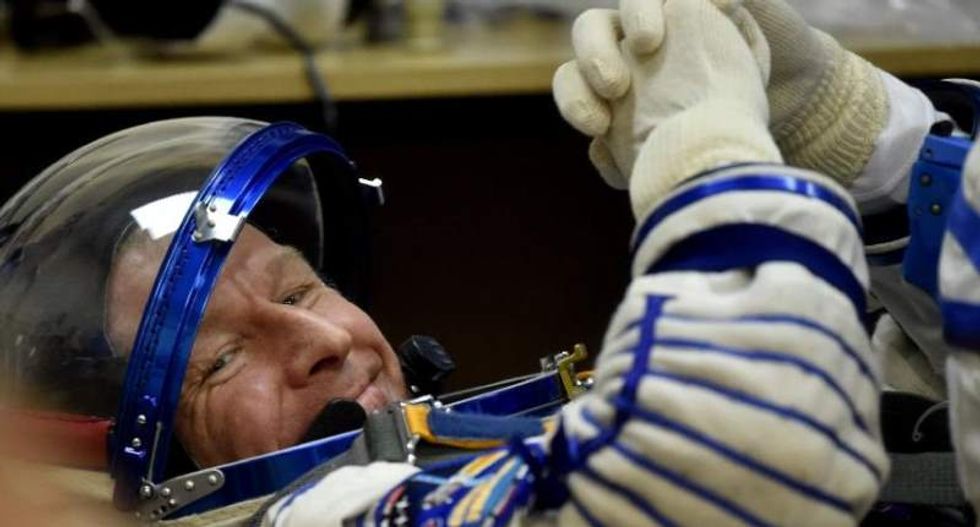 The first-ever spacewalk on Friday for British astronaut Tim Peake will require a long journey outside the space station to replace a failed power unit while under cover of darkness, NASA said Tuesday.

Hoisting a rectangular voltage regulator that would weigh 200 pounds (90 kilograms) on Earth, Peake will have to maneuver more than 200 feet (60 meters) out of the International Space Station airlock to the worksite, the US space agency told reporters.

"It's about as far at the space station as you can go from the airlock, which certainly raises the pucker factor for the crew," said Paul Dum, lead spacewalk officer, in a briefing with reporters.

Then, along with American astronaut Tim Kopra, who will be making his third career spacewalk, the duo will have to remove the broken voltage regulator in the dark so that they don't get zapped by any electrical shorts from the solar-powered equipment.

NASA isn't exactly sure why the power unit -- one of eight on the ISS -- failed, so they want the astronauts to avoid any danger from potential sparks by doing the work when the space station is doing a night pass.

"We need to protect the crew from the power that would come from the array," said Dum.

The space station orbits the Earth every 90 minutes, and spends 31 of those minutes out of the light of the Sun, according to ISS spacewalk flight director Royce Renfrew.

The task should only take about 15 minutes.

But the astronauts will have to squeeze into a small area to do their work while wearing bulky space suits and gloves.

"Imagine going out with thick winter gloves on and trying to do anything that takes fine dexterity. That is going to be challenging," said Dum.

He added that the team has practiced on Earth in a buoyancy lab, and using virtual reality equipment.

"From a station perspective, we could live in this state for a while but the reality is if we were to have an additional failure in another channel, we would probably find ourselves a little more strapped," Todd said.

"We think it is probably about time to go get this work behind us."

Peake will be known as EV 2 (extravehicular spacewalker 2) and will be wearing a white spacesuit.

His job is to carry the replacement unit out of the station and over to the work site, and tote the faulty unit back to the airlock.

Kopra, wearing red stripes on his spacesuit, will carry the tools and do the removal and installation work.

US astronaut Scott Kelly will help the two Tims get into and out of their spacesuits inside the ISS.

Mission control on Earth will use the men's first and last names when addressing them during the outing to avoid confusion, Renfrew said.

"The crew has studied hard and they are ready to go," said Dum.