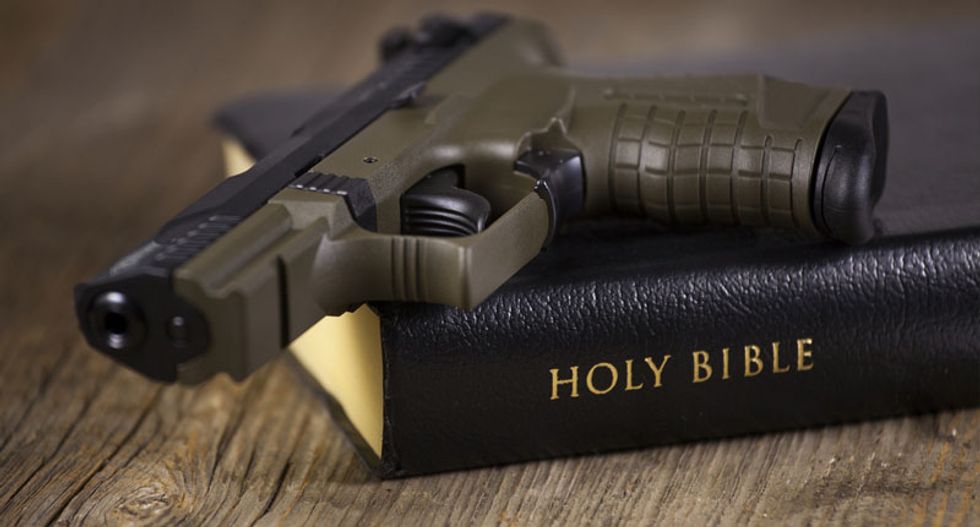 A gun and a Bible (Shutterstock)

The Catholic Diocese of El Paso has announced it will not allow firearms in church after a new open carry law went into effect in Texas.

“We’ve always talked about having a safe environment [in church],” El Paso Diocese Chancellor Patricia Fierro told ThinkProgress. “We just thought that most of our parishioners would want to go to mass without fear that the person next to them is carrying a gun.”

The new law in Texas, which went into effect on January 1, allows license holders to openly carry handguns in public. The law allows businesses and some organizations to ban firearms if they choose, but requires them to post signs declaring the ban at all entrances.

Fierro told ThinkProgress that her diocese has ordered the required signs and plans to put them up this week.

“We want people to come into our churches and feel secure — but that would mean without guns inside the church,” she said.

"Sadly, Texas has become the 45th state to embrace the cowboy mentality that permits the open carrying of guns. It is difficult to see how this new law allowing persons with concealed handgun licenses (CHL) to openly carry firearms can accomplish anything other than cause people to feel threatened and intimidated," he wrote.

"Under the new law churches may prohibit CHL holders from carrying open or concealed weapons on church premises with appropriate signage," Farrell continued. "In accordance with the law, the Diocese of Dallas will prohibit the possession of any weapon in any facility owned, leased and operated by the diocese or a diocesan entity, except as specifically permitted by diocesan policy."