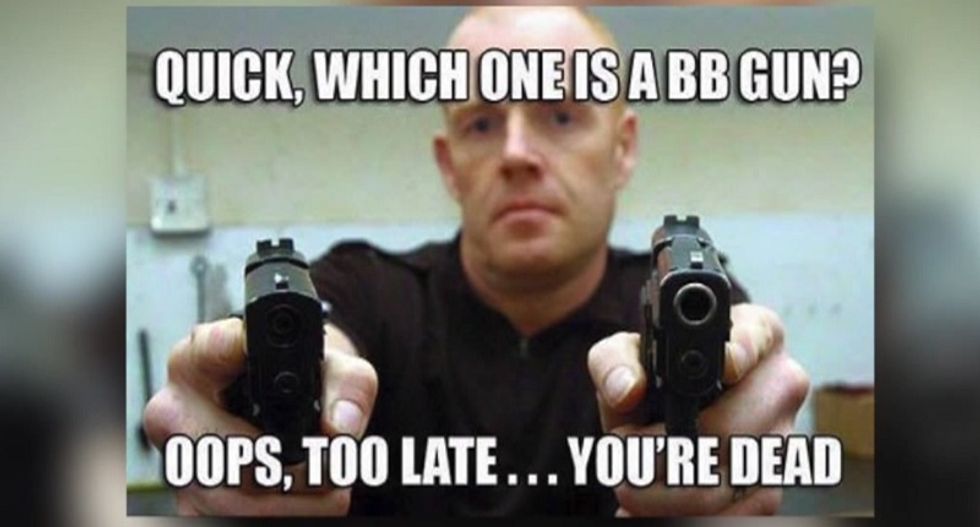 A Cleveland school police officer has been placed on paid administrative leave after a local news station started asking about a Facebook post calling the mother of Tamir Rice a "stupid b*tch."

Rice, a 12-year-old Cleveland boy, was shot and killed last year while playing with a toy gun by police officer Timothy Loehmann. Prosecutors last week declined to file charges against him. Two days after the decision was announced,Cleveland Metropolitan School District officer Matt Cicero posted the comments to his Facebook page, according to NewsNet5.

The page has since been deleted, but NewsNet took screen shots of the comments, errors included:

Tamir rices momma just want money. Lets make the proper changes......raise your kids not to play with fake guns stupid bitch. All this media because the are notgetting what they want...... Again pleeeeze anyone who does not like what I post.....unfriendly me or block me your not worth my time

Cicero responded to a Facebook friend who said the child didn't deserve to die for simply playing with a toy by saying, "You pull out a gun you get shot. I don't have time to ask questions and coddle kids that wave guns around."

"It's disrespectful to women, it's disrespectful to African-Americans," he said. "The fact that he's so insensitive and he's placing the blame of Tamir's death on Tamir, for me that's enough for him to be not working with children in the Cleveland school system."

"While we respect every employee’s right to freedom of speech, with those rights comes a responsibility to do so in ways that are appropriate and sensitive to others, particularly to the people we serve," she wrote in a statement to NewsNet.

Watch the report, from NewsNet5, as posted here: