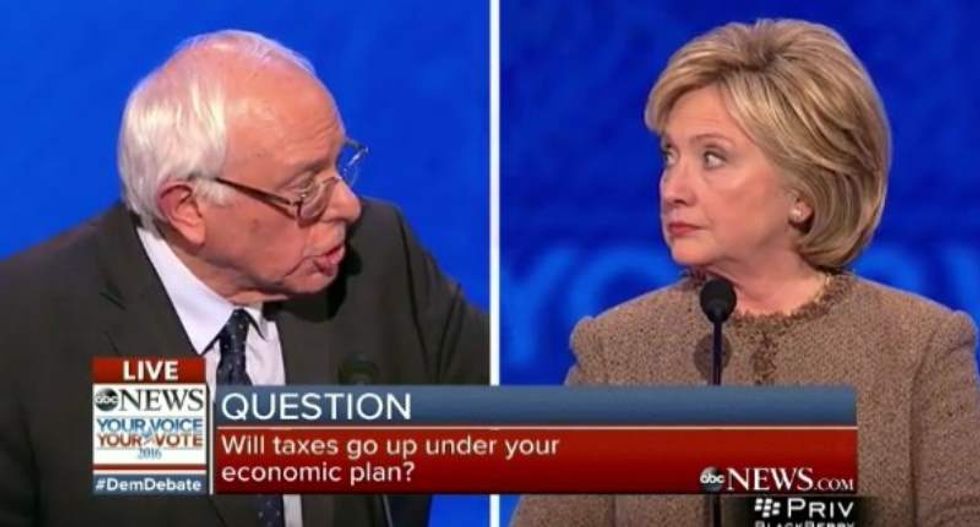 Former Secretary of State Hillary Clinton launched her most strident attack against Sen. Bernie Sanders (I-VT) on Friday when she accused him of refusing to stop giving firearms makers "immunity."

"When it really mattered, Senator Sanders voted with the gun lobby, and I voted against the gun lobby. This is a significant difference," she told MSNBC host Chris Matthews. "Maybe it's time for Senator Sanders to stand up and say 'I got this one wrong.' But he hasn't."

The criticism came amid both Democratic candidates' stated support for President Barack Obama's executive order this week expanding background checks on gun sales. Obama later said he would not support any candidate in his party who stood against the initiative.

Sanders has responded to Clinton's attacks in the past concerning the issue by noting that the National Rifle Association has given him a "D-" grade, while also saying he represents rural voters who distrust changes in gun safety policy.

On Friday, she accused the senator of supporting the "Charleston loophole" -- a rule allowing gun dealers to proceed with sales if they have not been notified by federal officials within three days of initiating a background check. The rule acquired the nickname following Dylann Roof's shooting attack in a South Carolina church last year, when it was discovered that his name failed to turn up because of a clerical error. Rep. James Clyburn (D-SC) subsequently introduced a bill eliminating the loophole.

"He said he would consider changes to the law," Clinton said to Matthews. "But that was three months ago and there's been no effort to introduce anything in the Congress or to stand with, you know, those Democrats who want to repeal this, you know, really irresponsible blanket immunity that was voted in for the gun makers and sellers."

Sanders responded on Twitter by posting an image of an ad Clinton sent during her 2008 presidential campaign in which she accused Obama -- who was then running against her for the Democratic nomination -- of flip-flopping on gun issues.

"Maybe Hillary Clinton should apologize for this?" the senator wrote. The ad can be seen below.