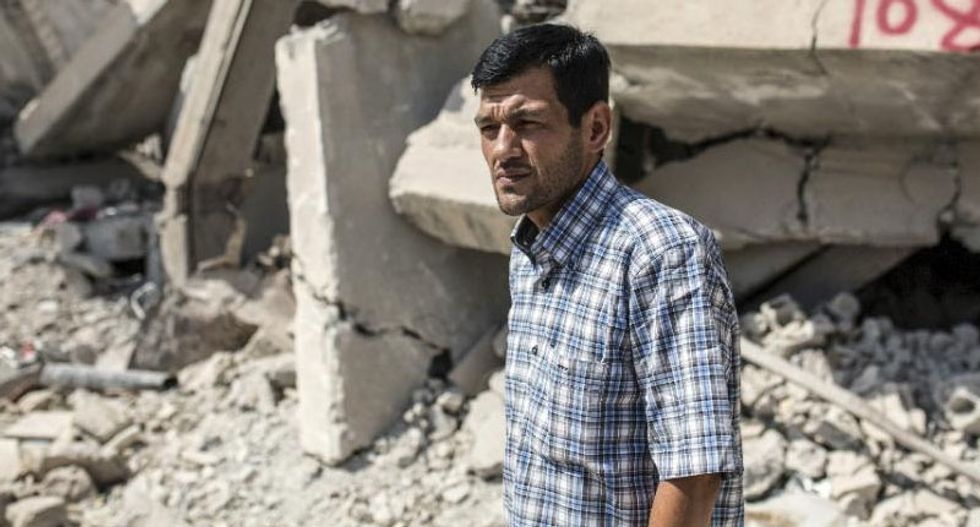 Abdullah Kurdi, father of three-year-old Aylan Kurdi who drowned off Turkey, stands in front of his neighbour's house on September 6, 2015 in Kobane (AFP Photo/Yasin Akgul)

The father of a drowned Syrian toddler wept when he saw a cartoon depicting his son as an adult involved in sexual harassment, and said Saturday that the family is "in shock."

"When I saw the picture, I cried," Abdullah Kurdi told AFP by telephone, adding: "My family is still in shock."

He also said in a written statement that the cartoon in French satirical magazine Charlie Hebdo was "inhuman and immoral" and as bad as the actions of the "war criminals and terrorists" who have caused widespread death and displacement in Syria and elsewhere.

Abdullah's three-year-old son Aylan's body was photographed lying face down on a Turkish beach after he drowned on the crossing to Greece, a bleak image that helped focus international attention on the plight of refugees making the perilous journey to Europe.

Aylan's four-year-old brother and his mother also died in the accident.

Charlie Hebdo ran a cartoon depicting Aylan as a man chasing after a woman with a caption asking: "What would have become of small Aylan if he grew up?"

"Someone who gropes asses in Germany," it said, alluding to a rash of crime targeting women at New Year's festivities in Cologne that has been blamed on migrants.

The magazine, contacted Thursday by AFP, declined to comment.