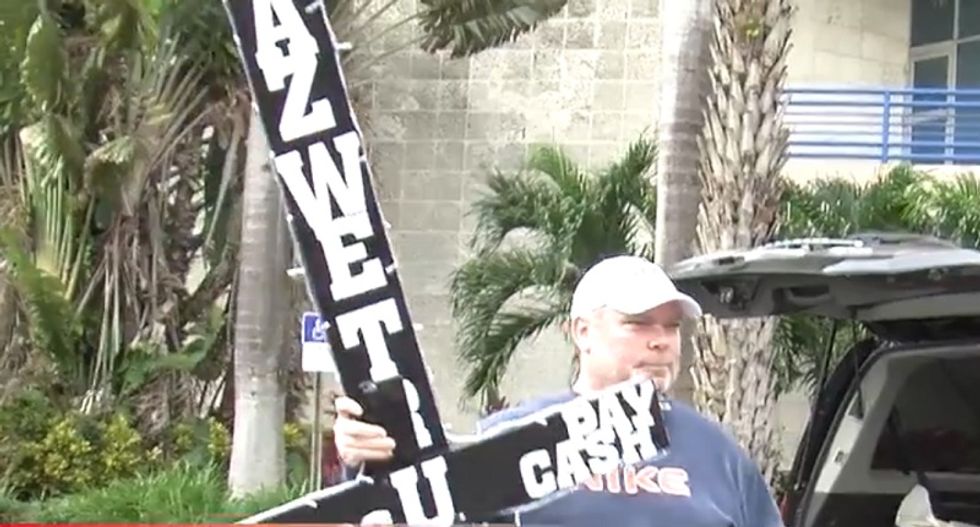 In response to religious displays on government property, an activist for the separation of church and state has placed an admittedly ugly upside-down cross on the lawn of Hallandale Beach City Hall in Florida, the Sun Sentinel reports.

Activist Chaz Stevens erected the 6-foot tall cross that bears the words, "In Chaz We Trust, All Others Pay Cash." The cross is black with white lettering and glows red at night.

"This is terrible, isn't it?" Stevens said of his creation. "It's pretty tacky. We were going for tacky. It's horrible looking. I love it."

Stevens said he sought permission for the display after seeing a Nativity scene and menorah displayed on City Hall property. The wording on the cross also reflects a push by the city's mayor to hang a banner with the words, "In God we trust" inside government chambers, according to CBS Miami.

"Government has no right to be in the business of religion," Stevens told the Sentinel. "Keep church out of state."

Stevens, who lives in Jupiter, plans to seek permission from other Florida cities for the display, namely Fort Lauderdale and Doral. He is gleefully exploiting tax code favoritism for religious organizations, saying he plans to raise money through his "Church of Satanology," go on vacation and put up a few more similar displays. The expense is, of course, a tax deduction.

"And we'll be able to go and put these horrible-looking crosses up across America," he said.

Stevens is fairly well-known for countering government-sanctioned religious displays with intentionally silly or offensive displays of his own. In December, Stevens applied to erect a rainbow Festivus pole at the Arkansas state capitol in response to a Ten Commandments monument there.

"Festivus" is a fictional holiday created by writers of the NBC comedy series Seinfeld. In the episode, Jerry Seinfeld's friend George Costanza reveals his father invented "Festivus for the rest of us" as an irreligious holiday in which a metal pole replaces the traditional Christmas tree.

Stevens, an atheist, is one of several activists exploiting so-called religious liberty laws and rhetoric to his own benefit. The Satanic Temple has discussed placing a large statue of goat-headed deity Baphomet at the Arkansas capitol to counter the Ten Commandments display.