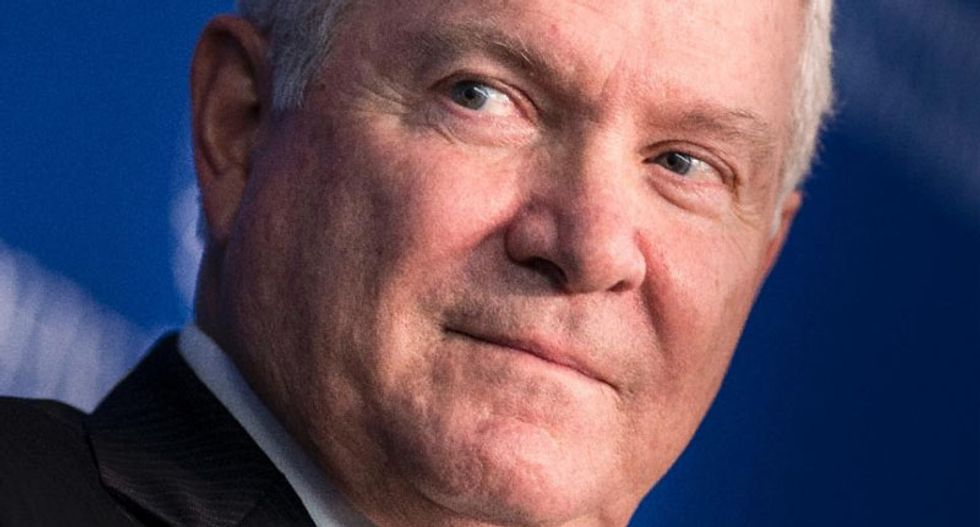 Robert Gates , a Republican stalwart and former US defence secretary who served under eight presidents, has derided the party’s election candidates for a grasp of national security issues that “would embarrass a middle schooler”.

An ex-CIA director who first joined the White House under Richard Nixon, Gates joked that if frontrunner Donald Trump wins the presidency, he would emigrate to Canada. He condemned the media for failing to challenge candidates from both parties on promises he believes are unaffordable, illegal or unconstitutional.

“The level of dialogue on national security issues would embarrass a middle schooler,” Gates said of the Republican contenders at a Politico Playbook event in Washington on Monday . “People are out there making threats and promises that are totally unrealistic, totally unattainable. Either they really believe what they’re saying or they’re cynical and opportunistic and, in a way, you hope it’s the latter because God forbid they actually believe some of the things that they’re saying.”

Gates is among Republican elders dismayed by the way this year’s campaign is unfolding with establishment figures such as Jeb Bush, whose father he served as director of central intelligence, failing to gain traction against mavericks with unusual prescriptions for keeping America safe.

Trump suggested “closing parts of the internet” to prevent Islamic State attracting recruits, Ted Cruz pledged to “carpet bomb them into oblivion”, Chris Christie proposed flying Air Force One over disputed Chinese islands and Carly Fiorina boasted of having had “a private meeting” with Russian leader Vladimir Putin when in fact they met in a green room at a conference.

Gates, promoting a new book, A Passion for Leadership, said “one of the greatest, most appealing aspects of Ronald Reagan was his optimism about this country and about the future, and these guys all make it sound like we’re going down the drain.” All the candidates, he argued, should “try to communicate better to the American people that these are complicated, difficult problems that are going to be difficult to solve and are probably going to require some sacrifice”.

The 72-year-old declined to comment on specific candidates but was pressed by interviewer Mike Allen on the prospect of Trump reaching the White House. After a pause, he replied: “Well, I live about 50 miles from Canada.”

As the audience erupted in laughter, Gates continued philosophically: “I’ve been around a long time. There are a lot of people who have run for president where people have said, ‘Oh my god, if he’s elected it’s the end of the world!’ And the truth of the matter is, it wasn’t, and so I’m not prepared to be overly dramatic and believe me, the comment I just made was very sarcastic and humorous, not meant seriously. Somebody out there will write a story that I’m going to Canada. It’s totally not true; I intend to remain within the United States.”

Gates was the only defence secretary in American history to be asked to remain in that office by a newly elected president. Working under Barack Obama, he was alongside Hillary Clinton when she was secretary of state and praised her as “tough minded” with “a lot of common sense” but admitted they began to disagree on issues towards the end, notably the intervention in Libya .

He did not mention Bernie Sanders by name but did suggest both Democratic and Republican candidates are being given an easy ride by the media. “Frankly, I think that the press needs to be more aggressive,” he said. “A lot of people in both parties are making huge promises and commitments.

“In some cases the things they’re saying they’re going to do are unconstitutional or merely against the law and others are, from a budgetary standpoint, inconceivable, and so it seems to be that the press has not hammered hard enough and been relentless in saying, ‘How the hell are you going to do that?’”

Gates condemned National Security Agency whistleblower Edward Snowden as a traitor, called on tech companies to put security ahead of business interests and cooperate with intelligence agencies on encrypted data, and repeated his past description of Putin as a “stone cold killer” which, in the light of the Alexander Litvinenko inquiry, “the British now seem to reaffirm”.

The intelligence veteran of nearly 27 years also spoke about the danger of leaks and recalled the 2011 raid in Pakistan that killed terrorist Osama bin Laden. A friend later emailed him a Photoshopped version of the famous picture in the situation room with the occupants wearing superhero costumes: Obama as Captain America, Joe Biden as The Flash, Clinton as Wonder Woman and Gates himself as the Martian Manhunter.

“And we all had a good laugh, and then I said, ‘Mr President, this is the reason the photographs of the dead Bin Laden must never be released, because somebody will Photoshop them and it will anger every Muslim in the world, even those that hated Bin Laden because of being disrespectful of the dead, and it will create greater risk for our troops in Iraq and Afghanistan and for all Americans, especially in the Middle East.’ And to the best of my knowledge those photographs are the only things about that raid that have never leaked.”

He added: “The Defense Department wrote the book on leaking. They know how to do this. But the Defense Department leaks about policy and budget and weapons programmes and stuff like that. They do not leak about military operations because they know lives are at stake. So the leaks about the Bin Laden raid for the first couple of weeks came from the White House and CIA, and I just thought that was a disgrace.”