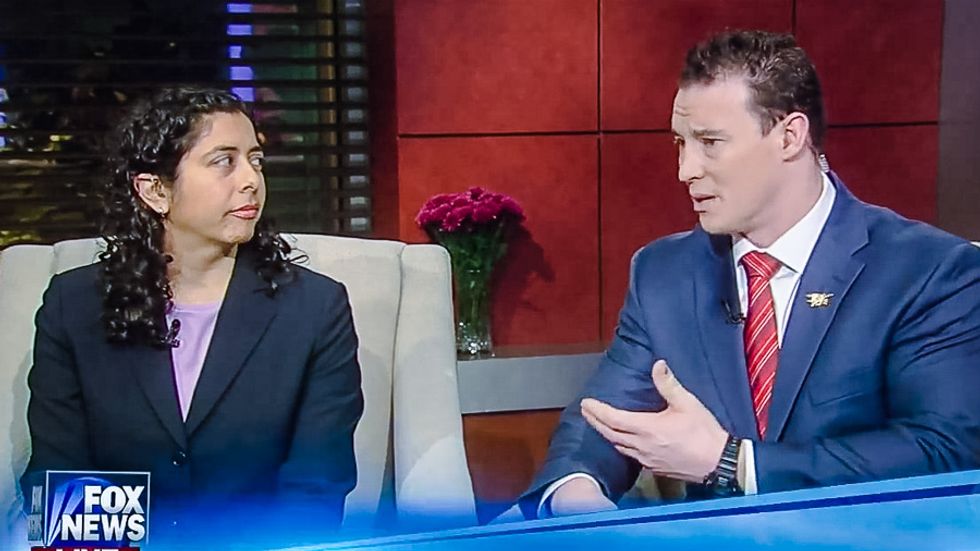 Retired Navy SEAL Carl Higbie, a frequent Fox News pundit, lashed out at Marine veteran Anu Bhagwati on Thursday because she was advocating for gender neutral titles in the U.S. military.

The U.S. Army announced last week that it would review whether titles like infantryman and armor crewman would be updated as more women were integrated into combat jobs. The U.S. Navy was also expected to review its titles.

On Thursday, Fox & Friends aired several segments suggesting that the military was wasting its resources on political correctness.

"I thought we had bigger issues," host Brian Kilmeade complained.

"It's a small step, but it's a necessary step," Bhagwati insisted. "That's part of a much larger movement of the secretary of defense to fully integrate the military, to make sure women who serve, who volunteer to serve are made to feel welcome."

Bhagwati added that she "absolutely" felt unwelcome while serving her country.

"Anything that serves to segregate us will make us feel less welcome," she explained.

But Higbie argued that the military should not be worrying about integrating women when "we have ISIS running rampant worldwide."

"The soldier's job on the battlefield is to put bullets in bad guys," he opined, turning to Bhagwati

"And if they're not going to do that -- they want to focus on what name," Higbie told the Marine veteran. "You're a woman, are you going to stop saying wo-man. I mean, come on."

"There's all this P.C. push in the military right now, but we need to focus on how does this make the military stronger," he continued. "It doesn't matter what you call somebody. Women have been integrated greatly. Women can become SEALs soon, they're getting into Rangers. They are doing everything they can to integrate them, do they have to change the name? Does it really matter that much?"

Bhagwati reminded Higbie that "most of our resources are not being poured into this."

"It's a P.C. push from a president who has never been in the military," Higbie quipped.

"This isn't about politics," Bhagwati shot back. "It's about taking care of your people."