It is like 'Nazi Germany': Federal officer furious after local cops rip apart his car looking for cash 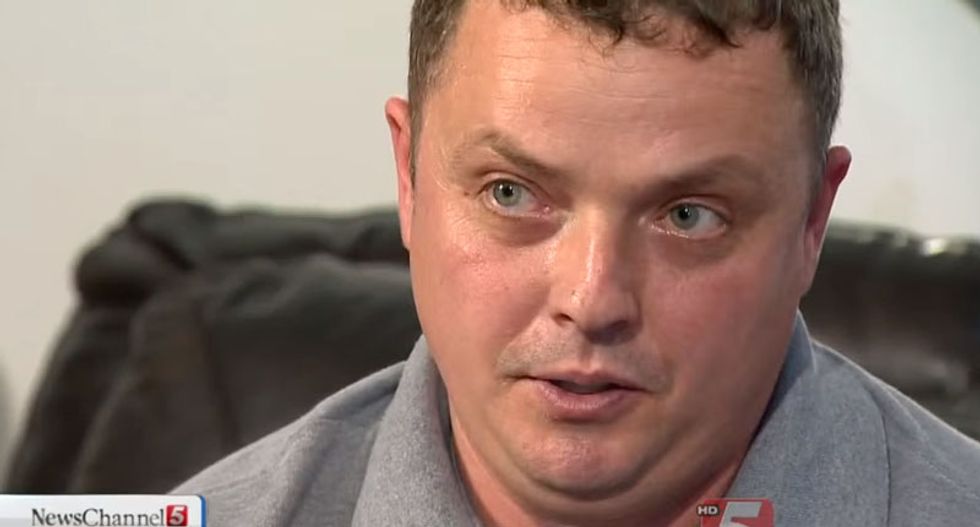 In May of 2014, Ronnie and Lisa Hankins were driving back from his grandfather’s funeral in Virginia when they were targeted by a gang of police officers in search of cash.

As Lisa drove the couple westbound down I-40, they saw an officer, who happened to be with the 23rd Judicial District Drug Task Force, and Hankins correctly predicted that they were about to be pulled over.

“I told her we are going to get pulled over,” Ronnie said to NewsChannel 5.

“What made you think he was going to stop you?” NewsChannel 5 Investigates asked.

“Because we had out-of-state license plates and my wife is Hispanic,” he explained.

The couple was then pulled over, and the officer quickly separated them before beginning his harassment of Lisa. In the video, the officer is heard badgering Lisa in an attempt to get her to consent to a search.

“You say there’s not anything illegal in it. Do you mind if I search it today to make sure?” the officer asked.

Lisa responded, “I’d have to talk to my husband.”

The cop continued to intimidate and harass her, “I am asking you for permission to search your vehicle today — and you are well within your rights to say ‘no,’ and you can say ‘yes.’ It’s totally up to you as to whether you want to show cooperation or not.”

Knowing that they had done nothing wrong and the officer had no reason to search them, Lisa continued to assert her rights and refused the search.

“You have to either give me a yes or no,” the cop continued. “I do need an answer so I can figure out whether I need a dog to go around it or not.”

After going back and forth and realizing that this couple was not going to give consent, a second officer brings out a drug dog. As the Free Thought Project previously reported, data shows that police K-9s will alert almost every single time they are called out, regardless of the presence of drugs.

The Hankins’ case, on the side of I-40, was no different.

“We’ve ran a dog, and the dog’s alerted on the vehicle. So we are going to be searching it, OK? And whatever is in there we are going to find in just a second,” said the officer to the couple.

“There’s never been any drugs in the vehicle and never will be,” Ronnie declared.

Ronnie became furious as he knew that the dog did not alert on his vehicle; he knows this because he is also a cop. He’s a federal police officer at the Marine Corps Air Station-Miramar in San Diego.

“You are lying about the dog hitting on the car. The dog didn’t hit on the car either. You guys are drug task force. You are out here harassing me and my wife when I am just coming back from a funeral,” he said.

The agent, knowing full well that Ronnie was a cop, responded sarcastically, “That is exactly how I would expect most police officers to act.”

“Just like a child, you can make a child say anything you want. You can make a dog do whatever you want to if you train them the right way,” Ronnie explained to NewsChannel 5 Investigates.

For nearly an hour, cops held the innocent couple on the side of the interstate while they tore Lisa’s new car apart. They even went so far as to rip the dashboard out. They found no drugs.

But after finding no drugs, the truth came out —  these cops weren’t looking for drugs at all — they wanted cash.

“I knew right now they were looking for money to fund their operations,” said Ronnie.

“Well, I’ll be honest with you,” the officer began, as he attempted to justify this outrageous violation of rights. “With you going this direction, I wouldn’t think you’d have drugs in the car — you would have a large amount of money,” he said.

After the cops were finished searching for cash and didn’t find any, they eventually let their victims go. But to support their unlawful detainment, also known as attempted robbery, the officers wrote in the report that they found “marijuana debris” in the driver and passenger floor boards. This ‘debris’ was nothing more than grass from the couple’s feet from the cemetery where Ronnie’s grandfather was buried.

The unfortunate reality of this situation is that nothing will happen to these officers. In their minds, the Hankins are criminals who deserved this treatment and got off lucky without having their property stolen. These officers will continue to rob people on the side of the road as it’s not only condoned by their departments; it’s their entire function — necessary for their own self-preservation.

“It seems like Nazi Germany,” said Ronnie. “You’ve got to have the paperwork and the proper authorities to come through Tennessee.”

Until we end the war on drugs, these cases will continue to become more prevalent and less pleasant. When police officers are referring to the situation created by other police officers as ‘Nazi Germany,’ the time for immediate action is now.

For a list of peaceful fixes to the many problems created by the drug war, please take a scroll through our #solutions section.

This article was originally published by Free Thought Project

A tale of two capital cities: Texas Democrats continue fight for voting rights in Washington as Republicans push them to return

Outside of the Texas House chamber, state Rep. Briscoe Cain is setting traps for Democrats.