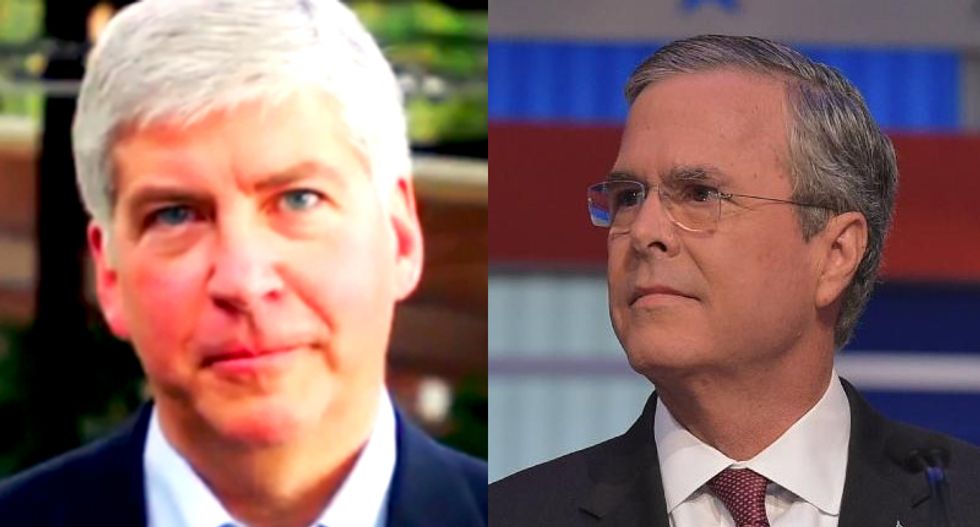 Jeb Bush on Sunday praised Rick Snyder, the beleaguered governor of Michigan, for “stepping up” in response to the crisis over lead-poisoned drinking water in the city of Flint.

Emails show that Snyder, a Republican, ignored and dismissed the problem more than a year ago, even as children began showing signs of irreparable lead poisoning. A federal state of emergency has been declared.

Calls for Snyder’s impeachment or resignation have come from many quarters, including the Democratic presidential candidate Bernie Sanders.

Appearing on CNN’s State of the Union , former Florida governor Bush, a candidate for the Republican presidential nomination in 2016, said big government was most likely to blame for the crisis, which occurred after state emergency managers switched the city’s water supply from Lake Huron to the Flint river in a cost-cutting measure.

“I admire Rick Snyder for stepping up right now,” Bush said. “He’s going through the challenge. And he’s fired people and accepted responsibility to fix this. This is going to be a long-term challenge.”

Bush said he had criticized Snyder on the issue, but now applauded the governor for his actions. This week, Snyder apologized.

In an interview with MSNBC on Friday, Snyder said: “I’ve made a focused effort since before I started in office to say we need to work hard to help people that have the greatest need. This was a terrible tragedy. These people work for me. And that’s why it was important to accept responsibility, and my focus is on fixing this problem.”

On Sunday, Bush said: “Instead of saying ‘the dog ate my homework’ and ‘it’s someone else’s fault’, once it became clear, [Snyder has] taken the lead … and that’s exactly what I think leaders have to do.”

In a visit to Michigan this week, Barack Obama said : “If I was a parent up there, I would be beside myself that my kids’ health could be at risk. And that’s why … I declared a federal emergency in Flint to send more resources on top of what we’ve already put on the ground.”

Bush said city, state and federal officials should be talking more about the crisis, which he blamed on “a 20th-century regulatory system in a 21st-century world.

The former governor said he wanted “more accountability and more transparency, so that when reports are done they’re thoroughly vetted”.