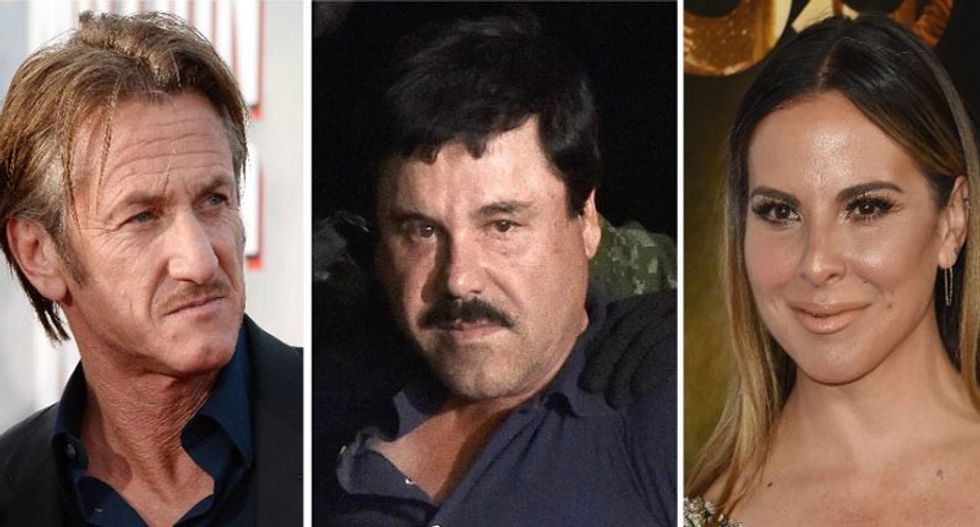 Mexican drug lord Joaquin "El Chapo" Guzman was infatuated with actress Kate del Castillo and his desire to see her again contributed to his downfall after six months on the run, officials said.

Del Castillo, a Mexican-American who played a drug kingpin in a television series, brokered the now-notorious meeting between Guzman and US actor Sean Penn at an undisclosed jungle clearing in October, three months before the fugitive's capture.

The government officials said investigators had monitored Penn and Del Castillo, taking photographs of the actors when they landed in Mexico, before their get-together with Guzman.

Following the meeting, troops entered Guzman's remote mountain stronghold in northwestern Mexico in order to flush him out "toward a city," a government official said on condition of anonymity.

Marines nearly captured Guzman in the mountains straddling the states of Sinaloa and Durango on October 6.

But Guzman grabbed his cook's daughter and used her "as a human shield," holding her in front of him as a helicopter hovered overhead, prompting the soldier to hold fire, the official said.

Guzman eventually made his way last week to the seaside city of Los Mochis in his native Sinaloa state, where he was captured Friday in a deadly military operation.

The other factor that led Guzman to Los Mochis was that he was "really very interested in meeting the actress again," the official told reporters.

"This was an almost obsessive interest that turned into another incentive to go down to the city, where he wanted to meet with her," the official said, adding that Guzman did not see the 43-year-old actress again.

Another official said Guzman, 58, used the codename "hermosa" ("beautiful") when referring to the actress, who became famous for her role as a drug lord in the TV series "The Queen of the South."

DVDs of the show were found in the house that marines raided in Los Mochis.

Guzman fled the house through a tunnel during a gunfight between troops and his henchmen, but he was caught later after he had stolen a car, capping a months-long manhunt involving 2,500 investigators and federal forces, officials said.

One of the world's most-wanted criminals was returned to the same prison he escaped from six months ago when his henchmen dug a 1.5-kilometer (one-mile) tunnel that opened into a hole in his cell's shower.

Guzman is regularly being moved to new cells in different floors and a guard is posted in front of it 24 hours per day to prevent him getting away once more.

Penn, in an article published by Rolling Stone magazine on Saturday, said del Castillo had been in contact with Guzman while he was in prison through letters after the kingpin's attorney approached her.

The drug lord wanted to make a film about himself but "would entrust its telling only to Kate," Penn wrote.

President Enrique Pena Nieto's spokesman, Eduardo Sanchez, said the clandestine meeting between the actors and Guzman was under investigation.

Sanchez said the government "regrets any acts of collaboration between any citizen and members of organized crime" or that a Mexican citizen "does not share" information that would help arrest a criminal.

Legal experts doubt that the actors will face charges, especially if their meeting with Guzman is seen as journalistic work.

But they could face money-laundering charges if there was a transaction for a film made with "money from illegal sources," legal expert Juan Velazquez told AFP.

Del Castillo sparked uproar in 2012 when she wrote on Twitter that she believes "more in Chapo Guzman than the governments."

She later said that her messages to Guzman were "ironic" but Penn wrote in Rolling Stone that the kingpin sought to send her flowers afterwards.

Guzman is now back at the Altiplano maximum-security prison some 90 kilometers west of Mexico City while authorities seek to extradite him to the United States.

As well as moving him from cell to cell, officials said other steps have been taken to prevent Guzman -- who escaped from another prison in 2001 -- from breaking out a third time.

After his July 11 escape, a dozen prison officials were detained and security was increased with extra surveillance cameras and metal rods in the floors to prevent new tunnels.

"Each and every each one of the flaws have been fixed," an official said.