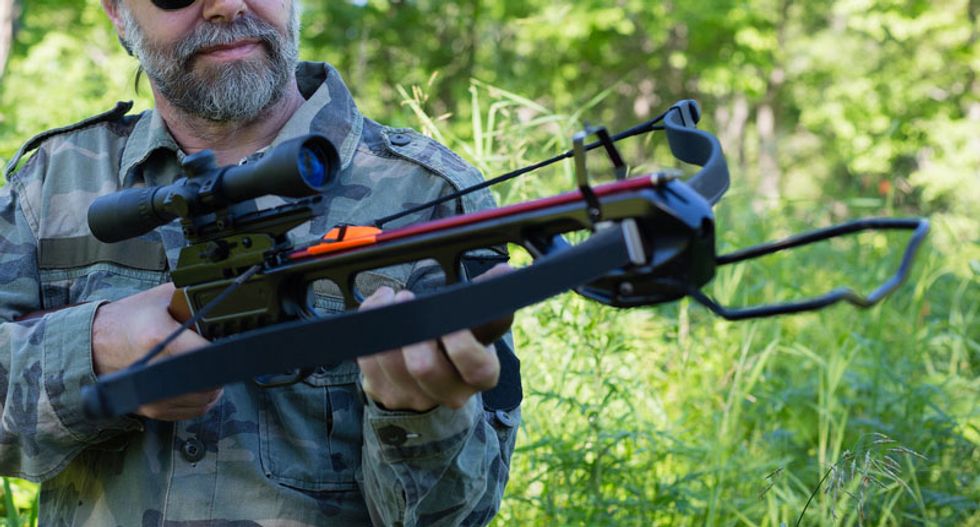 A hunter holding a crossbow (Shutterstock)

The case of a former Ku Klux Klan leader convicted of killing a 16-year-old black girl with a crossbow is being reviewed by the North Carolina Parole Commission, according to the Charlotte Observer.

Russell Hinson, the "Exalted Cyclops" leader of the KKK in the late 1980s, was convicted of first-degree murder for shooting Felicia Houston in the chest with a crossbow as she walked down a sidewalk in 1992. Hinson was reportedly upset that he had been ripped off by a black drug dealer -- and wanted to take revenge on the black community. "I'm going to shoot a n****r through the heart," he told a friend.

An all-white jury quickly found him guilty after a six day trial.

His case is now being reviewed by the State Parole Commission, which examines first-degree murder convictions every three years once a convict is eligible for parole. Hinson was previously denied parole in 2013.

Hinson says he is a changed man, and hopes to win his freedom. He has the support of at least one family member, his uncle Dennis Long.

“There’s no hatred there any more,” Long told the Charlotte Observer.

Long said Hinson had found God in prison and now has African-American friends.

"We just have to learn to forgive," Long said.

“If it hadn’t been for him, she would still be around with us,” he told the Charlotte Observer. “He got life; he should do life.”