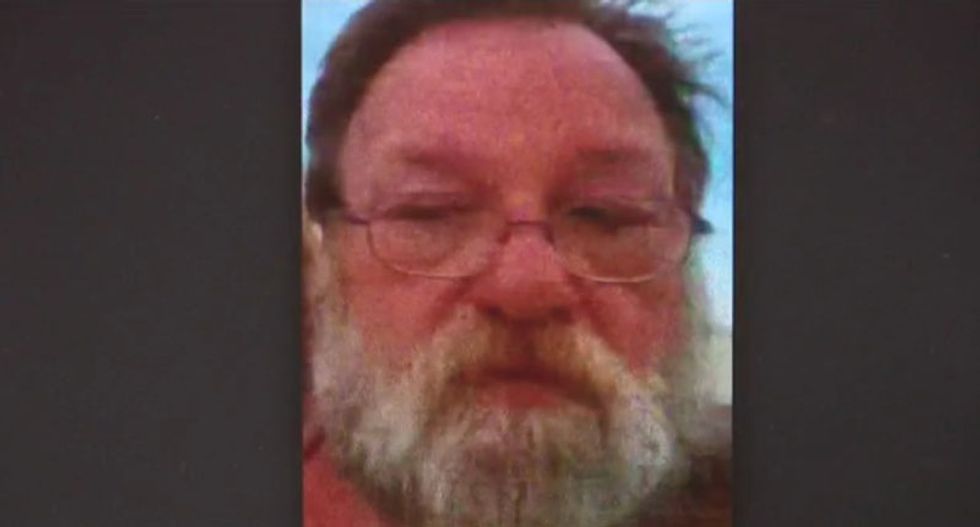 Naked, agitated and restrained in a chair, Jack Marden pleaded with officers to remove a “spit hood” covering his face, to let him breathe.

The clash on 11 February began when the 56-year-old, locked up in Midland County jail on assault charges, became combative with sheriff’s deputies following brief questioning by a pair of healthcare workers.

The workers – called in by a sheriff’s deputy after an earlier dispute with Marden – asked officers to move the inmate back to his cell, at which point Marden began to act belligerently, deputies later said, complaining that “people were trying to hurt him” and “that the French government was confiscating his money”.

The situation – depicted in a federal lawsuit, documents and handheld video obtained by the Guardian – continued to escalate. Concerned by his erratic action in the cell, where officers said the 205lb Marden showed signs of “superhuman strength”, a deputy ordered a group of emergency response team officers to transfer him to a hospital for observation.

Within minutes, officers had entered Marden’s cell and pinned him to the ground. A deputy struck him in the head, after Marden managed to “grab his testicles and squeeze”, an incident report stated. As officers worked to restrain Marden, a deputy placed a spit hood over his face, the report continued, as Marden had “begun to manipulate his mouth as if he intended to spit”.

Following a struggle that lasted several minutes, the situation didn’t improve: Marden, a father of two with a history of severe depression and coronary heart disease, suffered a “severe anoxic brain injury … proximately” caused by the altercation and died days later, the lawsuit said.

The sheriff of Midland County, Scott Stephenson told the Guardian he couldn’t comment, citing pending litigation. The neighboring sheriff’s office in Mecosta County reviewed the incident and found no wrongdoing. No deputies involved in the altercation were suspended.

But the incident is receiving renewed attention in the wake of the two-count wrongful death lawsuit filed by Marden’s wife, Sharyl, against Midland County and several officers who were involved. The suit asks for financial damages in excess of $75,000.

In particular, the lawsuit focuses on the use of a spit hood, a fabric covering that is placed over the head to prevent inmates or detainees from spitting on deputies.

“[Officers] … placed a spit mask on the face of [Marden] thereby constricting his ability to breathe despite observing and hearing Jack Marden state that he was having difficulty breathing … causing plaintiff’s decedent to asphyxiate and suffer cardiac arrest,” the lawsuit said.

“That usually causes people to be very agitated,” Olsman said.

“You don’t want to get that spit in your eye … because if he’s contagious you’re going to get contaminated. It can cost you your life,” Martinelli said. “So that is definitely a reason why they would put a spit mask on.”

But several incidents and lawsuits in recent years have raised concerns about the impact spit hoods can have on inmates. The use of a spit hood has been cited in lawsuits that have cost cities across the US millions in settlements for improper use.

In October, a Tennessee county was ordered to pay a $150,000 settlement in a case that involved a detainee who died after officers used a spit hood on an inmate . The heavily intoxicated man complained he couldn’t breathe in the spit hood, the Tennessean reported , but officers soon found he was unconscious.

“When officers took the spit hood off,” the newspaper reported, “vomit spilled out.”

Last year, a 19-year-old Florida man died in custody after corrections officers pepper sprayed him in the face, restrained him in a chair and placed a spit mask over his face. In 2013, a 41-year-old man died in the custody of the Milwaukee county sheriff’s office; the man complained he couldn’t breathe when officers put a spit mask over his entire head . In response, the officer replied: “You’re talking, you’re breathing,” the Milwaukee Journal Sentinel reported .

Edwin Budge, a Seattle-based attorney who has represented several clients in spit hood-related cases , said they can become problematic if an inmate is experiencing a psychotic episode.

“They’re breathing hard, or attempting to breathe hard, because they have a greater need for air,” Budge said. “When you put that all together, the combination of forcible restraint, the increased need for air … they are, in my opinion, extraordinarily dangerous.”

Inside the Michigan jailhouse, the struggle with Marden rapidly deteriorated after officers first entered his cell. With a white, mesh mask now covering his face, officers implored a visibly agitated Marden to relax, despite his complaints that he was struggling to breathe.

“We’re trying to let you breathe, brother,” Derocher said. “You’ve got to relax, though. You’ve got to stop fighting us, man.” Moments later, Derocher called for a nurse: “He’s got agonal breathing and shit.”

Martinelli, who declined to comment on the specifics of Marden’s case but agreed to speak generally about the application of spit masks, said if an officer identifies that an inmate is experiencing agonal breathing – abnormal gasps of air – then a spit mask needs to be removed.

“Agonal breathing is extremely serious,” Martinelli said. “It could be deadly. It is usually an indication that death will come shortly.”

He continued: “You don’t leave the mask on. You do everything you can … to facilitate breathing.”

For Marden, the spit-mask was removed several minutes after the quarrel with officers began. Eventually, a deputy asked: “Do you want to try to get that mask off, or do you want to leave it on so he doesn’t spit?”

A nurse at the scene quickly responded: “I would like to get it off; I think it might help him breathe.”

In the video, Marden’s health appeared to worsen, as the group of officers moved him to a restraint chair, still pleading with him to relax.

“His hands are really discoloring now,” one deputy said.

Moments later, Marden lost consciousness. Officers soon transferred Marden to a medical center by ambulance. He was in acute pulmonary arrest upon being admitted, the lawsuit said.

Marden had a documented history of heart diseases involving stents, attorney Olsman told the Guardian, “which they knew about”.

“Plus, he had a prior history of a prior cerebral aneurysm, and this guy’s whaling on him in the head,” he said. “So [it’s] very bad, the whole thing all the way around.”

Watch video, via ABC12 News, below: