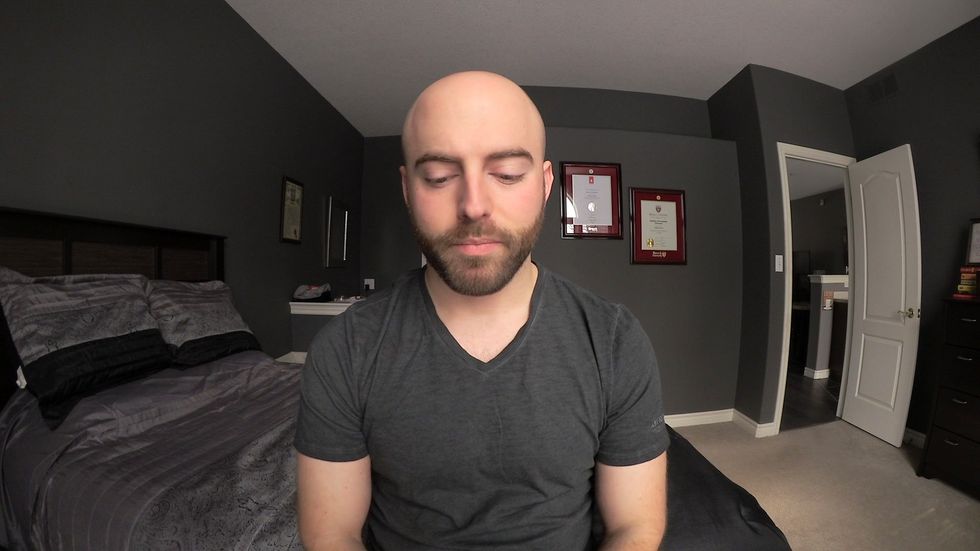 It's tremendously difficult for domestic violence victims to speak out about what they've gone through in an abusive relationship. But that difficulty is certainly amplified when the victim is a male public figure who has to deal with unreasonable gender expectations.

Matthew Santoro is no exception.

The fabulously successful YouTube personality recently disclosed his experience in a physically and emotionally abusive relationship. Santoro's YouTube video, which was originally set to private after he ended the relationship around September of last year, was accidentally made public recently. He decided to keep it that way after experiencing some support from his fans.

A tearful Santoro explains how at first he was manipulated into isolating himself from his friends and family because of his girlfriend's jealousy, and was even eventually punched in the face.

"This individual I was with was extremely jealous, viciously jealous," he said. "If I had a female friend, I must have been cheating on her with them."

After attempting to break things off due to a panic attack he suffered from the abuse, the woman convinced him to take her back a month after the breakup. The abuse allegedly continued, and culminated with his ex striking him in his face.

"It's something men never talk about, because we're made to believe that we're supposed to be strong," Santoro said. "I never talking about it because I thought that no one would believe me, no one would give a shit."

Santoro is right - domestic violence knows no gender, and I give him a tremendous amount of credit for speaking out and empowering all victims to say something if they've had similar experiences. I wish he would have reported the woman to the authorities so there would be some justice. But I also understand that getting authorities involved can lead to more trauma.

There's another curious wrinkle to the story that's worth mentioning:

Although Santoro did not name the woman in question, it's been well documented that he dated Nicole Arbour, who's another (much less successful) YouTuber. If the name sounds familiar, it's because she's notorious for her breakout fat-shaming video called "Dear Fat People." She later claimed that the video was a publicity stunt when she got fired from choreographing a body positive dance video for teens. You couldn't make up a more ironic situation.

At first I was resistant to accusing Arbour of being the person Santoro was referring to in his video, but I didn't have to resist for too long since she made public statements to incriminate herself. Arbour responded to Santoro in a comment on her latest YouTube post by writing, "Heard the little bitch I dumped months ago is still trying to use me to get attention on his vlog channel. Ew."

Arbour later uploaded her own YouTube response to Santoro, but opted to disable comments and the like/dislike feature. Interesting how she's comfortable doling out hideous insults, but can't handle receiving them. Her video denies any wrongdoing, and even goes so far as to accuse Santoro of going against her wishes of keeping their private life out of YouTube videos.

Arbour also claims Santoro is making everything up to gain followers and attention, even though she has less than 300,000 subscribers, while Santoro has a whopping five million on one of his channels, and more than 700,000 on his vlog. Also, it's probably best to refrain from calling the person who's accusing you of physical and psychological abuse a "little bitch."

At this very moment, we unfortunately have no evidence that she abused him. However, I do know that it's not easy for a man to talk about how he was victimized by a woman in our machismo society. Male domestic violence victims are more common than people realize, and they're rarely talked about. It's also difficult to gather concrete statistics on the matter since men are reluctant to report abuse to the authorities.

Santoro made an impact by sharing his story, and hopefully it will convince all victims, both male and female, to report abuse as soon as they experience it.