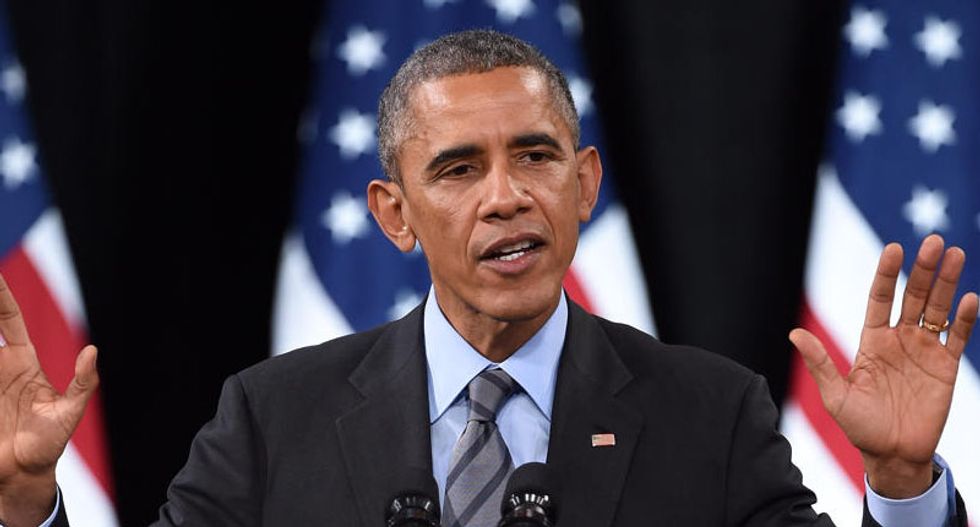 Barack Obama once confessed to politics’ original sin but has yet to atone for it. He now has an opportunity to do so.

I speak of his promiscuous relationship with money in politics. During his 2008 race for the White House, Obama opted out of the public funding system for presidential campaigns — the first candidate of a major party to do so since the system was created in 1976, after the Watergate scandals. His defection chilled hopes that public funding might enable everyday citizens to check the power of the super rich and their super PACs, countering the influence of “dark money” — contributions that cannot be traced to their donors.

A friend of mine, a prominent conservative Republican who champions campaign finance reform (yes, there are some and we get along marvelously!) recently told me he believes Obama’s decision was a significant blow to the cause for reform. Six years ago, the conservative majority on the Supreme Court tried to finish it off when they ruled for Big Money — unlimited amounts of it — in their Citizens United decision.

In his first State of the Union in 2010, President Obama denounced Citizens United, saying that it would reverse a century of law and open “the floodgates for special interests.” He was just as blunt last year when he declared flatly that Citizens United was “wrong” and had caused “real harm to our democracy.” Right on all counts. Public interest advocates Lisa Gilbert of Public Citizen and Stephen Spaulding of Common Cause recently reminded us that since Citizens United “special interests have spent over $500 million from secret, undisclosed sources.”

Think of it as poison poured into the mainstream of democracy, just as toxic as the lead released in Flint, Michigan’s drinking water.

Americans of every stripe know money corrodes our politics. In a poll last year, The New York Times and CBS found that 85 percent of us think the system for funding political campaigns should be fundamentally changed or completely rebuilt.

President Obama knows it, too. Despite his own apostasy, he has spoken eloquently over the years against the present system.

Unfortunately, he has done nothing about it. He’s gone AWOL in our biggest battle for democracy.

Which brings us back to his confession. During that first campaign for president, the Boston Globe reported that “In Obama’s eight years in the Illinois Senate, from 1996 to 2004, almost two-thirds of the money he raised for his campaigns — $296,000 of $461,000 — came from PACs, corporate contributions, or unions…and many other corporate interests…”

Confronted with this by Tim Russert on Meet the Press, Obama replied: “I have said repeatedly that money is the original sin in politics and I am not sinless.”

Far from sinless, he has in fact been a serial sinner. From repeated campaigns for the state legislature, through his one campaign for the US Senate, to his last campaign for president in 2012, money from organized interests poured into his coffers. The finance industry, communications industry, the health industry — they all had a piece of him, sometimes a very big piece. In his defense, Obama said he could not “unilaterally disarm.” So like the young Augustine of Hippo, who prayed, “Lord, grant me chastity… but not yet,” Barack Obama was saying that when the time arrived, he would sin no more.

Well, Mr. President, it’s time. You have no more campaigns to wage. With a little less than 12 months left in the White House, you have the opportunity to atone for exploiting a system that you have deplored in words if not deeds. You can restart the engine of reform and even demonstrate that Citizens United can be tamed. Just take out your pen and sign an executive order compelling federal contractors to disclose their political spending. In one stroke you can put an end to a blatant practice of political bribery that would be one small step for you and one giant leap for democracy.

It’s an open-and-shut case. In fewer than five minutes, you could face the cameras and announce your decision:

My fellow Americans. I have today signed an executive order requiring any company with a federal contract to disclose how much they spend on politicians and lobbyists, and who is receiving their money.

There are several reasons for this.

First, federal contracting is big business. In 2013 alone, the United States government spent about $460 billion dollars on contracting, with $177 billion of that going to just 25 companies.Since the year 2000, the top 10 contractors have raked in $1.5 trillion in federal contracts.

That’s your money. All of it comes from taxpayers. And as the economic analyst Robert Reich reminds us, you are footing the bill twice over. You pay for these corporations to lobby for those contracts. Then you pay for the stuff they sell us. It’s only fair that you see how much it costs for corporations to buy influence.

Second, there is a direct relationship between what a corporation spends on campaign contributions and the amount it receives back in government spending. Federal contractors have long been banned from contributing to federal candidates, parties or political committees, but that ban does not apply to their executives, shareholders and political action committees. In fact, since the Citizens United decision in 2010, contractors have been free to contribute unlimited amounts of undisclosed money to super PACs and the shadowy operations known as “social welfare organizations.”

It’s now possible for companies that get government contracts to secretly — let me say it again, secretly — spend untold amounts to elect and re-elect the very legislators who are awarding them those contracts. That’s wrong. It’s a terrible conflict of interest that undermines the integrity of government.

Some of you will remember that I said the Citizens United decision would harm democracy. I wish it were not so, but I was right; this secrecy in influence peddling by federal contractors is a bad thing. It wastes your money. It distorts the relationship between your government and business. It works against start-up entrepreneurs who can’t afford to hire lobbyists or make political contributions while entrenched old-line companies hire former government officials — members of Congress and their staffs in particular — to steer business their way. Let’s put an end to these practices, once and for all.

Third, an open democracy is an honest democracy. Disclosure is the foundation of public trust in government and business, while secrecy invites corruption. Even the Supreme Court justice who wrote the majority opinion for Citizens United acknowledged this to be true. Justice Anthony Kennedy belongs to another party than I. He adheres to a different ideology. But listen to what he wrote: “With the advent of the Internet, prompt disclosure of [political] expenditures can provide shareholders and citizens with the information needed to hold corporations and elected officials accountable for their positions and supporters. Shareholders can determine whether their corporation’s political speech advances the corporation’s interest in making profits, and citizens can see whether elected officials are ‘in the pocket’ of so-called moneyed interests.” I agree with Justice Kennedy.

You see, undisclosed money — “dark money” — is not “free speech” as its proponents claim. To the contrary. It’s a threat to free speech, especially to citizens like you. Even if you believe money is speech, don’t you and every other American have a right to know who’s speaking? Secrecy weakens democracy’s backbone, causing it to become brittle — so brittle that fractures are now commonplace. That’s one reason Washington is broken and dysfunctional.

As Justice Kennedy himself — the author of the Citizens United decision, remember — recently admitted, our system “is not working the way it should.” The executive order I have signed today is a step toward helping us see why it is not working and giving us a way to start fixing it. We are casting sunshine on a system badly in need of light.

Sadly, I must report to you that Republicans in Congress are opposed to sunshine. They prefer government do business in the dark, out of your sight and away from the prying eyes of reporters. But the Sunlight Foundation has discovered that over one recent five-year period 200 of the most politically active corporations spent a combined $5.8 billion on federal lobbying and campaign contributions and, in return, got $4.4 trillion in federal business and support. Yes, $4.4 trillion — with a “t”. That’s an enormous return on their investment in lobbyists and politicians.

Earlier this month I delivered my last State of the Union address to you. I told you that, “We have to reduce the influence of money in our politics, so that a handful of families or hidden interests can’t bankroll our elections. And if our existing approach to campaign finance reform can’t pass muster in the courts, we need to work together to find a real solution.”

My record on this issue may not inspire confidence, but I offer this executive order as an act of genuine penitence. And I pledge to you that in my remaining months as president I intend to take more steps to put right what I have helped to keep wrong.

When I leave this office next January there will be no private citizen in the country more active in the fight to save our public life from the pernicious grip of private greed.

I am not a saint; I am a sinner. But I have been born again — again. And this time I will keep the faith. If you believe in democracy, join me.

Thank you and good night.

A note to our readers: Some observers in Washington think President Obama may be about to sign such an order. We are not so sure. He reportedly came close in 2011 when the draft of such an order was leaked. The US Chamber of Commerce and other lobbyists roared and the president backed down. The only spunk he has shown on the issue since has been rhetorical. So he could once again capitulate. You can help to stiffen his spine by signing the petition sponsored by the non-partisan group Public Citizen

As the president himself concluded in his most recent State of the Union address: “Changes in our political process… will only happen when the American people demand it. It depends on you. That’s what’s meant by a government of, by, and for the people.” OK, agreed. But in the meantime, let’s tell the president to stand tall like a leader and do the right thing. Mr. President, sign the executive order compelling federal contractors to disclose all their political spending, including dark money.

My long-time colleague Gail Ablow reported and researched this column.

Bill Moyers is the managing editor of Moyers & Company and BillMoyers.com.

This article first appeared at BillMoyers.com

Mexican President Andres Manuel Lopez Obrador called Sunday for intensified efforts to save 10 workers trapped in a flooded coal mine, during a visit to see firsthand the rescue operation.

Relatives of the missing were becoming increasingly desperate four days after the mine flooded in the northern state of Coahuila, fearing time is running out to bring them out alive.