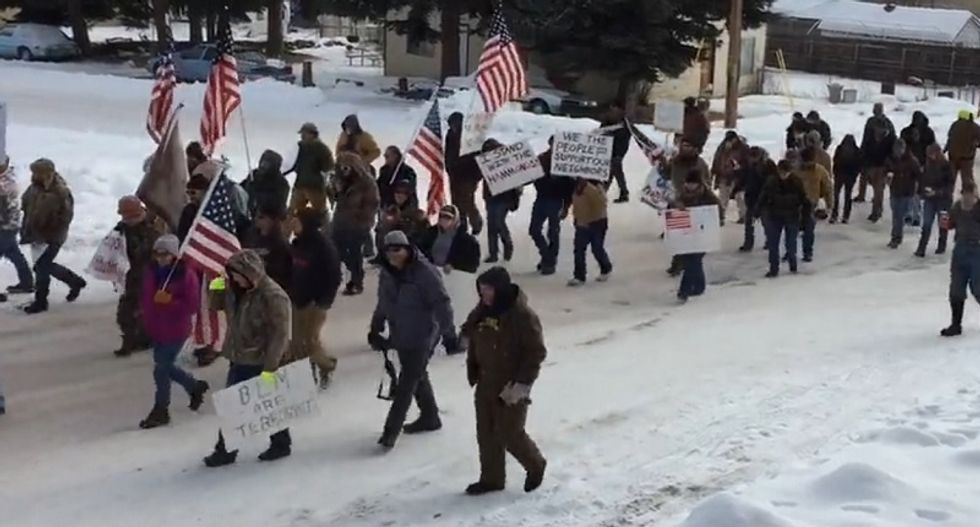 UPDATE: Militia members protesting a federal prison sentence for two Oregon ranchers convicted on charges of setting fire to federal land have occupied the headquarters of a national park, the OregonLive reports.

The protesters include Nevada rancher Cliven Bundy's son, Ammon, and two of his brothers. Also among them is Ryan Payne, who organized snipers to aim weapons at federal officers during the Bundy Ranch standoff last year.

They told OregonLive that they are accompanied by about 150 others and are hunkered down at Malheur National Wildlife Refuge headquarters. The group is described by reporter Les Zaitz as "hard core militia" who adopted the ranchers' cause as their own.

"The facility has been the tool to do all the tyranny that has been placed upon the Hammonds," Ammon Bundy told Zaitz in a phone interview from inside the headquarters. "We're planning on staying here for years, absolutely. This is not a decision we've made at the last minute."

He would not rule out the possibility of violence.

Authorities have not yet commented on the occupation but Zaitz reports that Oregon State Police, the Harney County Sheriff's Office and the FBI are involved in the developing situation.

Zaitz also reports that the group plans to seize a Bureau of Land Management fire station in the community of Frenchglen. The fire station is only used during the summer and is currently closed.

The Bundy Ranch standoff was triggered last year when the BLM tried to enforce grazing laws that Cliven Bundy was flouting. Instead of complying, Bundy allowed armed militia to set up camp for a standoff with federal authorities.

Last year, anti-government militia members descended on Cliven Bundy's property in Nevada in an armed standoff against federal authorities seeking to enforce grazing laws. Since then, they seem to have made a habit of showing up uninvited at ranches and mines in varying states to "defend" people who often don't want their help.

The latest installment of the saga is unfolding in Burns, a rural city in central Oregon, OregonLive reports. While many spent the week preparing for New Years celebrations, Cliven Bundy's son, Ammon, was making a video call to militias, directing them to spend the holiday in Oregon because ranchers Dwight and Steven Hammond are being sent to prison after setting federal property on fire.

According to media reports, the Hammonds haven't asked for the militia's help.

“Neither Ammon Bundy nor anyone within his group/organization speak for the Hammond Family,” the Hammonds’ attorney, W. Alan Schroeder wrote to Harney County Sheriff David Ward, according to local station KOIN.

Ward told a local radio station he has been receiving death threats because he refused the militia's request that he create a "sanctuary" for the Hammonds and shield them from federal custody.

“I haven’t slept a full night in close to two months now. I have a lot of anxiety,” Ward told OPB. "What we’ve been threatened with here is civil unrest and the insinuations of armed rebellion."

Cliven Bundy blames the sheriff for not protecting the Hammonds from the federal government, over which Ward has no jurisdiction.

“I believe that the local governments have failed these people,” Bundy told OPB. “The sheriff, he has the duty to protect the life, liberty and property of his citizens. And I believe he has failed, totally here.”

Militiamen scheduled a "patriot convoy" from a Safeway supermarket on Saturday to the Hammond home.

But community members were not happy. According to OregonLive, Burns residents organized a meeting with the militia members because they were worried about violence. Some hung signs bearing messages like, "Bundys go home."

"I am scared to death," Shonna McKay told the group, according to OregonLive. "Everyone here should know what your agenda is."

Dwight Hammond, Jr., 73, and his son, Steven, 46, are expected to report for their 5-year sentence in federal prison Monday, KOIN reports. According to the Associated Press, the pair set the fires to prevent the spread of invasive plants and protect their land from wildfires. But the fires they set spread to federal property. They already spent time in prison, but a federal judge ruled that the sentence was too short and thus illegal under anti-terrorism charges they were convicted for.

"I’m worried that there’s a trigger-happy idiot out there,” resident Candy Tiller told OPB.  "And maybe a law enforcement officer or somebody else makes a move that makes him think they’re pulling a gun and he’s going to shoot. It worries me. It brings me to tears. I don’t want that. I don’t want that for anybody.”

She added the group 'needs to go away."

Protesters Saturday included Ammon Bundy, Ryan Payne, an electrician from Montana who had boasted of organizing citizen sniper squads on Bundy Ranch that aimed their weapons at federal agents, and Jon Ritzheimer, an Arizona man that in November had been the subject of FBI concern because of violent rhetoric directed at Muslims.

“They can’t defend themselves, they can’t ask for help. It’s asking a sheep to all the sudden defend itself from the wolves,” a gun-toting Payne told OPB.

Regardless, Ward said he wouldn't tolerate another Bundy Ranch in Burns.

“We cannot have what happened at the Bundy Ranch here,” Ward told the station. “I won’t allow it from law enforcement and I won’t have it from citizens.”

Watch video from the protest, via the Oregonian, here: