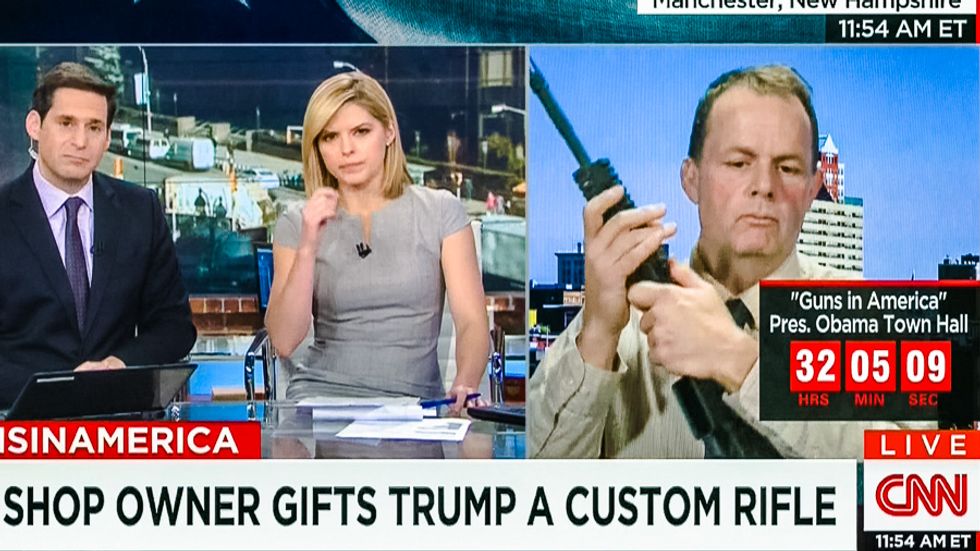 A gun shop owner from New Hampshire who supports Donald Trump for president held an AR-15 during his interview with CNN on Wednesday.

Black Op Arms owner Mark Limoges showed up for his interview with CNN sporting a special edition AR-15 like one that the company had recently presented to Trump.

For the remainder of the five minute interview, Limoges continued to hold the weapon across his chest, pointing it upwards.

"We've been big Trump supporters," the gun store owner declared. "And wanted to do something to commemorate Mr. Trump's visit."

Limoges noted, however, that Trump's Secret Service detail was concerned about the gift.

"We actually wanted Mr. Trump to come to our gun store, which the Secret Service was not real thrilled about," he recalled. "A Secret Service agent came to the store, took the gun. We removed the bolt out of it. They took possession of the weapon and then presented it to us before we went into the room to present it to Mr. Trump."

Limoges noted that the weapon would need to be modified to comply with New York's assault weapons law before Trump could bring it home.

When it came to President Barack Obama's executive action on background checks, Limoges suggested that it was part of a plot to take away guns from Americans.

"I think it's probably a first step towards it, yes," Limoges opined.

"The president said yesterday in his speech that his actions are not a plot to take away everybody's guns," co-host Kate Bolduan pointed out.

"Mr. Obama has also said other things that have not always been the truth," Limoges insisted.

"Look, he says he respects the Second Amendment," Berman advised. "And if you just look at the actions he's taking, even the things he was proposing a few years ago which were steeper than this, even if you support universal background checks, that doesn't necessarily mean you want to take someone's guns away."

Limoges eventually agreed that Obama would "probably not totally" ban all guns.

"Most of the people that come in [to the gun store] are real nervous about what Mr. Obama is going to do to limit their chances of getting weapons," he said.