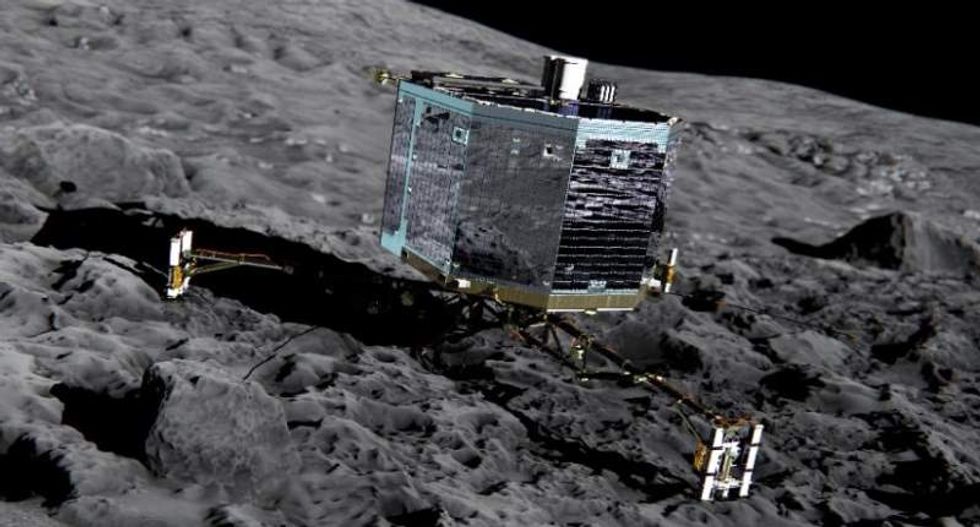 Scientists initiated Friday a last-chance maneuver to contact a long-silent robot-lab dropped more than a year ago onto the surface of a comet hurtling through our solar system.

Part of the European Space Agency's Rosetta mission, the Philae probe has yielded spectacular scientific results -- and a few moments of high drama -- since its near crash-landing onto comet 67P/Churyumov-Gerasimenko in November 2014.

But it has been six months since mission control engineers at the German Aerospace Center in Darmstadt have been in communication with Philae, and the odds of reestablishing contact are diminishing fast as the solar-powered probe speeds away from the Sun.

"The last clear sign of life was received from Philae on July 9, 2015," the German Space Agency said in a statement. "Since then it has remained silent."

Scientists sent a command to the fridge-sized robot to spin up its flywheel, initially used to stabilize the probe when it landed.

The hope is that so doing will "shake dust from its solar panels and better align it with the Sun", explained technical project manager Koen Geurts.

It is also possible, however, that the command -- routed through the Rosetta spacecraft orbiting the comet -- will never even reach Philae.

Several further attempts will be made, he added.

"It's an admittedly desperate move," Philippe Gaudon of the French National Space Agency told AFP. "It is very unlikely the robot will become functional again."

Mission managers believe that one of the lander's two radio transmitters, and one of its two receivers, have both failed. Even the remaining ones may not be fully functional.

The window of opportunity for making contact with Philae will close definitively toward the end of January, when the comet and its companion hardware will be some 300 million kilometers (185 million miles) from the Sun.

That's when the temperature is likely to fall below minus 51 degrees Celsius (minus 60 degrees Fahrenheit), the threshold beyond which Philae can no longer operate.

The robot-probe -- packed with nearly a dozen instruments -- landed on 67P after a 10-year, 6.5-billion-kilometre journey piggybacking on mothership Rosetta.

It bounced several times on the craggy surface before ending up at an angle in deep shade, where it sent home some 60 hours of data before going into standby mode on November 15, 2014.

The lander's power pack was recharged as 67P drew closer to the Sun on its elliptical orbit, and Philae woke up on June 13.

After that, it made intermittent contact, uploading data, only to fall silent again on July 9.

The ground-breaking mission was conceived to learn more about the origins of life on Earth.

Comets are pristine leftovers from the Solar System's formation some 4.6 billion years ago. Many experts believe they smashed into our infant planet, providing it with water and the chemical building blocks for life.

Philae has found several organic molecules, including four never before detected on a comet.