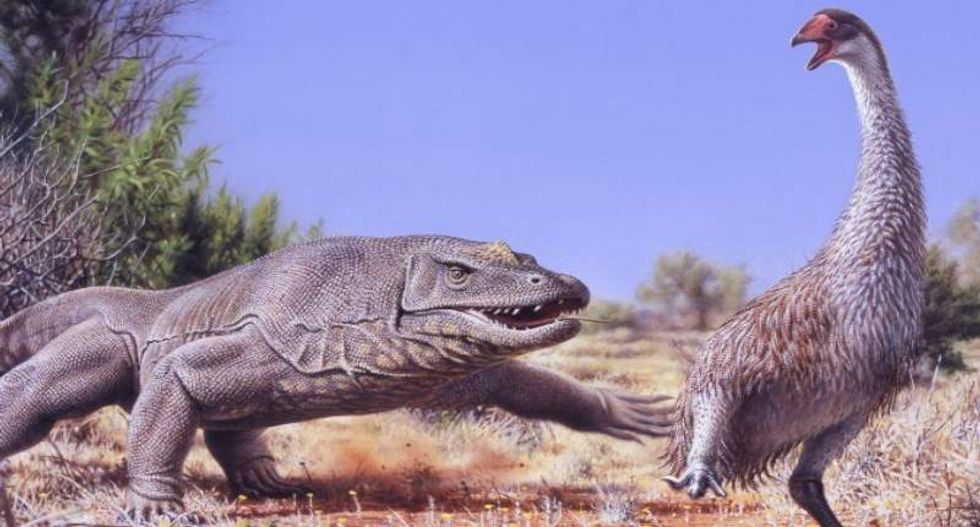 The mystery behind the extinction of a huge flightless bird called Genyornis that flourished in the grasslands and woodlands of prehistoric Australia may have been solved, with burned eggshells as the clue and people as the culprits.

Scientists said on Friday burn patterns detected on eggshell fragments indicate that the humans who first arrived in Australia roughly 50,000 years ago gathered and cooked the big bird's eggs, playing havoc with its reproductive success.

The study is the first to provide direct evidence that these early human inhabitants preyed on the remarkable large animals that once thrived in Australia but disappeared after people got there, University of Colorado geological sciences professor Gifford Miller said.

Genyornis, at almost 7 feet tall (2 meters) and perhaps 500 pounds (225 kg), was much bigger than today's large flightless birds like the ostrich or emu. It possessed powerful legs, small wings, large claws and a big beak for eating fruit, nuts and maybe small prey.

It was a member of a family of giant birds called dromornithids, some reaching 10 feet (3 meters) tall and 1,100 pounds (500 kg), that was related to ducks, geese and swans. Genyornis vanished around 47,500 years ago, Miller said.

The researchers analyzed burned Genyornis eggshell fragments, some only partially blackened, discovered at more than 200 sites. The eggs were the size of a cantaloupe, weighing about 3-1/2 pounds (1.5 kg).

"We conclude that the only explanation is that humans harvested the giant eggs, built a fire and cooked them, which would not blacken them, then discarded the fragments in and around their fire as they ate the contents," Miller said.

"Wild or natural fires could not produce such patterns. We have no direct evidence that humans hunted the adults, but loss of eggs certainly reduced reproductive success."

There has been a long-running debate over whether people caused the extinction of Australia's unique collection of large animals, also including a 25-feet-long (7.5 meters) monitor lizard called Megalania, a nearly rhinoceros-sized wombat called Diprotodon, large marsupial predators and 1,000-pound (450-kg) kangaroos.

Some experts blame human hunting, while others blame climate shifts, in particular continental drying from about 60,000 to 40,000 years ago. With the new study, published in the journal Nature Communications, the case for a human role becomes stronger, Miller said.