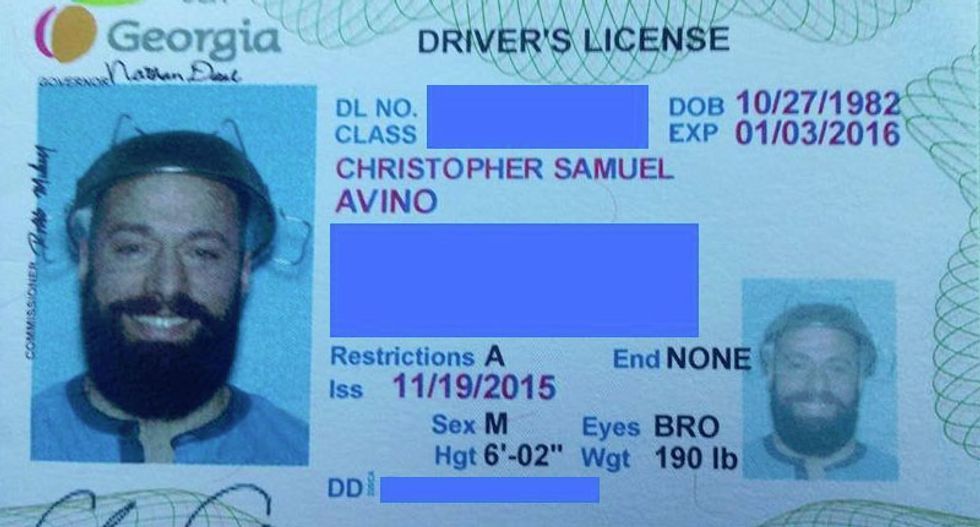 A so-called "Pastafarian" who claims to worship the "Flying Spaghetti Monster" is fighting Georgia officials for the right to wear a spaghetti colander in his official driver's license photo.

Chris Avino said the state's decision to bar him from wearing the religious headgear violated his First Amendment rights -- and on Twitter he suggests he's preparing legal action against the state.

The state initially allowed Avino to wear a colander on his head for a temporary driver's license photo, the Atlanta Journal-Constitution explained, but officials recently decided that he would need to take a new photo -- without the colander.

Angelique McClendon, the top lawyer for the Georgia Department of Driver Services, said in a letter to Avino that the state allows people to wear a veil, scarf, or headdress in their driver's license photo. But "a colander is not a veil, scarf or headdress," she said. "A colander is a kitchen utensil commonly used for 'washing or draining food.'"

The state "does not deem it appropriate to allow customers to be issued identification cards of licenses that portray satirical or offensive points of view," McClendon added, describing Pastafarianism as "not a religion" but instead a "philosophy that mocks religion."

But Avino is refusing to back down.

Pastafarianism and its deity the Flying Spaghetti Monster were spawned in 2005, when Bobby Henderson mocked the Kansas Board of Education for allowing the teaching of Intelligent Design, a variation of creationism, in public schools. Since then, Pastafarians from around the world have won the right to wear a colander on their head in their driver’s license photos.

Avino insisted that he took Pastafarianism seriously, and did not consider his headwear to be a form of satire.

Avino said the state of Georgia had no right to judge whether his choice of religion was valid or not.

"Our religion exists," he concluded. "It is legitimate. Its claims are no less valid than the claims of other recognized religions. I am in no way breaking the law or breaking any rules by wearing my religion's headdress, a colander, during my driver's license photo. But DDS is. DDS is infringing on my 1st amendment right to express my religious beliefs freely within the laws of the United States of America, within the laws of the state of Georgia, and within the rules of the DDS."