Trevor Noah: Palin's bonkers speech at Trump rally was like a bag of Scrabble tiles came to life 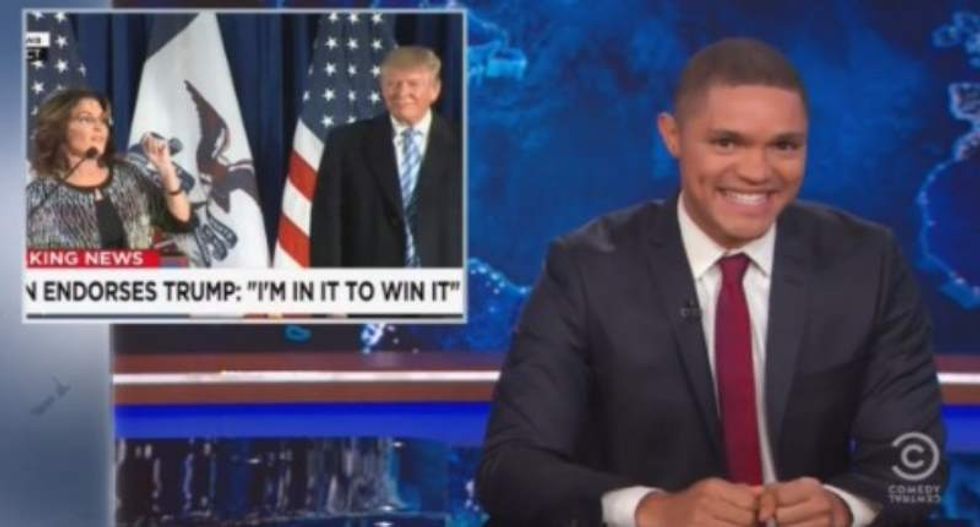 While his Daily Show colleagues tried to warn him about Sarah Palin, Trevor Noah looked gleeful on Wednesday after watching her ringing, rambling endorsement of Donald Trump.

"The only thing Sarah Palin hates more than [Barack] Obama is punctuation," Noah marveled. "Nobody talks like that. It's almost like she's a malfunctioning robot. It's like a bag of Scrabble tiles that grew a body and came to life."

Noah was quick to endorse Palin's endorsement, describing her moment back on the national stage as a riposte to American stereotypes about Africans.

"You know how Americans loved all those African characters in movies like The Gods Must Be Crazy and Coming to America?" he asked. "Everyone's like, 'All those funny sounds that come out of their mouths.' And now, as Africans, we're watching this. There's people in Africa right now watching this. She just talks, and it never ends."

Noah also revealed that he got a crash course in "the legend of Sarah Palin" from his correspondents.

"For months she roamed the real American countryside, destroying the rules of politics and grammar," Williams said. "Chanting things like, 'Hopey-Changey' and 'drill, baby drill' and 'lipstick on a pig.'"

Watch Noah's commentary, as posted by Crooks and Liars on Wednesday, below.