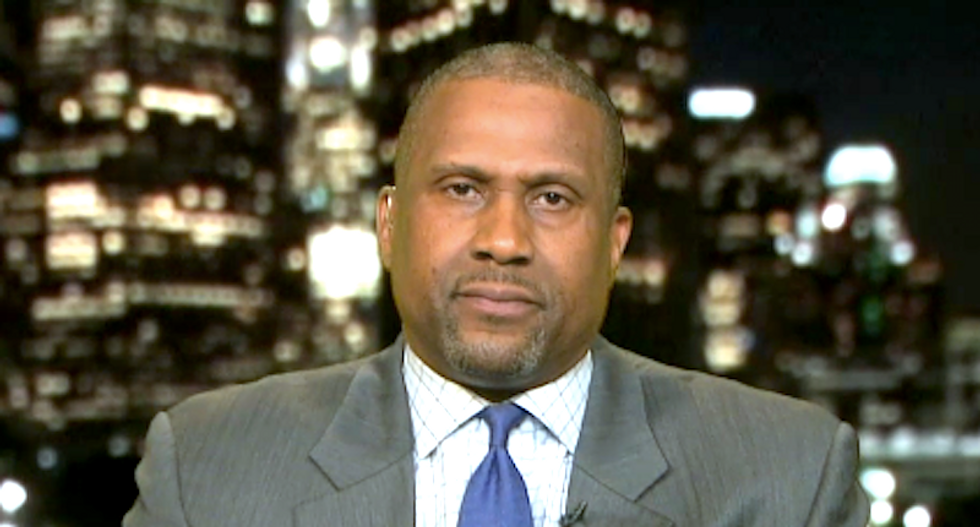 Tavis Smiley, author and public television talk show host, hit back at Donald Trump for calling him a racist, noting that the GOP presidential candidate had failed to condemn the white supremacists who support his 2016 campaign.

The host of Tavis Talks on PBS went on the ABC talk show This Week and said Trump is an "unrepentant, irascible religious and racial arsonist" for his comments calling undocumented immigrants criminals and calling for a ban on Muslims entering the country. In response, Trump tweeted that Smiley is a "hater & racist."

When asked about his comment by CNN host Don Lemon on Monday night, Smiley repeated it and also said the news media is asking the wrong questions when it comes to Trump's prominence among American voters.

"What troubles me quite frankly is that we keep talking about... Trump rising in the polls as if somehow this is happening miraculously," Smiley said." It's happening in part because, as your lead-in shows with these now white supremacists supporting him -- it's happening because he's appealing to a certain base voter in this country. He's appealing to the dark side, the night side of America and that's why he's rising in the polls. And we ought not cover him without condemning him for doing that."

"First of all, for a guy with a Wharton degree, he's got to do better than 'hater and racist,'" Smiley said. "Can we just remove the word 'hater' from our lexicon?"

He then questioned how Trump could conclude that Smiley was a racist after failing to condemn a white supremacist group for making campaign robocalls for his campaign.

"I'm on your program tonight because I made a comment about Donald Trump yesterday on a morning show," Smiley said. "And within a matter of hours, Donald Trump had tweeted about me... So if that story broke over the weekend about this white supremacist -- again, he can't be responsible for who is supporting him. But how can he get around to calling me a racist and a hater in less than 24 hours, but since the weekend he hasn't gotten around to condemning a white supremacist for supporting his campaign."

He then pointed out that "nobody in the media is asking these questions."