US immigrant raids alarm Central American nations: 'Here, there are no sources of work' 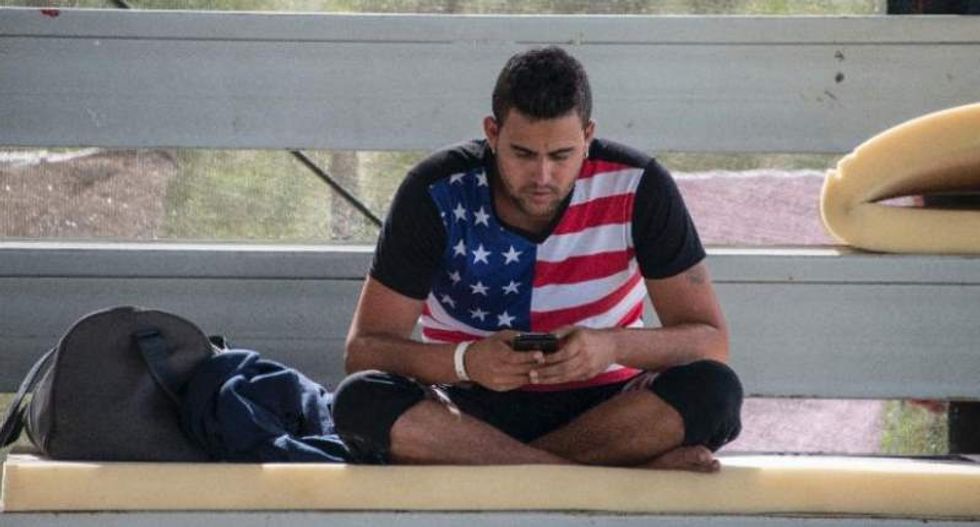 A man rests at a shelter where of a group of Cuban migrants are staying in La Cruz, Guanacaste, Costa Rica on Nov. 26, 2015 (AFP/Ezequiel Becerra)

Central American nations Wednesday received some of the first groups of their citizens deported under tough new raids in the United States against illegal immigrants carried out by President Barack Obama's administration.

In Guatemala, four mothers and 10 children aged two to 17 sent back walked off a plane that had arrived at a military airbase on the outskirts of the capital.

They refused to speak to reporters, with some using sweaters to hide their faces, and authorities took them away, out of sight.

One old man outside the base waiting for his niece and her two children in the group, Alfredo Vicente, told AFP about how US immigration officials had knocked at her door in Atlanta asking for her and then arrested her.

She had gone to America two years ago after being unable to find work as a teacher, he said, adding that she and her family were indigenous Guatemalans.

"Here, there are no sources of work and we are asking them not to deport people. They were there working decently," he said.

US officials last weekend began the raids that American media reported were to spread nationwide in an unprecedented operation to rid the country of immigrants with court-issued deportation orders against them.

The action comes at a politically sensitive time in the United States, which is in feverish campaign mode ahead of a November election to choose a successor to Obama, who is finishing his last term.

Immigration is one of the hot-button issues, with candidates from the opposition Republican party arguing that more should be done to bar to undocumented migrants -- especially from Latin America and war-ravaged Syria -- from coming to their country.

Donald Trump, a leading wealthy Republican, has been especially vehement on the topic, putting Obama's ruling Democrats under pressure to show they are not weak on immigration.

According to the US secretary for Homeland Security, Jeh Johnson, 121 adult and child illegal immigrants were rounded up last weekend for deportation, and more would soon be apprehended.

Many of the Latinos targeted are from Central America, fleeing rampant violence, corruption and poverty that grip Guatemala, El Salvador and Honduras.

The three countries, collectively known as the Northern Triangle, have some of the highest murder rates in the world.

Preliminary figures from police recorded 17,422 homicides in those three countries last year, an 11 percent rise over 2014.

The statistics showed El Salvador as the nation with the highest murder rate in the world: 104 violent deaths per 100,000 inhabitants.

By way of comparison, America's homicide rate is around four per 100,000.

El Salvador's government on Sunday issued tips to its nationals in the US, telling them that immigration agents have to present an order signed by a judge to enter their homes.

"If you are detained by an immigration agent, remain calm," it said in a statement.

"If you have immigration papers, present them. If not, ask immediately to contact your attorney or the nearest consulate of El Salvador."

In Guatemala, the head of the state CONAMIGUA agency tasked with helping returned citizens, Alejandra Gordillo, said she believed the US operation would bring the level of deportations up to levels seen in years past.

Those forced returns hit a record high for Guatemala in 2014, with 51,157 deportees. Last year, the number slumped by 39 percent.

For the other two Northern Triangle countries, it was a similar picture of sharp decreases in deportations in 2015. El Salvador recorded a 25 percent drop to 21,752 returnees, while Honduras saw 19,000 of its citizens deported, around half the figure from 2014.

"We're worried about the deportations because, beyond the human drama it causes, there is a difficulty due to adult unemployment," said Marisol Garcia, who monitors migration issues at the Human Rights Institute of the University of Central America.

For young people and families forced back to their homelands, there was also the "exposure to an environment of insecurity that they had fled."

Obama's government has sought to help the Northern Triangle address those issues by this year allocating $750 million to improving security and prosperity in the three countries. But whatever results that aid could bring about is years in the future.

In the meantime, the stepped-up US focus on deportations could have an immediate deleterious effect on the countries economies, which rely to a big extent on remittances from Central Americans living and working in America.

In Guatemala, for instance, they amount to $10 billion annually, equivalent to half of the country's export earnings. In El Salvador, emigrants send back $4.2 billion per year, or 17 percent of gross domestic product. In Honduras, remittances total more than $3 billion.

"There are a significant number of people working over there.... It's clear that this (deporting them) will have a significant effect," said Aracely Romero, head of Honduras' CAMR center for returnees.

According to Guatemala's CONAMIGUA, before the new US operation, typically 85 percent of those deported had been caught trying to clandestinely cross over the border into America.

But the raids on homes could change that. "We estimate around 60 percent of the deportees will be those intercepted at the border and the rest will be people living in the United States who are from family units given short-term permission to remain," Gordillo said.