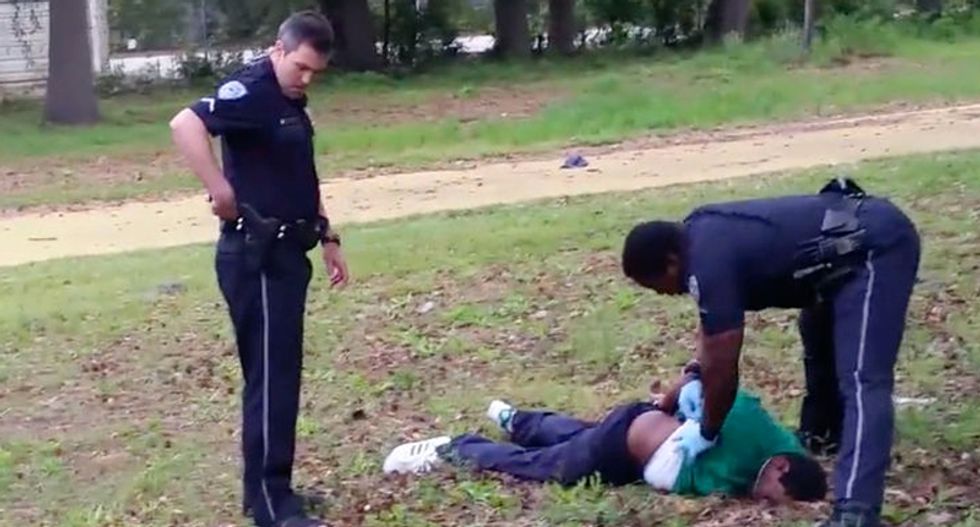 In all of 2011, British police killed 2 people. In 2012, 1 person. In 2013, a total of 3 bullets left the barrels of British police guns, and no one was killed. In the last two years, a total of 4 people have lost their lives because of British cops, bringing the total number of citizens killed in the UK to 7 in the last 5 years.

Since Christmas, police in America have killed 14 people. In 1 week, American cops have killed twice as many people as the British police have killed since 2011!

But if we zoom out just a little further, those numbers become even more shocking. Since 1990, police officers in the United Kingdom have killed exactly 58 people.

Since the 14th of December, police in America have killed 60 citizens — It took English cops 25 years to do what American cops have done in the last two weeks of December.

On average, British police kill around two citizens a year. American cops kill more than that every day.

Of course, all those killed were not innocent, but many were unarmed, shot while running away, and their deaths recorded on video. And all of them deserved due process.

Some will say that since the US is much larger in population than the UK, that is why American cops kill more. But this is a farce.

To expose this farce, we can compare the US with communist China.

China, whose population is 4 and 1/2 times the size of the United States, recorded 12 killings by law enforcement officers in 2014.

So why are police in the US so much more likely to kill than all of these other first world countries?

To better understand the multi-dimensional answer to that question, we can start by looking at the prison population of the US.

America imprisons almost twenty-five percent of all people imprisoned in the world, although containing only about 5% of the world’s population.

The U.S. houses 2.3 million inmates, the majority of whom are in for drug offenses.

Locking up drug users has proven to be quite a profitable venture.

It is much easier to walk out on the street corner and shakedown a teenager who may have an illegal plant in his pocket than it is to examine the evidence in a rape or murder case. The so-called “Private” Prisons know this and have subsequently found their niche in the immoral war on drugs.

The term Private Prison is a farce from the get-go too.

A real private prison would not be solely funded by taxpayer dollars. These Private prisons are nothing more than a fascist mixture of state and corporate, completely dependent upon the extortion factor of the state, i.e., taxation, as a means of their corporate sustenance.

A truly Private prison would have a negative incentive to boost its population for the simple fact that it is particularly expensive to house inmates. On the contrary, these fascist, or more aptly, corporatist prisons contractually require occupancy rates of 95%-100%.

The requirement for a 95% occupancy rate creates a de facto demand for criminals. Think about that for a second; a need or demand for people to commit crimes is created by this corporatist arrangement. The implications associated with demanding people commit crimes are horrifying — and deadly.

Creating a completely immoral demand for “criminals” leads to the situation in which we find ourselves today. People, who are otherwise entirely innocent, are labeled as criminals for their personal choices and thrown in cages or killed.

As a result, police in America have become a standing army and the citizens have become — the enemy.

The war on drugs has been exposed for creating a nearly exponential increase in crime and overdose deaths. It does nothing to curtail drug use and it has only served to turn America into a freedom-hating, deadly police state.

When so many people are tasked with finding and prosecuting those in possession of a substance deemed illegal, police interactions become more frequent and less cordial. If we end that, we get the state out of the private lives of most individuals. This will only serve to lessen the scope of police harassment, in turn diminishing the instance of brutality and killings.

The good news is that even cops are figuring this out. In fact, a record number of law enforcement personnel are quitting their jobs and joining the push to end the drug war.

The state’s immoral and deadly war on its citizens is crumbling. But during this process, however, the vilest of its enforcers are doing everything they can to keep it going — because they become irrelevant once it ends.

“The war on drugs employs millions – politicians, bureaucrats, policemen, and now the military – that probably couldn’t find a place for their dubious talents in a free market, unless they were to sell pencils from a tin cup on street corners.” -L. Neil Smith

(This story originally appeared at The Free Thought Project)