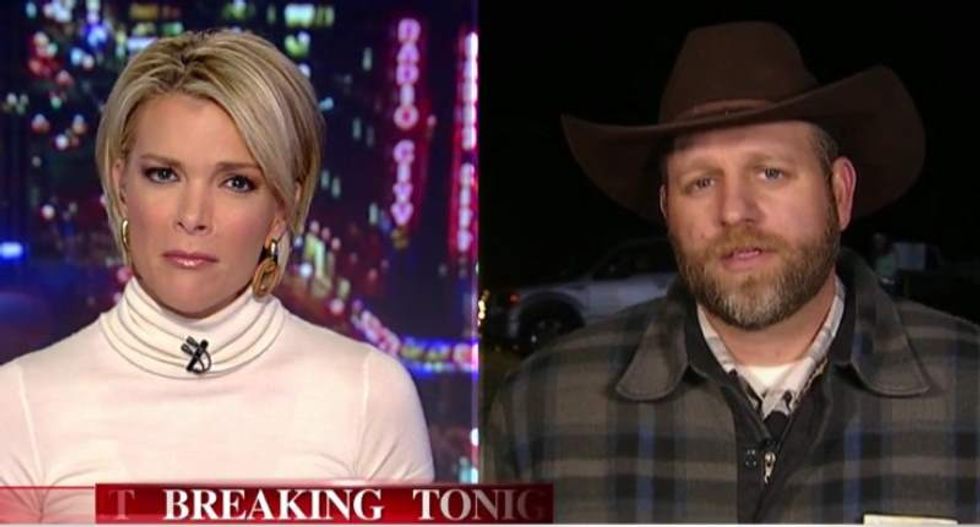 Oregon militant leader Ammon Bundy was flustered in his attempt on Monday night to draw Fox News host Megyn Kelly into an argument regarding the ranchers he has claimed to be supporting.

"You know the argument on the other side," she said. "These ranchers -- who you support but are not directly involved [with] -- had their day in court. They were found guilty, and it went all the way up to the US Supreme Court, which denied their appeal. Isn't that the way it's supposed to work in our country when it comes to the rule of law?"

"Yeah, well let me ask you -- and I'm sure you know the answer -- who was the plaintiff?" Bundy responded.

But instead of taking the bait, Kelly prompted him, "keep going." When he repeated the question, Kelly told him, "I'm waiting for you to make your point. Generally I don't answer the questions on my show; I ask them."

"Oh," Bundy said, before suggesting that because the plaintiffs and prosecutors were representing the federal government, he did not recognize the verdict against Dwight and Steven Hammond. The Hammonds, who have distanced themselves from Bundy and his group, turned themselves in to authorities on Monday.

Bundy later claimed that his brother Ryan was taken out of context when the Oregonian newspaper quoted him as saying he was willing to "kill or be killed" after leading the seizure of a federal facility in Harney County.

"I've already talked to my brother about that," Ammon Bundy said. "No, i wouldn't agree with it, because it wasn't his statement."

However, he did not explain what he felt Ryan Bundy was really trying to say at the time.