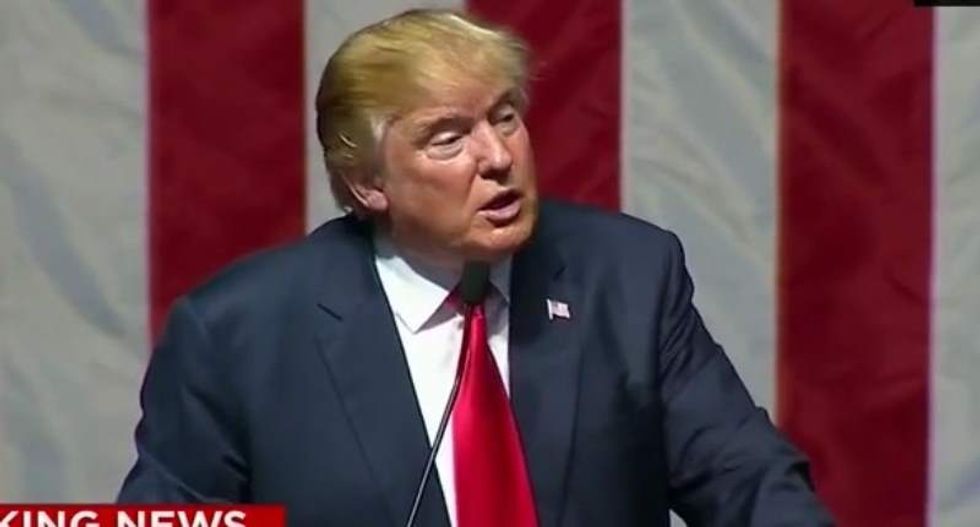 Republican presidential candidate Donald Trump said Wednesday night that it was fair for Sarah Palin to link the arrest of her son to President Barack Obama.

During an interview with CNN host Don Lemon, Trump said he told Palin she should talk about her 26-year-old son, who was arrested Monday night in Alaska after his girlfriend said he punched her in the head.

Trump said he thought it would be appropriate for Palin to address the incident.

"There was tremendous press and I think it's something that's very important to discuss not even for her son, but for so many other sons and daughters that are coming back from the Middle East where they have, you know, traumatic problems, they have tremendous problems and I told her," he explained. "I actually suggested. I think I said I think it would be a great forum. And I know, she started the dialogue.

"I think it's a very important dialogue. Because she told me that they're coming back, so many are coming back and they are, you know, they're under tremendous pressure and tremendous strain. There's no question about it."

"Do you think it's fair to link the president with her son's issues?" Lemon asked.

"Oh, I think so," Trump responded. "Look, you know, everything starts at the top and he's the president. And I think you can certainly do that. From what I understand, they just -- and all you have to do is look at the Veteran's Administration, look at the bad, the horrible care our vets get."

"One of the many things I'm going to do is I'm going to straighten that mess out. You take a look at the Phoenix Veterans Administration in Phoenix, Arizona. It's a disgrace. It's a cesspool. It's dishonest. It's corrupt in every way, it's incompetent."

"But more I think frankly, I think it's more dishonest than incompetent," Trump continued. "But you look at this is true all over the country. And I think it's a good thing and you have to say ultimately, it's the president's charge, it's the president's responsibility. He has to make sure that Veterans Administration works, but it doesn't. Our vets are being treated horribly."

(The remarks about Sarah Palin's son start around the 19 minute mark.)