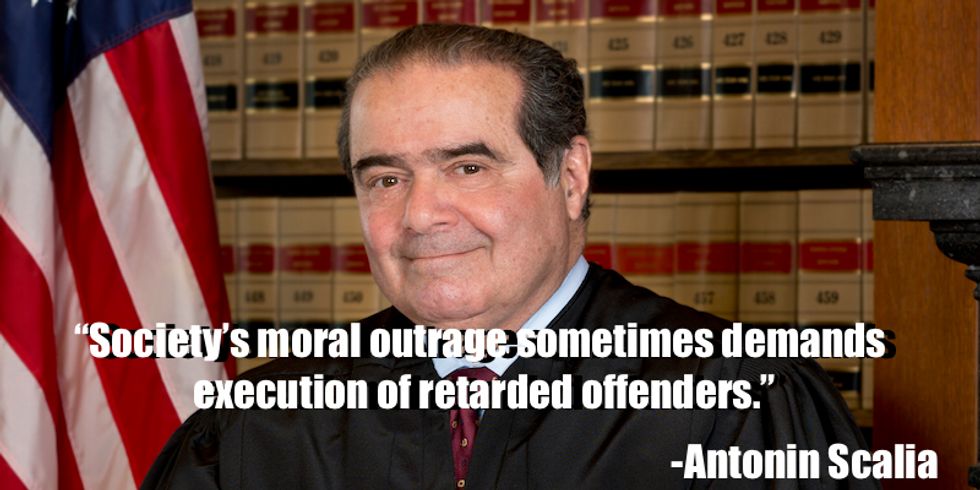 Conservative Supreme Court justice Antonin Scalia, who spent decades warning the nation about the flagpole-sitting nature of homosexuality, died of natural causes on Friday at a luxury resort in Texas. He was 79.

Death is always sad. I feel bad for his family. And it's not time to talk about politics. (Unless you're a Republican who really wants to honor Scalia's memory by using his death to push for a totally unheard of postponement of his replacement so it happens after Obama leaves office.)

But it might be time to memorialize the man through rounding up some of the most memorable things he ever said or wrote.

1.Homosexuality: It's a lot like murder!  Romer v. Evans challenged a Colorado amendment which banned outlawing anti-gay discrimination (I know, I have a headache, too) in 1993. Justice Scalia expressed his sympathy for the people of Colorado, who wanted nothing more than to protect themselves from gay sex like they would from murder:

The Court’s opinion contains... hints that Coloradans have been guilty of ‘animus’ or ‘animosity’ toward homosexuality, as though that has been established as Unamerican. . . . I had thought that one could consider certain conduct reprehensible–murder, for example, or polygamy, or cruelty to animals–and could exhibit even ‘animus’ toward such conduct.

2. Homosexuality: it's a lot  like incest! The Supreme Court struck down a Texas ban on sodomy in 2003 in Lawrence v. Texas. Amazingly, Scalia's murder comparison had not convinced his colleagues of the danger posed by the gays. So he tried again. Only this time, with a different analogy.

States continue to prosecute all sorts of crimes by adults “in matters pertaining to sex”: prostitution, adult incest, adultery, obscenity, and child pornography

3. Homosexuality: it's a lot like flagpole sitting! To his credit, Scalia would try, time and time again, to use the power of simile to enlighten his colleagues. Within the same dissent, he pointed out that not everything was a right just because it had once been illegal. The act he chose to use to demonstrate is a great American pastime:

The Supreme Court of the United States has descended from the disciplined legal reasoning of John Marshall and Joseph Story to the mystical aphorisms of the fortune cookie.

5. Legalizing same-sex marriage: nothing more than pretentious, egomaniacal 'fortune cookie justice.' In the same dissent, he described the majority opinion as being,

couched in a style that is as pretentious as its content is egotistic.

6. ladies: not protected by the Constitution. Scalia didn't limit himself to reactionary ideologies based on sexual orientation. Ironically, his bigotry embraced the diversity and equality that, he claimed, the Constitution lacked. During a 2011 interview with California Lawyer, Scalia said,

7. Women: can't live with em, can't stand having to sit on The Supreme Court with them because they're hysterical, shrieking, fetus-viability redefining banshees. Sandra Day O'Connor had already made the mistake of becoming the first woman on the United States Supreme Court. Then, adding insult to injury, she refused to join Scalia's effort to overturn Roe v. Wade in Webster v. Reproductive Health Services, 1989. Always a gentleman, Scalia offered O'Conner some subtle and respectful constructive criticism, describing her reasoning as

"irrational," and not to "be taken seriously."

There are those who contend that it does not benefit African Americans to get them into the University of Texas, where they do not do well, as opposed to having them go to a less-advanced school, a slower-track school where they do well. One of the briefs pointed out that most of the black scientists in this country don't come from schools like the University of Texas. They come from lesser schools where they do not feel that they're being pushed ahead in classes that are too fast for them.

9. Mexicans: Tequila-drinkers. When an attorney argued that his client didn't have to be deported because he was already on parole, Scalia responded,

No one thinks your client is abstaining from tequila for fear of being deported. This is an ingenious exercise of the conceivable.

10. Voting rights: the result of peer pressure and popularity contests. During the oral arguments in Shelby County v. Holder, 2013, Scalia referred to voting rights as "perpetual racial entitlements," the passage of which is,

very likely attributable, to a phenomenon that is called perpetuation of racial entitlement. It’s been written about. Whenever a society adopts racial entitlements, it is very difficult to get out of them through the normal political processes.

I don't think there is anything to be gained by any Senator to vote against continuation of this act.

11. Executing intellectually disabled people: kosher. Interestingly, when it came to the death penalty, Scalia wasn't as critical of  the kind of group think that tricks people into supporting voting rights. In his dissent in Atkins v. Virginia, 2002, which barred executing people with mental disabilities, Scalia defended sentencing retarded people to death because everyone is doing it!

12.  Executing innocent people: also kosher. Scalia he went so far as to argue that executing the innocent didn't even violate the Constitution:

[t]his court has never held that the Constitution forbids the execution of a convicted defendant who has had a full and fair trial but is later able to convince a habeas court that he is ‘actually’ innocent.

So, if you're feeling conflicted about Scalia's death, don't lose too much sleep over it. You probably feel guiltier over his natural death, than he ever did about the government-sanctioned killing he so enthusiastically supported.