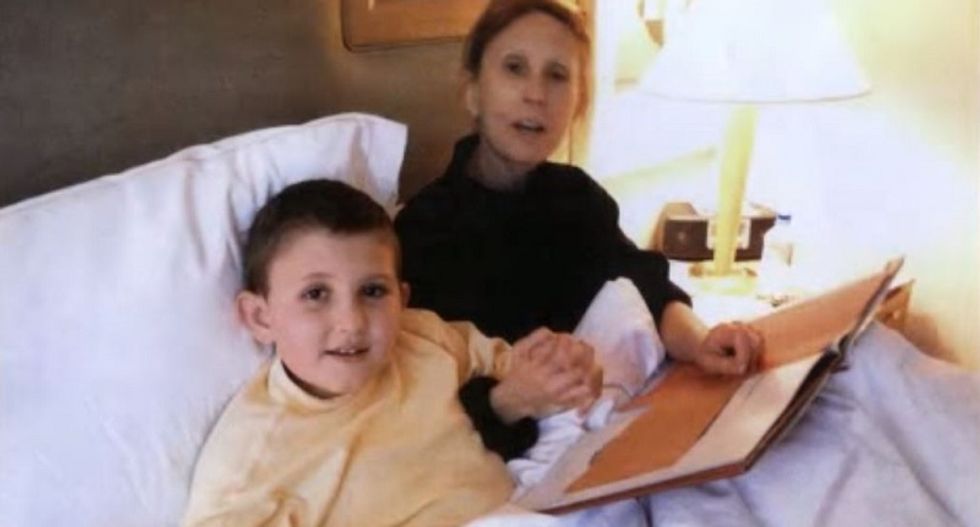 In May, New York millionaire Gigi Jordan was sentenced to 18 years in prison for crushing a lethal dose of Ambien and Xanax into a cocktail of juice and vodka and forcing her 8-year-old autistic son, Jude Mirra, to drink it with a syringe while holed up in a luxury hotel room.

Now, an activist is questioning whether Jordan's horrific act was influenced by a shady and bizarre brand of psychology focused on a conspiratorial idea that Satanists and witches are conducting rituals in which children are sexually assaulted and tortured. Jordan spoke to at least one such psychologist before murdering her child in 2010 while laboring under the belief he was being sexually tortured in Satanic rituals.

"They always used to accuse [critics] of being Satanists," Satanic Temple spokesman Lucien Greaves said in an interview with The Raw Story. "It's really hard to do that with me and expect a reaction."

Greaves, who co-founded the non-theistic, activist organization whose tenets resemble those of humanism, believes he is uniquely-positioned to put an end to what he calls harmful pseudoscience that in the 1980s drove modern-day witch hunts known as the Satanic Panic. While in the '80s, belief in ritual abuse led to innocent people serving long prison terms, Greaves believes in 2010 it helped pave the way for Gigi Jordan to murder Jude.

The case drew his attention because it so happens that he has a long-standing history of countering so-called ritual abuse therapists, who push the belief Satanic cults and witches conspire to horrifically abuse children, resulting in buried memories, which can only be accessed by such therapists. According to Greaves, who has been researching the issue for years, these are false memories -- but they result in real psychological trauma and isolation. Ritual abuse and alien abduction are common themes of these memories retrieved via sham therapy sessions.

Through his work, Greaves has become an ally to people known as "retractors" -- or people who were made to believe they had been tortured in bizarre ways but then come to realize these memories were planted through suggestion by therapists.

News reports and court records about Jordan seem to illustrate a deeply disturbed, delusional mother who believed a complex, winding conspiracy between her two ex-husbands to both defraud her of large sums of money and horrifically, sexually abuse her son. In the end, Jordan maintains she killed Jude because she thought it was the only way to protect him from the ongoing abuse -- abuse she believed caused his autism symptoms.  Both men adamantly denied the accusations. Neither has been charged with a crime.

"I wanted him to be safe and at peace at any cost," Jordan said in an interview with CBS New York.

One of Jude's therapists, Carol Crow, testified that Jude, who was very limited in communication and motor skills due to his condition, began typing out detailed accusations on Jordan's Blackberry while Jordan held his arm. The alleged abuse included being forced to drink blood, kill animals and have sex with relatives and babysitters. Crow also testified that Jude had developed multiple personalities, the New York Post reports.

“He’d introduce which personality was talking when he was typing,” Crow testified, according to the Post. “There’d be a conversation where ‘Killer’ said, ‘I’m crazy now, he made me nuts.’ And ‘Eiken’ chimes in and says, ‘I’m going to kill him one day.’ That was pretty typical with him.”

Crow was "communicating" with Jude using a discredited method known as "facilitated communication," in which a "facilitator" supports the limb of a disabled person, allowing them to type on a keyboard. Studies have shown this produces an "Ouja board effect" in which the facilitator unconsciously guides the typing.

A second therapist sought out by Jordan claims to specialize  in "ritual abuse" by Satanists and witches.

Ellen Lacter, a board-licensed psychologist out of California, specializes in abuse by way of "intra-familial satanic and abusive witchcraft cults [which] reliably causes dissociation. Children in these cults are programmed to the extent that the cult’s leaders understand mind control programming."

Dissociation” refers to what used to be known as multiple personality disorder – a controversial psychiatric diagnosis that Greaves called discredited.

Lacter declined to comment, saying only, "Neither Ms. Jordan nor her son was ever my patient. I have never met either of them. Ms. Jordan contacted me requesting information and referrals. When people contact me for information or referrals, I hold their communication with me as confidential aside from legal mandates that over-ride confidentiality."

Lacter did file a suspected child abuse report, according to Newsweek. In one of the reports, presented as a court exhibit, a document provided to the Raw Story by Greaves, Lacter wrote that in February of 2008, "Ms. Jordan first contacted me, having found me through my website on abuse (www.endritualabuse.org), concerned that ritual abuse might explain her son’s behaviors and the disclosures he had begun to make, Jude’s behaviors and disclosures, reported by Ms. Jordan, were consistent with that of other victims of ritual abuse. Ms, Jordan retained me to provide her with consultation to help her to keep her son safe and to help him psychologically."

Lacter's professional website contains information about political and criminal organizations engaging in mind control and also details what she believes to be locations where witches sexually torture and sacrifice children in occult rituals. It also contains instructions under "Books" for ordering a work entitled, Thanks for the Memories, The Truth Has Set Me Free.

In that book, Greaves says author Brice Taylor talks about obviously deluded "recovered memories" of being a "sex slave" to famous people like Bob Hope and Ronald Reagan, whom she claims had a penchant for dolphin pornography.

The fact that Jordan was mentally ill seemed apparent to a child sex exploitation detective in Wyoming who had her involuntarily hospitalized for psychiatric evaluation before she consulted Lacter, according to CBS News. Jordan wrote a series of letters to the detective claiming her son was being violently, sexually abused by a cult. But investigators found no evidence of abuse, and Jude was taken into protective custody while Jordan was hospitalized.

It "was apparent she was mentally ill" to law enforcement at the time.

Greaves believes the case should prompt the professional psychology community to reject these types of psychology practices so that mentally fragile people don't fall under their influence.

"If [Jordan] had found competent, proper mental health care, this would have never happened," Greaves said. "I think that's arguably very much true. The fact that she can find people with these kinds of professional credentials to give legitimacy to these ideas she held... It really is a scandal."

He criticized what he called a "fringe conspiracist movement" in the field of mental health care, outlining an outlandish conference he attended in 2009 for the group, Stop Mind-control And Ritual abuse Today, where he says psychologists like Lacter are regulars.

" S.M.A.R.T. conferences discus such pressing current mental health issues as  dissociative disorders brought on by Freemason, Illuminati, and Satanist ritual  abuse activities,  as well as government mind ­control plots," he wrote. "When I attended a S.M.A.R.T. conference in 2009, I noted a sales booth offering a 'more advanced species of tinfoil hat,' baseball caps lined with a metallic fiber weave meant to block electromagnetic transmissions. I also observed a speaker by the name of 'Royal,' at all of about forty years of age, claim that she was a personal slave to Nazi doctor Josef Mengele."

Greaves is in the midst of drafting a letter of complaint to the California psychology board. It's part of ongoing activism against what he calls a sham practice.

"If you take somebody who's mentally vulnerable and if you give them a delusion, give them a conspiracy theory, more often than not, they're gonna treat that as a religion, and they're really going to grasp onto that," he said.

It seems to ring true in Jordan's case. In a rambling, 20-page note found in the hotel room along with the body of her child, she said she had intended to kill herself after killing Jude because she believed she was being pursued by a host of dangerous characters, and it was her only way out. She has called the killing of Jude a "mercy killing."

"I didn’t see any way out of this situation,” she testified, according to the Washington Post. “I made a decision that I was going to end my life and Jude’s life.”