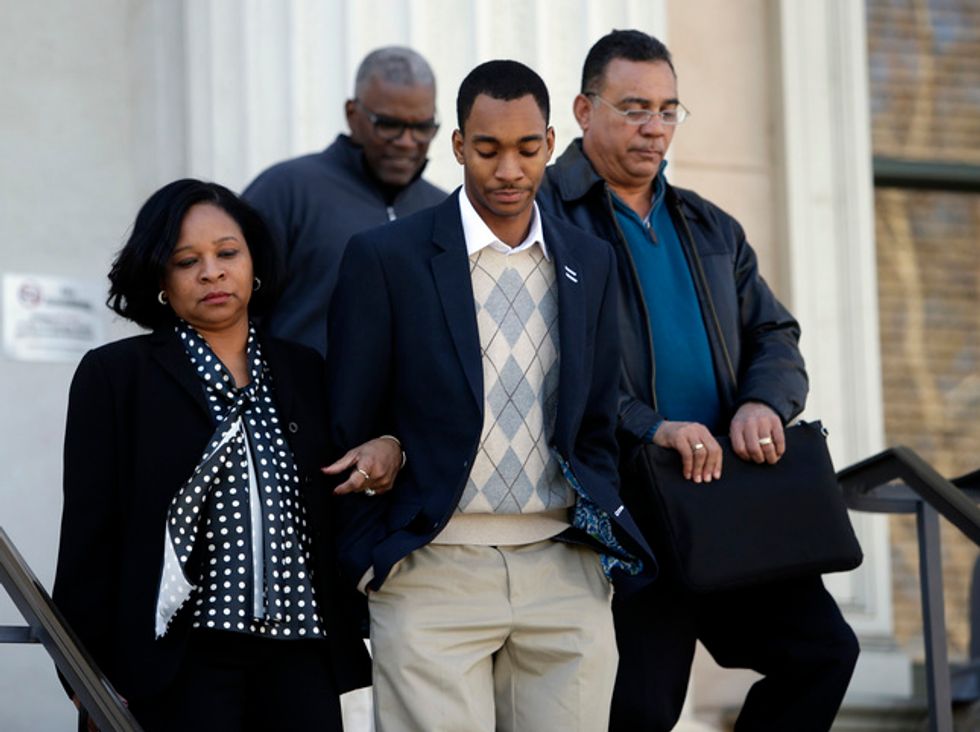 Donald Williams Jr., center, walks with his parents, Nancy and Donald Williams, out of Santa Clara Superior Court on Monday morning, Feb. 1, 2016, in San Jose, Calif., after the start of a trial against the three defendants who allegedly assaulted him in a racially-tinged 2013 incident in the dormitories of San Jose State University. (Karl Mondon/Bay Area News Group)

Donald Williams Jr.'s parents were shocked to find a the Confederate flag posted in the common room of their son's dorm. It was accompanied by a white board that featured the N-word and a swastika. But that wasn't the worst of what Williams endured as a freshman at San Jose State University.

In September of 2013, one of his seven white roommates came up behind him and placed a U-shaped bike lock around his neck. Williams struggled to be released for five minutes before his roommate finally gave him the key. A week later, three of his other roommates attempted to do the same thing but failed when Williams engaged in a scuffle.

There was also an incident when Williams, who is reportedly claustrophobic, was locked inside a closet. His roommates assigned him nicknames such as "three-fifths" and "fraction," which referenced how the Constitution once counted black slaves.

Despite the racially charged and abusive behavior, which were pieced together by police statements and an independent investigation, an all white jury deadlocked on the hate crime charges and ultimately failed to convict the suspects. Instead, Colin Warren, Logan Beaschler and Joseph “Brett” Bomgardner were found guilty of misdemeanor battery after “offensively touching” Williams during the bike-lock prank, the San Jose Mercury News reported.

Sentencing is set for March, and the students face a maximum of six months in jail. According to the Washington Post, they're unlikely to serve any time due to the absence of a hate crime conviction. They're likely to get off easy with community service instead.

Ultimately the jury believed that the actions taken by the students were just pranks that went too far as opposed to hate crimes. But the fact that the students forcefully put a bike lock around Williams' neck and didn't deal with felony assault charges is ludicrous.

The Santa Clara County District Attorney Jeff Rosen disagrees that what Williams went through was nothing more than pranks, and is considering pursuing a retrial.

“Prejudice is not a prank,” Rosen said. "This violence did not happen in a historical vacuum. This violent act was done to a young black college student by five white men, an injustice inflicted upon him because of the color of his skin.”

Often times when debates about white privilege come about, white individuals believe it's a denial of their own struggles and the hard work they put into their success. But white privilege is simply getting the benefit of the doubt by those in authority and the community.

The jury in the Williams case decided to give the white students the benefit of the doubt by believing that their actions were simply meant to be pranks and nothing more. But if the tables were turned and the races were reversed, does anyone actually think that black students would get the same treatment? Anyone who says "yes" is either incredibly naive or in denial.

We live in a country where black 12-year-old children like Tamir Rice get shot by cops within two seconds for playing with toy guns. There were no questions asked in that case. Rice didn't get the benefit of the doubt.

We hear arguments using words like "thugs" and "criminals" to describe unarmed teens like Trayvon Martin after he was shot and killed simply for being black and walking through a gated community. Trayvon didn't get the benefit of the doubt. Instead, his past was torn apart and allegations of marijuana use were plastered all over the press to smear his character.

These were kids who didn't enjoy the same privileges I get to enjoy. That's not a knock on my hard work or my success, but it's an acknowledgement of certain struggles that I never had to deal with.

The jury's ruling in the Williams case is troubling because it sends a strong message that a hostile environment in an educational setting is acceptable as long as the victims are minorities. I worry that something that could have been a learning experience has only embraced and emboldened hatred.