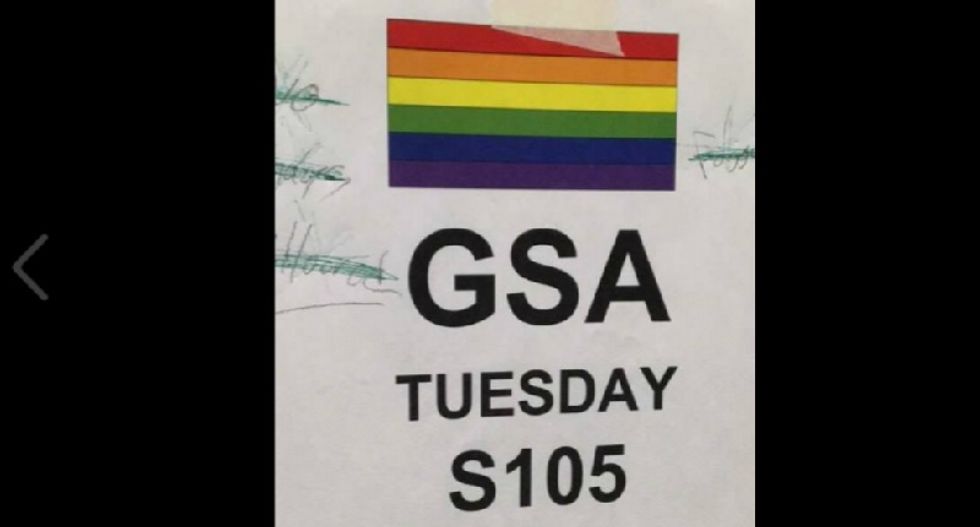 Anti-gay parents at a Tennessee high school are planning a rally Monday against a school club for LGBT students and their straight allies, the Tennessean reports.

The new club, called the Franklin County High School Gay Straight Alliance, or GSA, has faced controversy since it formed in the rural community. It may face even more adversity now that parents John Wimley and Chris Ball started a Facebook page where they are encouraging parents to "stand against" the club meeting at school.

Wimley said the LGBT student group represents a slippery slope to having terrorist group ISIS on campus. In one post he shared a picture of the club's meet-up flier, writing "OK F.C. IF WE DO NOT BAN TOGETHER AND STOP THIS B.S. THE NEXT THING YOU KNOW THEY WILL HAVE F.I.M.A. (FUTURE ISIS MEMBERS of AMERICA) ‪#‎PUTGODINSCHOOLSPLEASE‬"

According to the Tennessean, the students have faced a backlash since launching the club.

“We all have common troubles,” student Allie Faxon said in an interview with the paper. "By having the club, even people who aren’t out can come and have a place to be themselves.”

As if being compared to terrorists wasn't enough another man compared the high school students to drunk drivers.

"We should change the constitution so that drunks can drive drunk, they were 'BORN THAT WAY' lets don't discriminate against these poor pathetic people and their life styles," wrote Shane Beckham. "I saw a drunk go into a store and the clerk wouldn't sell him any beer, so he just put it back on the shelf, he should be like the queers ans sued that store for everything they have, damn shame he was discriminated against because of how he was born!!!!!"

On the school board agenda Monday are "action items' relating to student groups on campus, which has members of the GSA concerned in light of the controversy.

"I am very concerned that the issue of 'Student Clubs and Organizations' has been added as an ACTION item to the Agenda for the BOE meeting on Monday," the group's Facebook page administrator wrote on Friday.

"Student clubs and organizations" is listed as a topic of discussion on Franklin County school board's agenda.

The GSA has faced such harassment since it formed as some students wearing anti-gay "straight pride" shirts. The club has also had its posters and fliers torn down and defaced, the New Civil Rights Movement reports.

When asked by the Tennessean about comparing the high school children to ISIS, Wimley remained unapologetic.

“Maybe it was a mistake,” Wimley told the paper. “But it was a statement that needed to be made.”