Beyonce's Formation – a rallying cry that couldn't be more timely 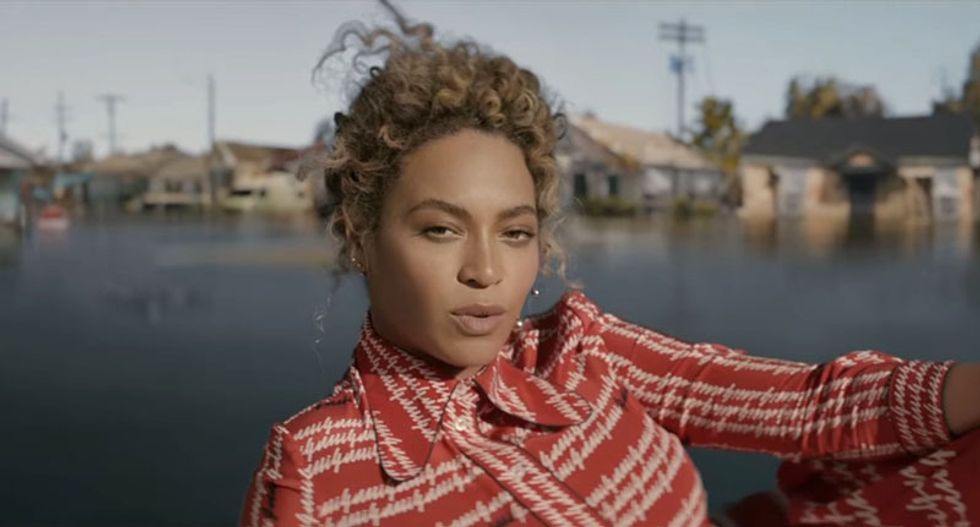 Beyonce in a music video (Screenshot)

Fully realising a masterpiece can be a double-edged sword. In the two years since Beyoncé “changed the game with that digital drop ”, I’ve frequently wondered just how she could possibly follow it.

If Beyoncé herself has been beset by such concerns, it doesn’t show. On Formation, she doesn’t just answer that question, but savours every delicious moment of making her statement. Just listen to her voice – or rather, voices; hanging out with Nicki Minaj (and indeed co-writer Swae Lee, one half of rap scamps Rae Sremmurd ) has clearly had an effect. There’s the amused drawl of “y’all haters corny with that Illuminati mess”, the barely suppressed giggle about keeping hot sauce in her bag, the sudden giddy exclamation as she lands on the word “chaser” in the chorus. It’s one of Beyoncé’s most playful performances to date: she treats the Mike Will Made It -produced beat the same way a cat treats a ball of wool. With its rubbery springing steps giving way to horns, clattering martial tattoos and the kind of heavy bass that goes straight to your hips, there’s plenty for her to toy with; its loose approach to structure makes it more akin to a freeform dance routine than a conventional pop song.

Musically, it transpires that 7/11 – the rowdy bonus track appended to 2014’s re-release of Beyoncé on which she yelled about alcohol over harsh, metallic beats – was less a throwaway leftover and more of a signpost. But where the hood signifiers of that banger seemed designed to demonstrate that the impeccably poised artist could cut loose as messily as anyone, Formation’s declarations of identity are carefully chosen for political weight and layers of meaning. “I like my negro nose with Jackson 5 nostrils,” she declaims in the half-rapped, half-sung cadence that’s served her so well ever since she haughtily flipped In Da Club in 2003. It’s radical self-love, of course, but the metaphor is a flashing reminder of the troubled alternative that has faced black stars before now.

The video, meanwhile, opens with the singer crouched on a New Orleans police car, half-submerged in a flood – and closes with her lying back as the water engulfs both her and the vehicle. In between, footage of the city post-Katrina is interspersed with grainy shots of dancers shot from above, as though from a police helicopter; opulent gothic mansions straight out of the antebellum South, now owned by Beyoncé and her band of black women in vintage lace. Most effective of all is an extended shot of a child dancing in front of a row of riot police, who raise their hands in response to his moves before the camera cuts to graffiti reading “STOP SHOOTING US”.

Between the child dancers and the vintage constumery, there are echoes of Missy Elliott ’s classic videos here; overall, it’s a striking way to underline the ways in which southern blackness – the culture and experience of it – is important to Beyoncé in 2016. As with her hyper-specific lyrics, it feels notable that she seems increasingly uninterested in universality; Formation’s references are designed for maximum resonance – or perhaps alienation, depending on where you stand. It’s a song ostensibly about Beyoncé’s identity that forces the listener to acknowledge their own identity – a bold move from the world’s biggest pop star, who over her career has been no stranger to the kind of song written so vaguely as to apply to anyone and anything. The presence of New Orleans bounce rapper Big Freedia works in a similar fashion; Formation may be Beyoncé’s blackest song yet, but thanks to Freedia and a healthy dose of exhortations to slay, it’s also her most gay.

Beyoncé’s abiding interest in money has made for some of her best moments; not in a reductive materialist sense, but because she has a deep understanding of how money informs social and romantic relations. Bills Bills Bills was never a gold-diggers’ anthem but rather a study of the way dating dynamics can turn on finance; on Irreplaceable , what hurt her the most was seeing her boyfriend “rolling her round in the car that I bought you”; on Rocket , Beyoncé even gave a sly wink to this trait of hers, whispering at the carnal climax: “What about that ching-ching-ching?” Here, a particularly terrific stretch sees her troll straight men by flexing her economic muscle over them: she’ll reward a good lover with a fast food meal, and – insert casual shrug – maybe even let him go shopping, too. When Drake, a rapper fêted for his sensitivity, can insult a rival simply for having a more accomplished girlfriend , Beyoncé revelling in her ability to keep her man in fancy treats feels like a much-needed riposte (and, in a way, a flip of the scenario her teenage self described in Bills Bills Bills).

The central tension in Formation is between its playfulness and the anger underpinning it; often, there’s a disconnect between Beyoncé’s carefree voice and the powerful images on screen. As it goes on, though, the significance of the dance becomes clearer. If Beyoncé’s self-titled album was a fundamentally personal statement, the painstaking work of a woman engaged in deep analysis of herself, her desires and her place in the world, Formation finds her turning her attention outwards. Ultimately, it is a rallying cry, and it couldn’t be more timely; when Beyoncé begins to exhort her ladies to get in formation, it’s the sound of a militia being prepared for battles ahead.