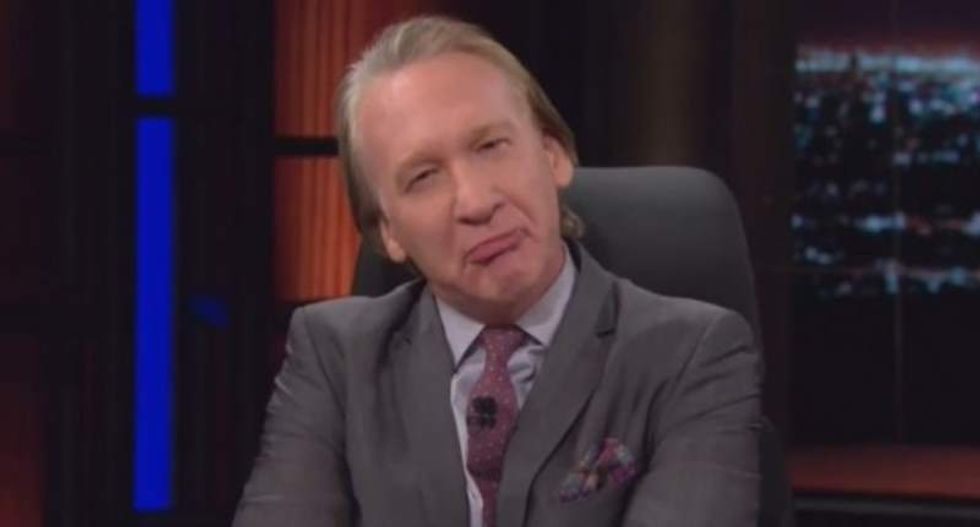 Bill Maher has a message to #BlackLivesMatter activists who are challenging Hillary Clinton, just as they've challenged other potential candidates: you are 'f****** idiots."

The "f****** idiot" Maher was chiding was, presumably, Ashley Williams, the Black Lives Matter activist who disrupted a private fund-raising event, which Clinton appeared at Wednesday. Williams held up a towel which had “we have to bring them to heel,” written on it, a phrase Clinton had used in a 1996 speech  in support of her husband's a Violent Crime Control Act. It was in this same speech that she would say,

They are not just gangs of kids anymore. They are often the kinds of kids that are called ‘super-predators.’ No conscience, no empathy. We can talk about why they ended up that way, but first we have to bring them to heel.

If that language sounds racially coded to you, that's probably because it is. Michelle Alexander, author of The New Jim Crow, writes that Clinton "used racially coded rhetoric to cast Black children as animals."

Maher and his guests made so many fascinating points during the roundtable part of Real Time. To do them justice, I'll quote verbatim what was said, and organize them under headings that are my own.

Bill Maher: are you sure there aren't more racist people, like pro-slavery Trump supporters, who you should be going after, guys?

Does this person [who interrupted Clinton] realize that Donald Trump in South Carolina twenty percent of the voters who voted for Donald Trump disagree with the emancipation proclamation.

And this is who your going after? This is where we start the battle? You fucking idiots! ??:

Let's be fair, I don't think they were calling, just like when Kanye West said "George W Bush doesn't care about black people" he wasn't calling him a racist although George Bush heard racist. They are not claiming as Black Lives Matter that Hillary is a racist.

What they're saying is that negative racial consequences flowed from mass incarceration...

Michael Eric Dyson: Hillary should be forgiven for her comments suggesting that young black men are 'super predators.' I wish I could say Bernie Sanders had apologized for his racism, which I won't actually define.

What they're saying is that negative racial consequences flowed from mass incarceration and by the way when they accused her of talking about the super predator which she did let's note the fact she apologized. Bernie Sanders...

And it was taken out of context. She was not saying black people are super predators.

Michael Eric Dyson: Right! She both apologized for suggesting Black criminals were super predators but she was  only quoting someone who had called them that. [It's not true, but why not cover all bases]

No, no, no, she was saying super predators, the language that [political scientist] John DiLilly or somebody was using about black criminals

Yes, she did say that.

Michael Eric Dyson: Back to my original point, then, which is that she did apologize!

But here's my point, that she at least apologized and acknowledged that that was a problem

Michael Eric Dyson:  But enough about racism! Let's talk about why it's sexist to associate a woman with her husband's policies when she was first lady, even if she stumped for said husband's policies and is in large part running off of his legacy.

Michael Eric Dyson : I think we can all agree that the Clintons are less racist than the Republicans, who lack a basic humanity.

the Black Lives Matter implicitly are proving the humanity of the Democrats because at least they're humane enough to respond in kind to them. The the Republicans don't give a flying damn about what's going on there and therefore they prove they're inhumanity. So in one sense they are affirming it.

Mark Ruffalo: but shouldn't we have higher standards for the Democratic Party, than, well, they're less racist than Republicans!

As a party, the party that was supposed to be for black people has let them down continuously and that's why the Black Lives Matter movement is going after the Democrats. Democrats are supposed to be on their side. They never were? by Republicans

But look, as a person, as a person who believes that Hillary Clinton will be the next president of the United States of America I'm telling you... I think that Hillary Clinton is not only the smartest person, the most prepared person, but the person who has given the most credible, empirical analysis of race in the last twenty years by a major American politician. I'll stand by that.

Bill Maher: People who criticize Hillary Clinton have the blood of an inevitable Donald Trump presidency on their hands!

You wanna tear Hillary Clinton down? Great, then enjoy President Trump. You only get two choices in America, two choices.

Joanna Coles:  isn't it great that activists with Black Lives Matter, which is totally legit, are even allowed past security?

But it's perfectly legitimate to keep black lives matter at the front of what people are thinking about right? Because if your not there showing your issues someone else is there instead and I think you know it was unfortunate the way she did it but at least she had even been allowed into Hillary's thing.  I mean she would have been blocked from Trump's

Mark Ruffalo: I mean, she was the only non-white person there!

When you look around at the crowd she's the only black person there. It's a five hundred dollar a plate fundraiser.

Why is that a problem? Do they have to be everywhere giving you money?

Mark Ruffalo: What do you mean by "those people?"

The black people! Really, I can' I can't use the term "they?" That makes me a racist?  I'm the problem too!

You reacted when I said "they."The Blacks!"

Michael Eric Dyson:  I'm not calling you racist, bro. That was Mark Ruffalo!

However the reason we're talking about this today is because they have been effective in forcing a conversation that we'd rather avoid but at the end of the day I'm rolling with HRC to the end because I think she gives a serious indication of what's happening in this country racially.

Michael Eric Dyson: If only someone whose name rhymes Marack Lomaba were as good to Black people as Hillary Clinton is!

So we can have Black Lives Matter articulating their concerns and Hillary Clinton responding to them better by the way then the occupant of the White House and others who claim to be the friends of African-American people as well.

On January 6, 2021, while MAGA enthusiasts rioted in and around the U.S. Capitol, Melania Trump was asked if she'd like to tweet a statement encouraging peace and the former First Lady responded with a one-word answer.

According to ex-aide Stephanie Grisham, she personally sent a text to Melania on Jan. 6 asking "Do you want to tweet that peaceful protests are the right of every American, but there is no place for lawlessness & violence?"