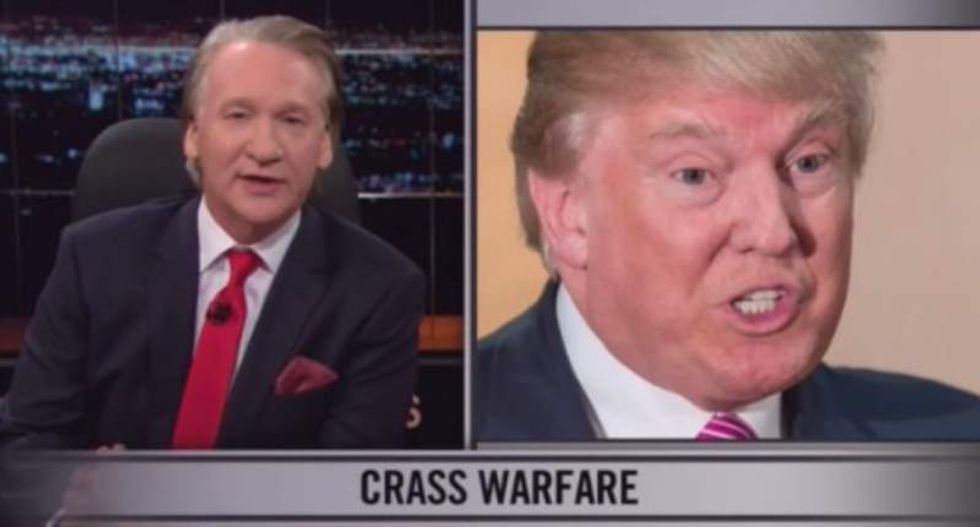 Bill Maher closed out Real Time on Friday by undermining Donald Trump's complaints over the use of foul language by former Mexican President Vicente Fox.

"Talk about the pot calling the kettle orange," Maher quipped, before showing a barrage of clips of the Republican presidential front-runner cursing during various public speeches.

The feud between Trump and Fox began on Thursday when Fox denounced Trump's oft-stated promise that, should he be elected president, he would make Mexico pay for the construction of an elaborate wall along the US-Mexico border. Fox said during an interview, "I am not going to pay for that f*cking wall," and doubled down on the statement on Friday after Trump demanded an apology.

However, Maher said, the rise of "Andrew Dice Trump" in the race revealed that voters are enjoying his coarse brand of speaking.

"They kind of like it when a politician drops the facade and talks the way we all really talk," he explained.

At that point, Maher staged his own State of the Union address -- an illustration, he said, of where the shifting tone in political discourse could go. Casting himself as the president in the scene, he quickly announced that "the state of our union is f*cking awesome."