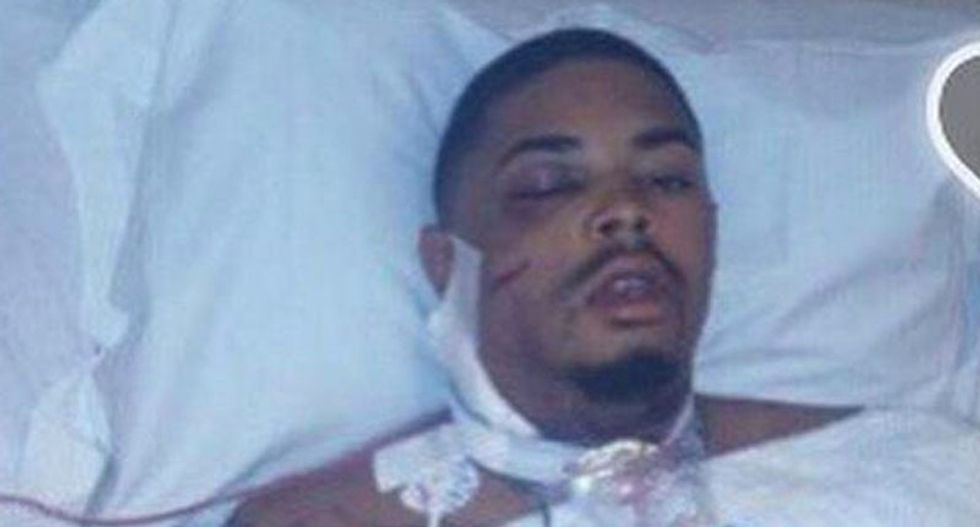 For the more than 240 days since Keith Davis was shot in the face by Baltimore police, he has nursed his wounds from a jail cell, facing a barrage of charges on allegations that he robbed an unlicensed cab driver and fled. Davis was the first police-involved shooting since the death of Freddie Gray in police custody set off citywide protests in April.

And while Gray became a household name as representative of the more than 1,000 people who are killed by police each year, activists have held up Davis as an example of how Gray and others like him might have been treated by the law enforcement system if they had lived.

On Thursday, a jury found Davis not guilty on all the charges but one. They acquitted him of 14 charges related to the robbery, chase and standoff that ended in police gunfire at Davis, and found him guilty only of possessing a firearm as a prohibited person, which carries a five-year minimum sentence.

Despite a prison sentence that Davis’s supporters consider unjust, the verdict is viewed as at least a partial victory by Davis and activists.

Davis “feels like this is a win”, said his fiancee Kelly Holsey, who led the activist movement. “He set out to prove his innocence and did that. And the charge he was found guilty for is really a technicality.”

Related: What happens when you survive a police shooting in Baltimore?

The state’s attorney’s office – headed by Marilyn Mosby, who came to national prominence when she announced charges against officers in connection with the death of Freddie Gray – has faced increasing criticism from campaigners regarding this case. Baltimore Bloc, an activist group, has repeatedly alleged that Mosby’s office was involved in helping the police department cover up the shooting.

On the stand, the officers offered conflicting and contradictory accounts of the incident. The state alleged that Davis got into the car of Charles Holden, who was operating an unlicensed cab, and tried to hold him up. Police testified that they chased Davis after they saw him flee from the car carrying a gun, and followed him into a garage where they saw him point a gun at them from behind a refrigerator. Four different officers opened fire, ultimately discharging more than 40 shots.

Police never offered a clear story about what happened that day as their timelines varied considerably, leaving room for reasonable doubt. For instance, Officer Lane Eskins testified that he never lost sight of the suspect, but Sergeant Alfredo Santiago’s account placed Davis in the garage while Eskins was still a block away.

But a bigger problem with the state’s case came from the civilian witnesses. Holden, the unlicensed cab driver who was held up, gave a description at the time of the event that did not match Davis. During the trial, Davis’s attorney Latoya Francis-Williams walked Holden directly in front of the defense table where Davis sat, wearing a blue blazer, a white sweater, a plaid shirt, and glasses. “To my recollection that don’t look like him to me,” he said.

Another witness, Martina Washington, who was in the garage when Davis ran in, testified that police had influenced her description of the man who entered the garage. “They keep saying all the stuff to you and telling you what they want you to say,” she said. “They was telling me ‘is the guy light-skinned? Was the guy light-skinned?’… That’s why I said ‘Yeah.’ I’m trying to get out of here.”

Davis did not testify, but in a jailhouse interview in January, he told the Guardian that he was never in Holden’s car and was walking down the street holding his phone when Holden’s car pulled up and police began to run. “They just centered on me. When they ran towards the crowd everybody kind of broke away from the crowd and ran in a direction,” he said. “I wasn’t even the only one that ran in that direction but they ended up chasing me.”

Davis has maintained that he never had a gun. But the police department’s fingerprint expert testified that her report found an irrefutable match between the partial prints left on the gun – found on top of a refrigerator within the garage – and Davis.

In closing arguments, the defense alleged that the entire case was the result of a cover-up. “They’re in damage control,” Francis-Williams said. “Why? Because they shot the wrong person … They double down hoping that no one will notice, that an innocent man will be convicted and we’ll close the books on this.”

“There’s too much crime going on in Baltimore to think this guy is that special to waste time to make up evidence,” LaZette Ringgold-Kirksey, the prosecutor, responded in her rebuttal.

At the same time the trial was going on, Mayor Stephanie Rawlings-Blake was at a hearing on police reform at the state capitol advocating that police be held to an even higher standard. Under current policy, police are advised to give a statement within 10 days of an incident, and Rawlings-Blake is asking that the window be reduced to five days. But in the Keith Davis case, four shooting officers – Sgt Santiago, Officer Eskins, Officer Catherine Filippou, and fficer Israel Lopez – all testified that they didn’t give statements for more than 180 days after the shooting.

Police spokesman TJ Smith said that the officers did not give statements because they were under grand jury investigation until November, when the state’s attorney declined to prosecute the officers for shooting Davis.

At the end of Davis’s trial, the jury rejected all of the charges stemming from police testimony. But, evidently, even the clearly contradictory accounts from officers and witnesses could not dispel the fingerprints that said to the jury that Davis had been in possession of the gun at some time. Because he had previously been convicted of a felony, Davis was not allowed to possess a weapon.

Francis-Williams is seeking legal relief. “I am satisfied that the jury saw through the crocodile tears of the officers, but still have to push hard for immediate relief,” she said.